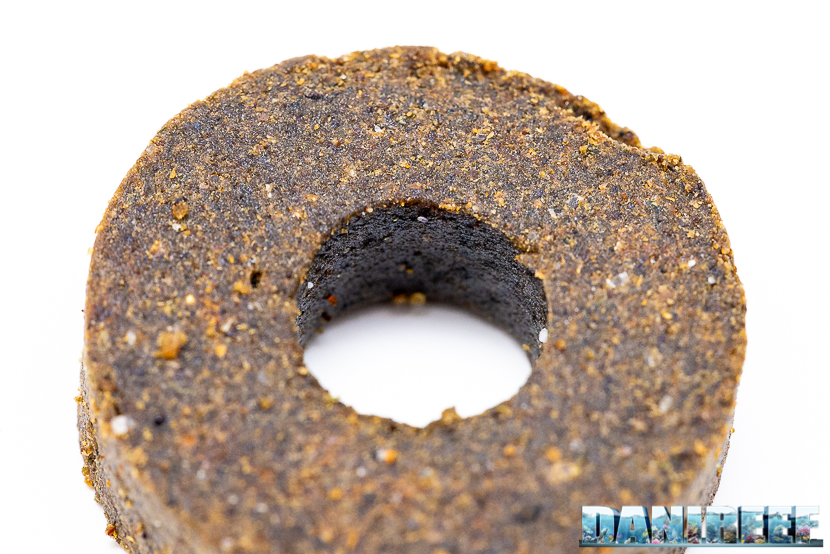 When we think about fish food the first thing that comes to mind is the classic flake or the granulate, not something like the grazer,but both we and our fish really liked this food.

Its composition is similar to the Vitalis Marine Pellet, which we talked about last year. The vitamins are the same, while the analytical composition is slightly different.

But the main feature of Vitalis Marine Grazer Mini is its unusual shape: a thick disk with a hole in the middle. This shape is incredibly useful; you can even insert the food in a special suction cup and then hang it inside the aquarium. The fish come and graze on it as they would do with food in the wild. They peck the food a little, go away, and come back. Spectacular.

Just remember to take the uneaten out after a few hours in order to prevent it from decomposing. The fish really like it! Moreover, it’s very soft so you can pull little tidbits off of it, which the bigger fish like very much. 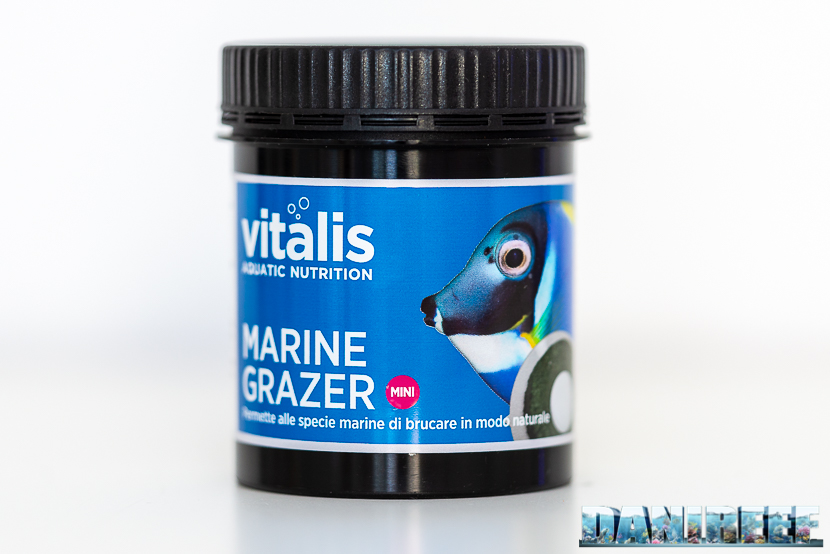 Like its “brothers” Marine Grazer Mini is made from the usual fish flour, with molluscs, crustaceans and vegetable products. It’s a complete meal for fish that eat more than algae.

Marine Grazer Mini is available in two sizes, one for public aquariums (and it loses the suffix “Mini”), and one for us aquarists.

Different from what we’re used to, inside the container are slices that don’t fill it entirely like the granulate does. The first time seeing it is a strange sensation. 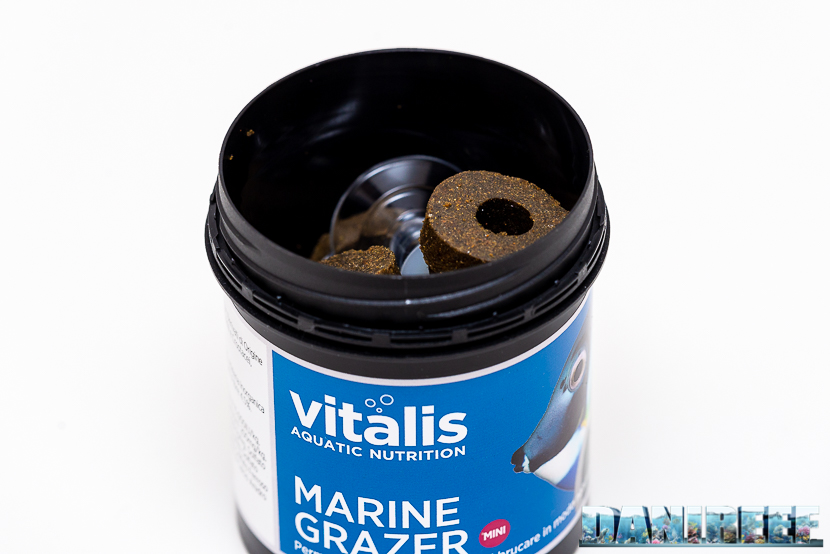 The suction cup, pictured below, is also included. 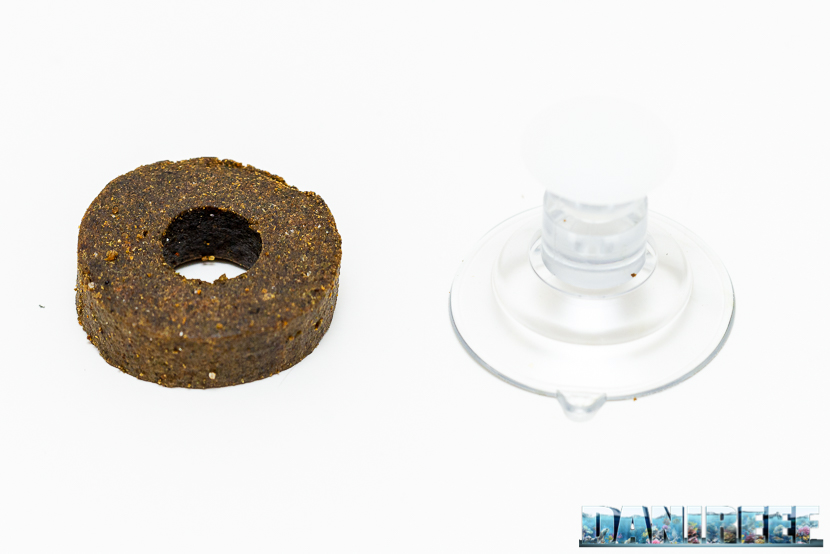 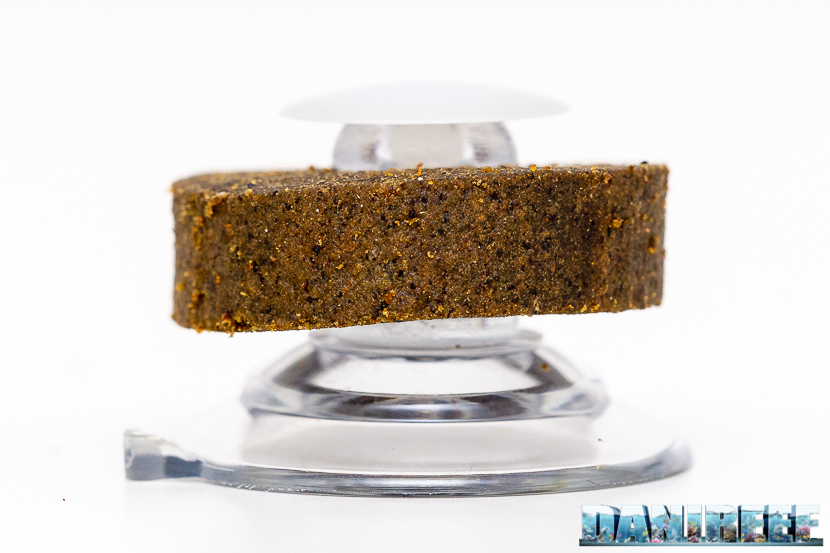 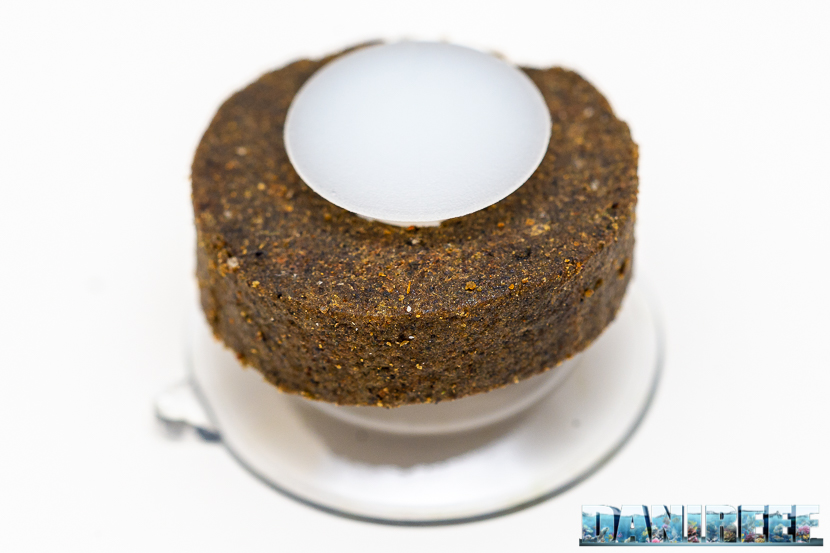 The feed is made with the following ingredients:

The nutritional analysis, which shows a predominance of proteins:

Pictured below is a visual representation of the same analysis:

As we can see from the chart, the food is mainly protein, though in smaller quantity than the Marine Pellets from Vitalis, and has 12% fat. Because of this, it’s suitable for fish that normally eat other fish or crustaceans. The protein count is far below the quantity of similar food (50.3%), while the fats are slightly over (10.5%). The fibers, on the other hand, are more than the double: 4.5% compared to 1.9%. The remainder is moisture and inorganic matter, which is often assimilated to the raw ashes in other feeds.

The analytical composition stops at 88.3%, so we don’t know about the remaining 12%. Moisture, other, and inorganic matter is over 50%.

And we have two charts:

In the first one, comparing the vitamins, we can see that Vitamin A is predominant. Remember that vitamin A promotes healthy growth, strengthens eyesight, protects the skin, and acts positively on fertility.

For an in-depth review of fish feeds, we recommend this important article from a little while back:fish feeding

In order to give you an idea of the behavior in aquariums, here is a quick video that we made during a feeding: