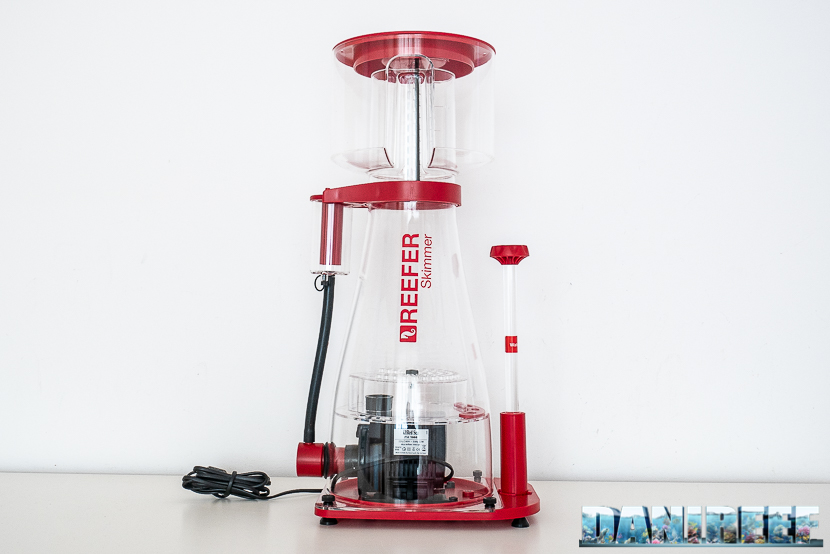 The Red Sea RSK600 Reefer Skimmer is a skimmer designed to be almost entirely maintenance free, and it’s the only one we saw that aspires more air than declared, much more air.

We tried it for several months, and now we can say that the RSK600 really surprised us. We used it in a 400 liter aquarium full of SPS and a lot of fish. We bet it will be the first of a long series of skimmers; it’s a real revolution.

I’ve never seen anything better made. It’s constructed from spectacular acrylic, and it’s obviously made in series. No flaws. Amazing. The sucked air declared is 750 l/h and the treated water 1,500 l/h, but what we were most curious about was the company’s claim that this skimmer doesn’t need maintenance. Was it true? Let’s see.

The design of the skimmer is really amazing. 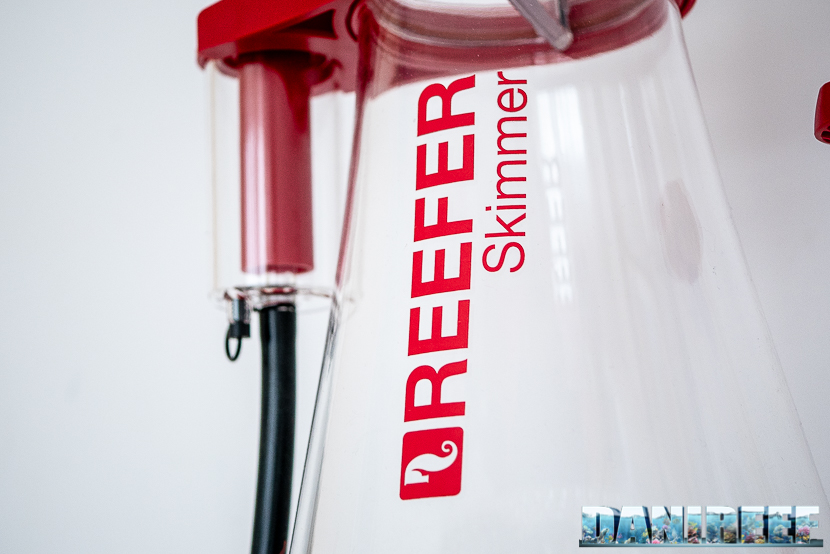 It has a classic layout: internal central pump, upper perforated diffusion plate, and conical central body. The skimming pump is a sicce PSK1000 that takes water from a few centimeters above the bottom. 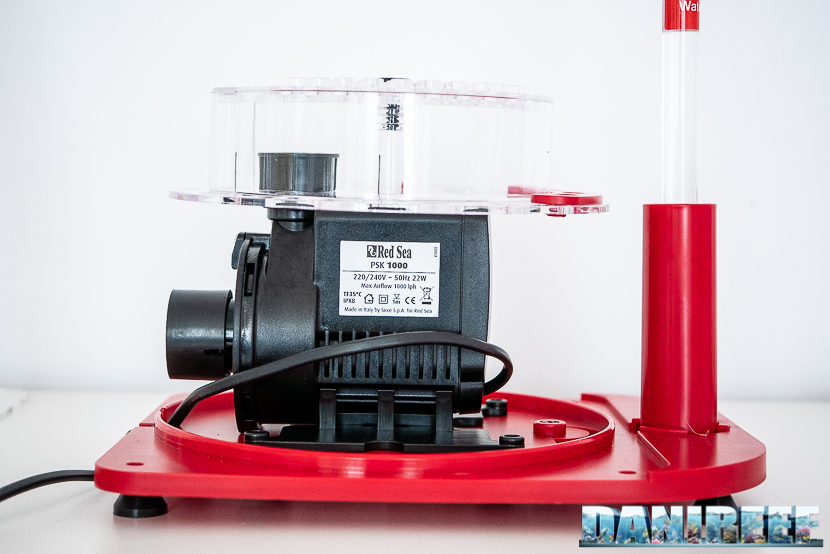 The body of the skimmer has a diameter of 17 cm and it’s about 56 cm high glass included, for a whole volume of, glass excluded, about 9 liters. 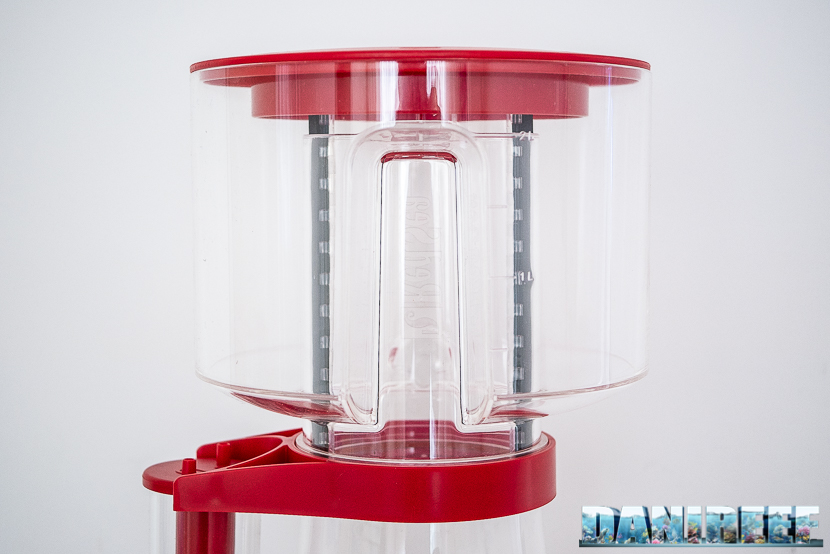 The glass alone has a diameter of 20 cm, and has a capacity of 2 liters; it’s no use in measuring also the internal diameter given that the large countersink would require complicated calculations. Moreover, the glass is graded and we noted that the contained fluid is precise. 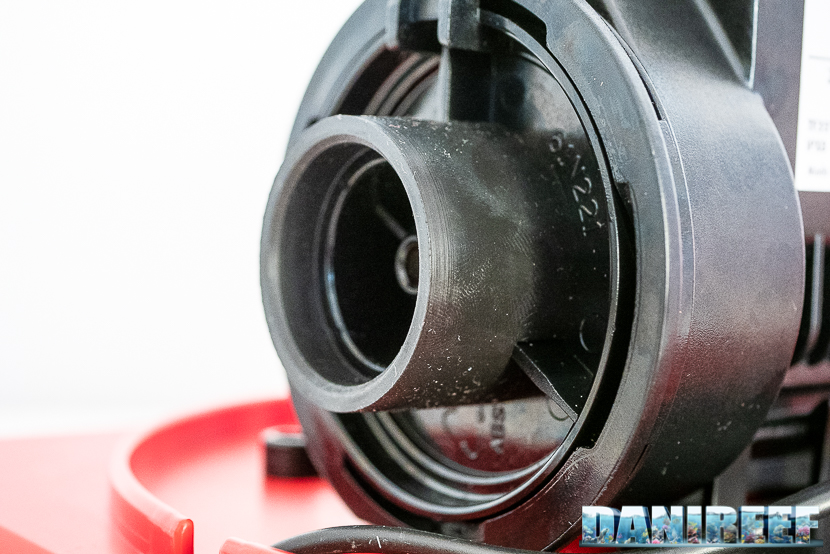 The assembly of the skimmer Red Sea RSK600 is very simple and can be disassembled in a short time. The cylinder stays on the base where the pump is inserted and it can be screwed on with plastic elements. The pump sticks in a base and the perforated plate goes above the higher drain. The building is complete with the glass and the muffler. The glass, for once, doesn’t have to be implanted but it sticks right inside the glass: in fact, the covering has a board with two brushes on the sides, so by rotating the lid you can clean inside the glass and keep the skimmer perfectly efficient every day. 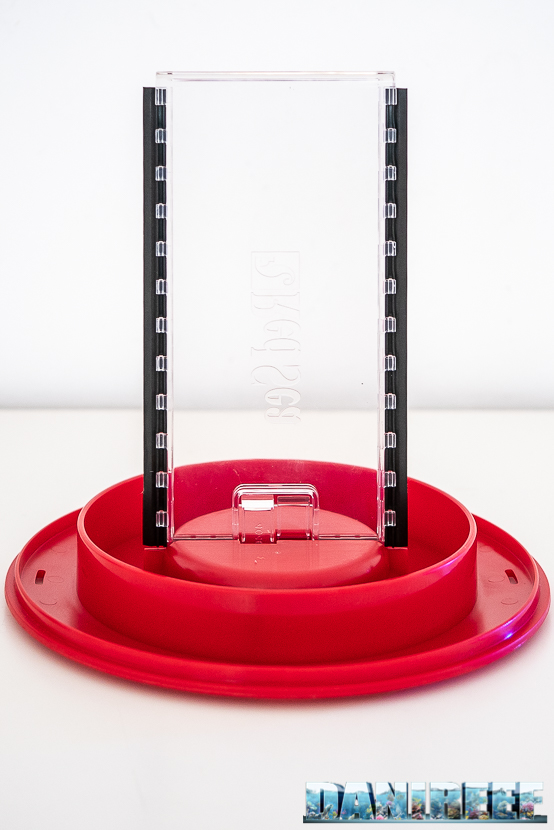 The glass is pretty light, but it’s so well stuck in the base that it isn’t very easy to extract. At the base of the glass there’s a long hole that’s a classic for skimmers. What makes the Red Sea different from other products is that it has a very long rubber tube passing through the hole and ending in a sink. Thanks to this feature you can stretch the tube and drain it inside a container without picking out the glass. This glass remains clean thanks to the brushes and the countersink allows you to always see the level of bubbles inside the glass. 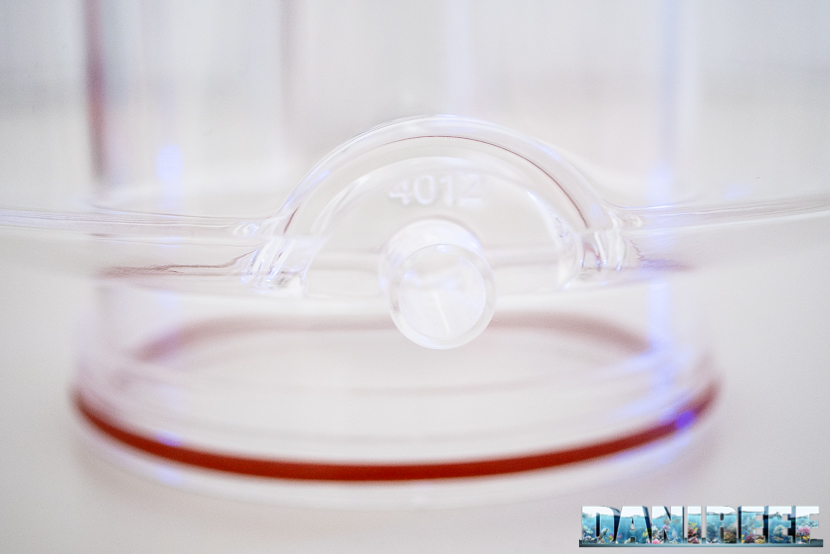 The pump that comes with the Red Sea RSK600 is a sicce PSK 1000, a very reliable pump used in a large number of skimmers.

Because it’s a monopump configuration we don’t have to deal with the quantity of water entering the skimmer and the relationship water/air has already been decided. The suggested level to keep in sump is around 20 cm. 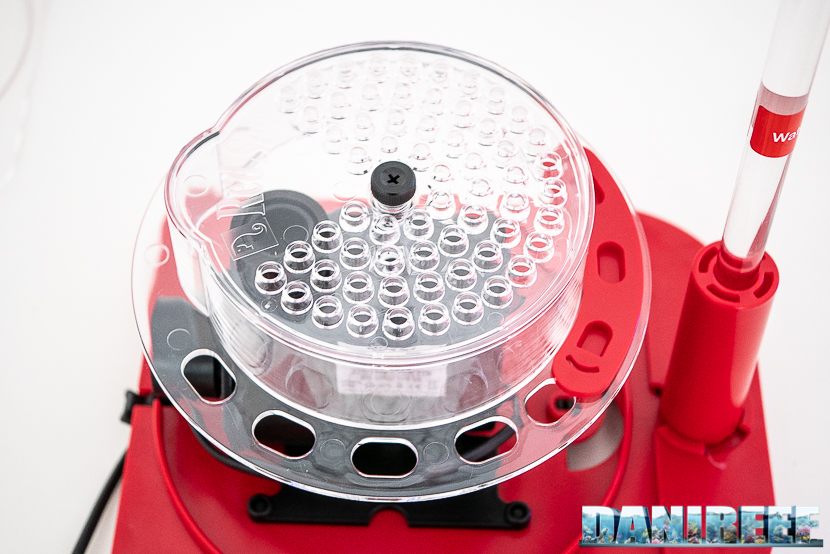 The functioning scheme is simple and linear. Water and air are mixed and sent from down under directly in the pump body that does the mixing work and diffuse them into the cylinder. In this case simplicity is a great value. It works flawlessly and stably. It’s hard to see it going wrong. 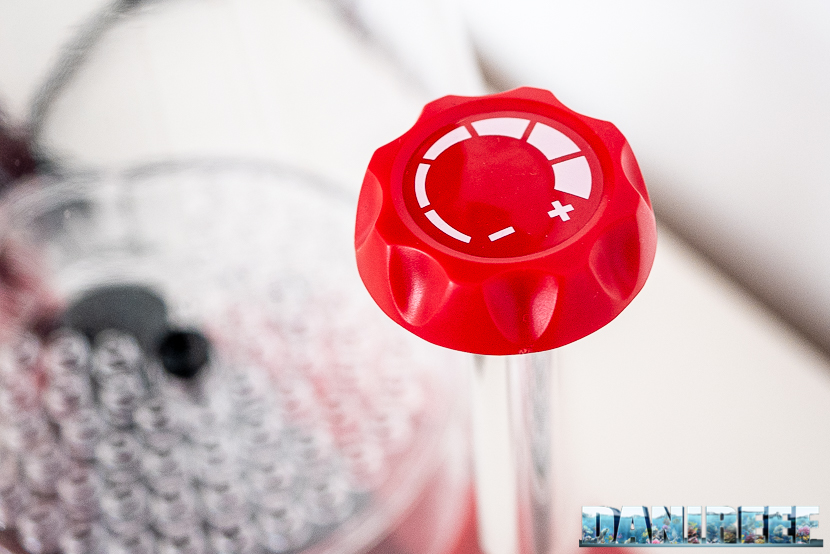 The only way to change the calibration of the skimmer is to rotate the red graded pommel. It adjusts a slider on the base in order to control the level inside the cylinder. The bar of the pommel is really the only downgrade of the skimmer: compared to the solidity of the skimmer, it doesn’t seem so stable… 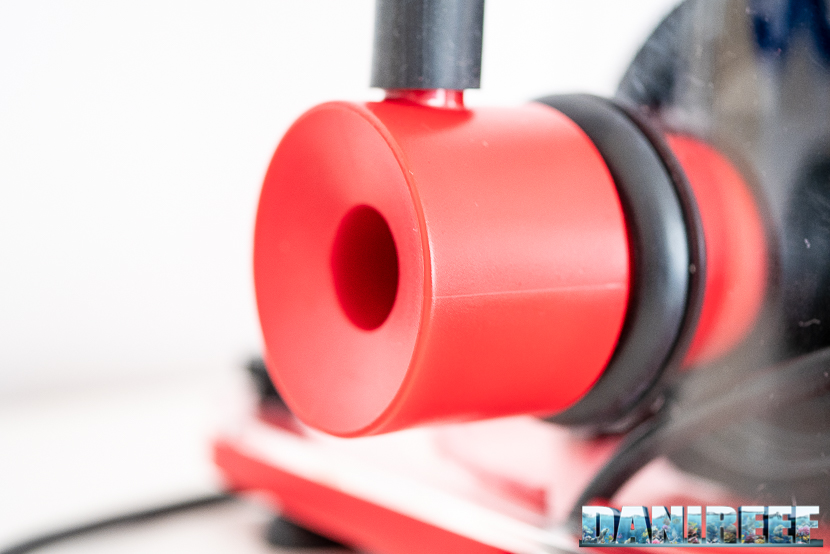 The set up is very easy. You take the Red Sea RSK600 from the (beautiful) box and place it in sump. Sic et Simpliciter as the Latins said. 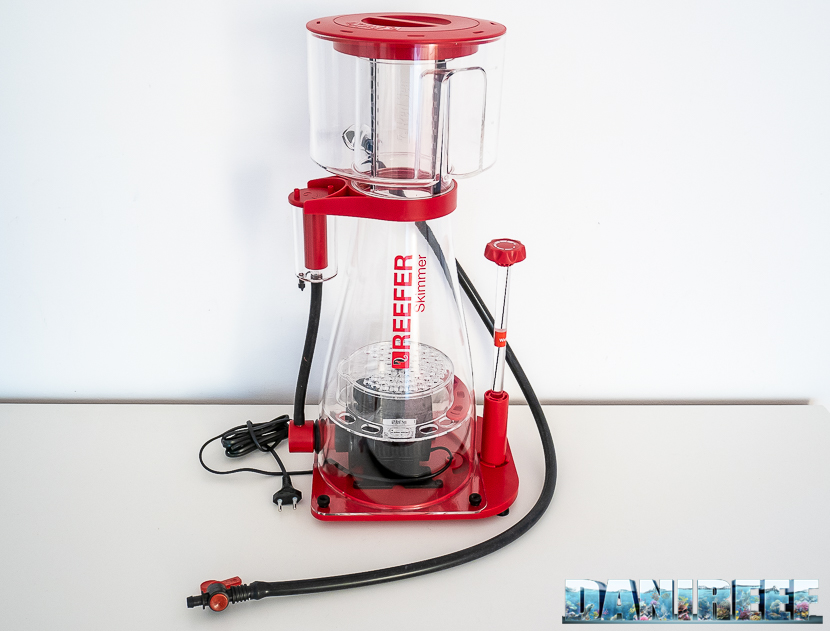 The drain, that is not visible, is free under the base of the skimmer, a feature that makes it very silent. 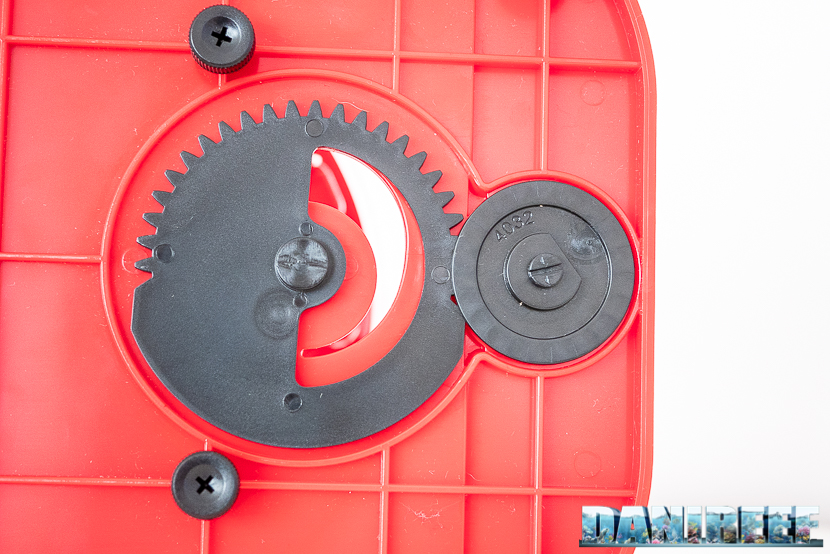 The skimmer needed a few days to break in. The foam fills the body starting from the diffusion plate to the base of the glass. The foam is beautiful, but maybe the bubbles are too big. Visually, the skimming seems very good. 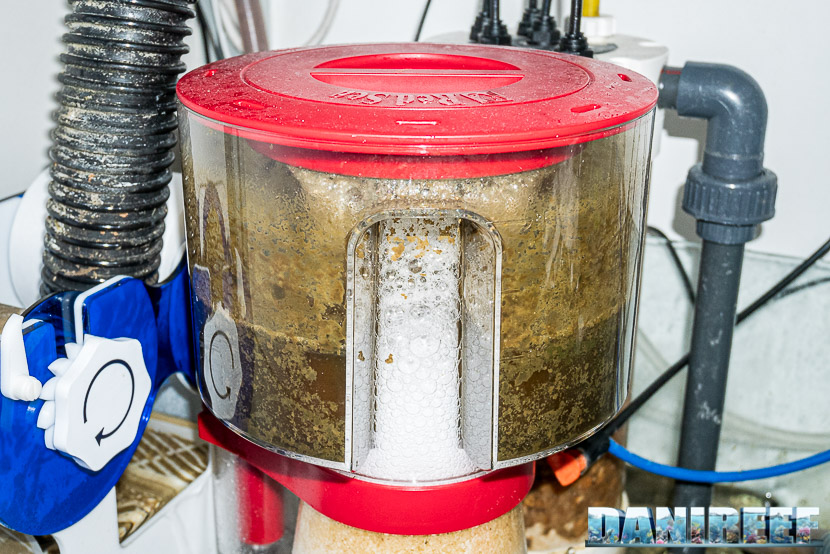 The suggested level in sump is about 20 cm: with this level the precision of the water and the sucking of the air are perfectly in balance. Obviously (and we explicitly say this because there’s someone who doesn’t know) it’s because the skimmer has been built with for that level.  So I suggest keeping it very close to 20 cm, as we did in our test. 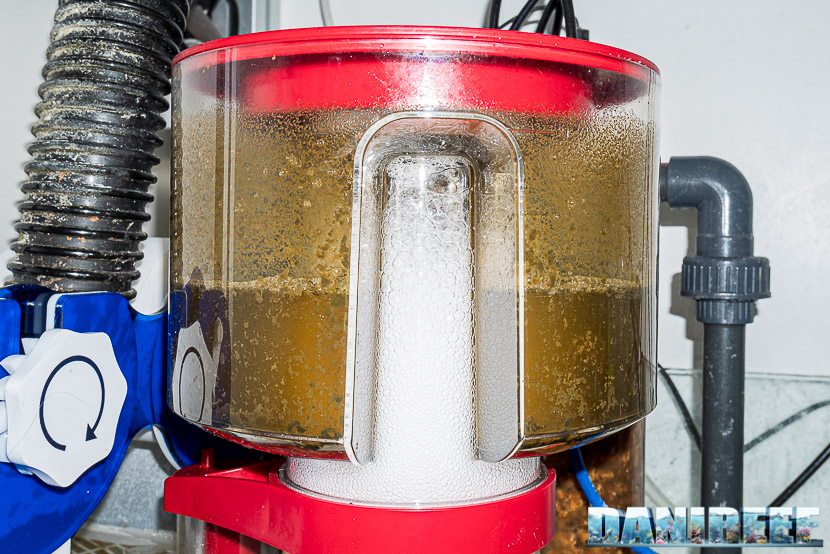 After over 6.5 months of use we can affirm that the Red Sea RSK600 worked perfectly. But especially with very little maintenance!

The RSK600 and the maintenance

Thanks to the internal brushes and the drain pipe, we didn’t have to do any other type of maintenance. We installed the skimmer in sump in February and we went on until summer, when we extracted and completely cleaned it once we came back from the holidays. 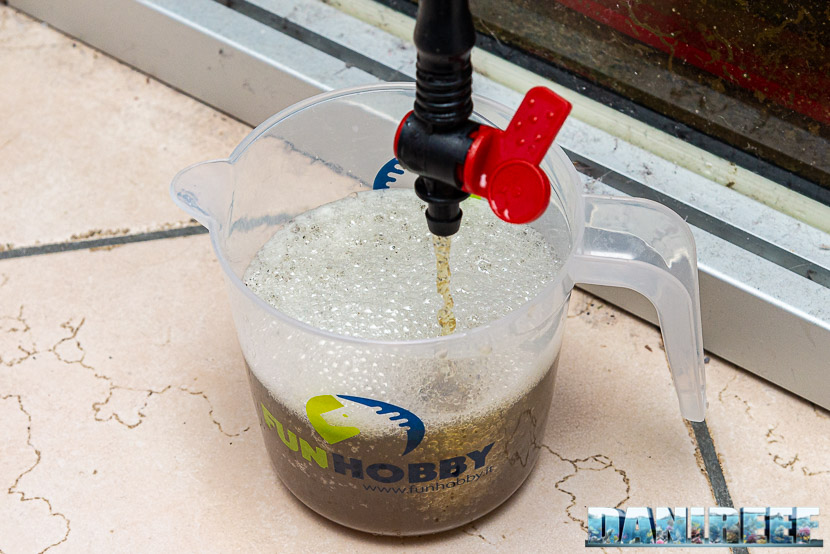 The builder declares a flow rate of 1,500 l/h and an air flow of 750 l/h. These numbers depend on variable factors, among which are the height of water in sump, the height of the water column inside the cylinder, and especially the salinity, that in our case has always been 35 per thousand. The relationship air/water is 0.5.

At this point we would usually show some pictures of the inside of the glass… But we didn’t have to open it, so we don’t have any pictures. We love this feature of the skimmer.

Unfortunately, the particular configuration of the skimmer with a low drain didn’t let us measure the treated water. To measure the air we used our Sander flowmeter, which measured the air from a minimum of 100 l/h to a maximum of 1200 l/h; the values had to be increased by 10% to make up for the losses in the tool. 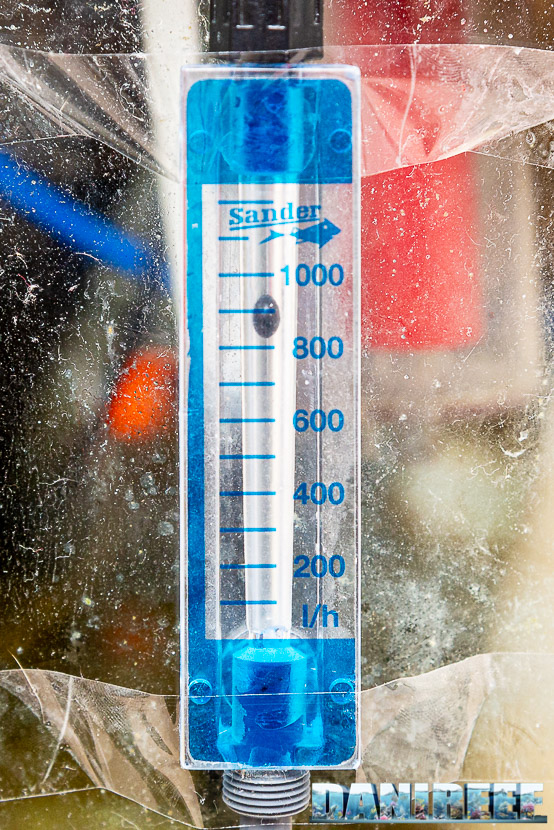 So we obtained a flow of treated air of 1045 l/h (950 measured + 10%), with the air completely open. The value was very stable. The incredible thing is that this value remained the same with both a clean and dirty skimmer. And it’s much higher than declared, 40% higher, to be precise. A great result.

The skimmer is very silent, we did three tests, at less then a meter from the aquarium and the sump, and we obtained the following results: 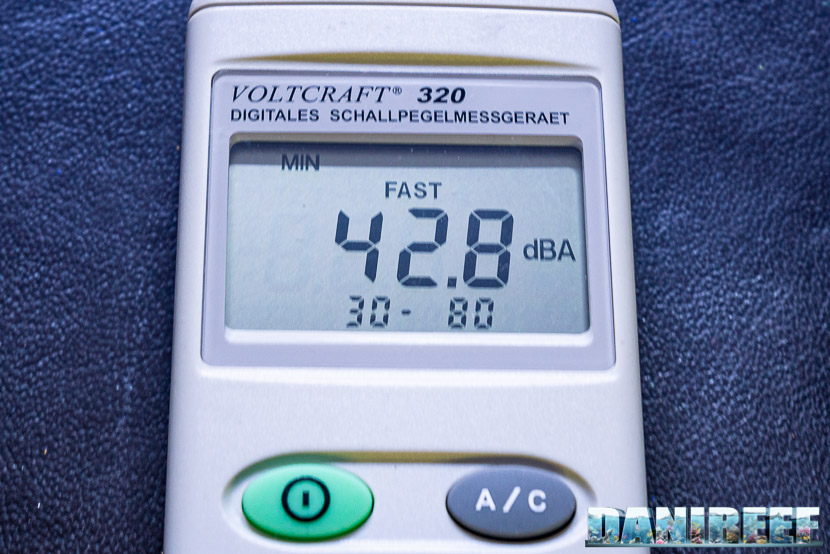 Acoustic pressure at 1 meter with all the utilities of the aquarium turned on and closed doors of cabinet: 42.8 dB 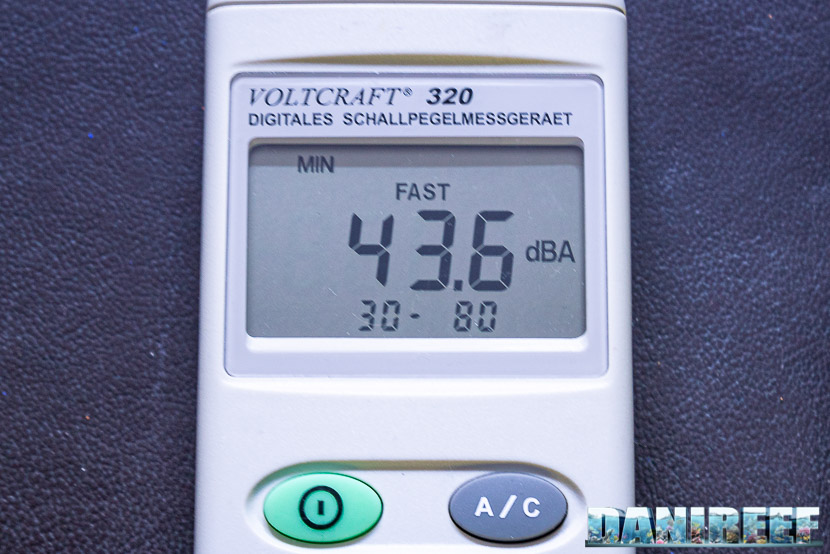 Acoustic pressure at 1 meter with the skimmer turned off and open doors of cabinet 43.6 dB 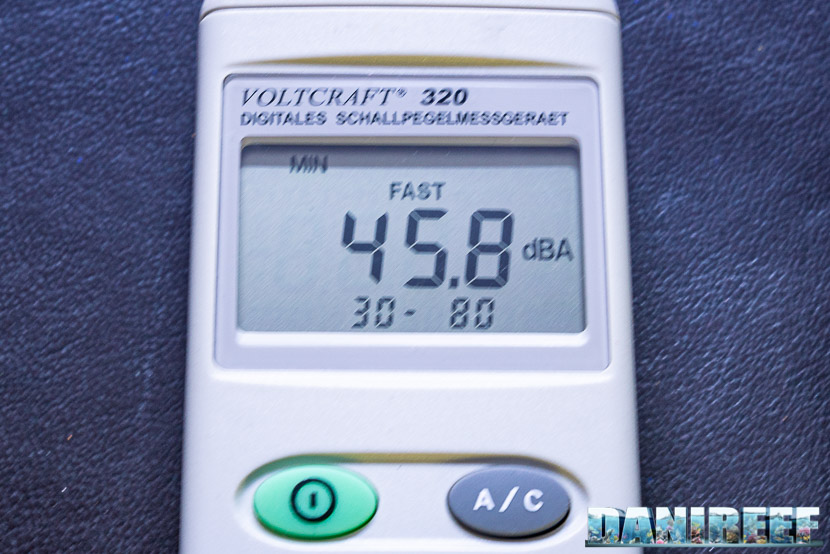 Acoustic pressure at 1 meter after reactivating the skimmer:45.8 dB

The difference in the acoustic pressure measured with the skimmer on and off is of 2.2 dB. So there is a difference, but very small.

The sound level meter is the usual VOLTCRAFT 320, digital meter IEC 651 of Type II, which is very reliable. Given the nature of the noise, all the measurements have been done with the attenuation curve dBA. 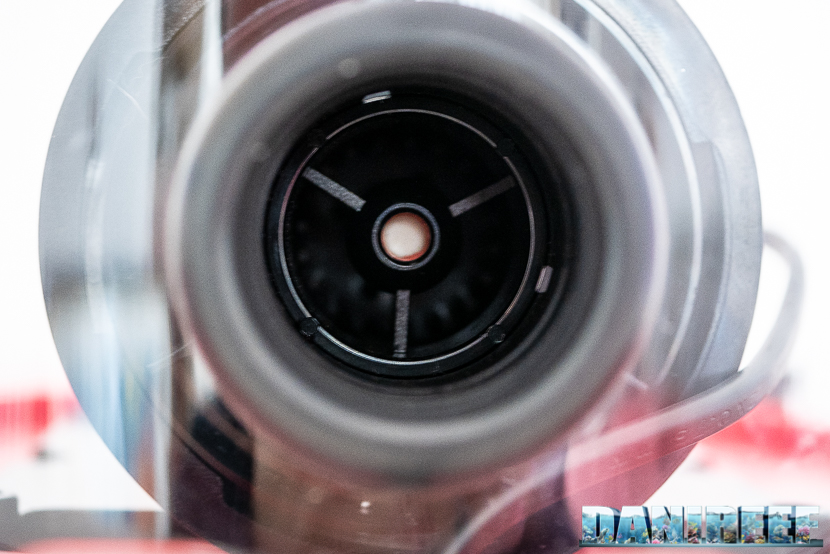 The pump PSK1000 with brush impeller on a monopump skimmer has a declared consumption of about 16 watt, which is 140 kwh every year, and an estimated cost of 38 euro ($42 USD) if the cost per kwh remains stable at 0,27 euro. Red Sea otherwise declares an electric consumption of 25 watt, which is about 59 euro ($65 USD) every year. 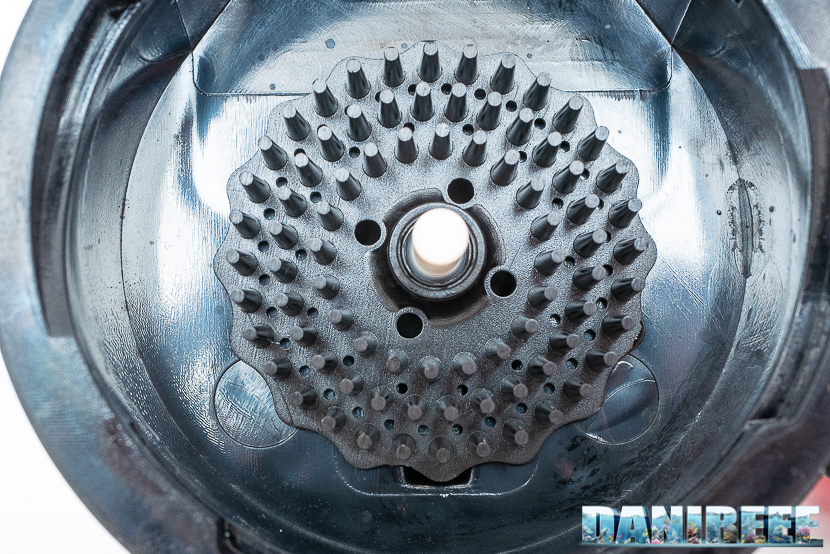 We, as usual, measured the consumption. 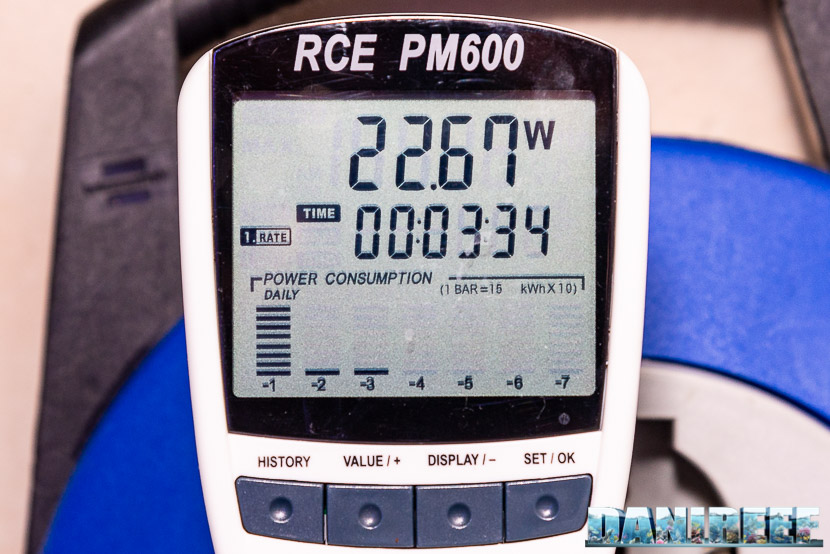 We found an electric consumption lower than declared, about 23 watt. Instead of 59 euro, it would be 54 euro per year. I’d say that in the end the different is insignificant. The maintenance cost would be a fair 6 euro per month ($6.6 USD).

We really loved this skimmer, and in particular we appreciated the absence of any necessary cleaning. It only requires rotating the internal brushes once a day and draining out the glass when it fills up. The values of the aquarium has been perfect for the entire period that we used it. The construction is wonderful, and we believe that the price of 599 euro ($660 USD) for this skimmer perfectly matches its performance. 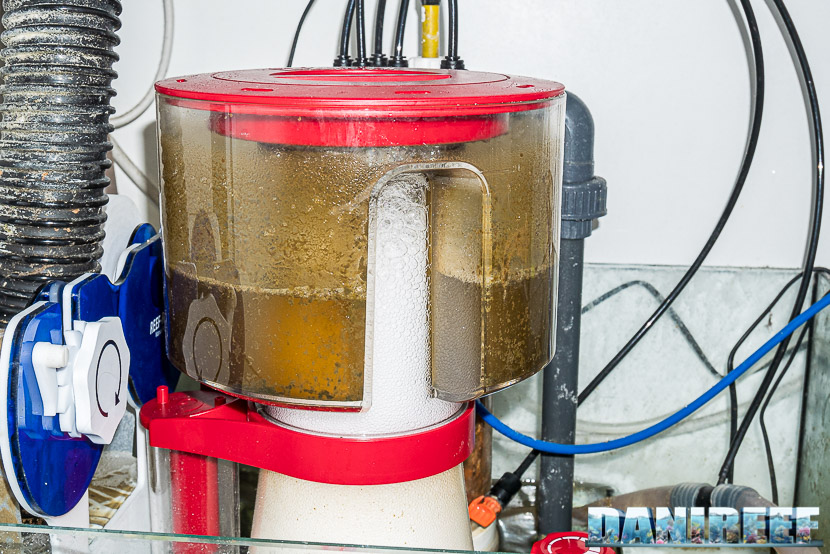 During use it has been extremely regular and efficient, with a value of sucked air that surprised us. The measured value is 40% higher than the declared value: INCREDIBLE!. Easy to open and clean, but it doesn’t need that. And we also appreciated the window that allows us to see the level of water in the glass: it’s so useful that we can’t believe it hasn’t been done before. But Red Sea did. 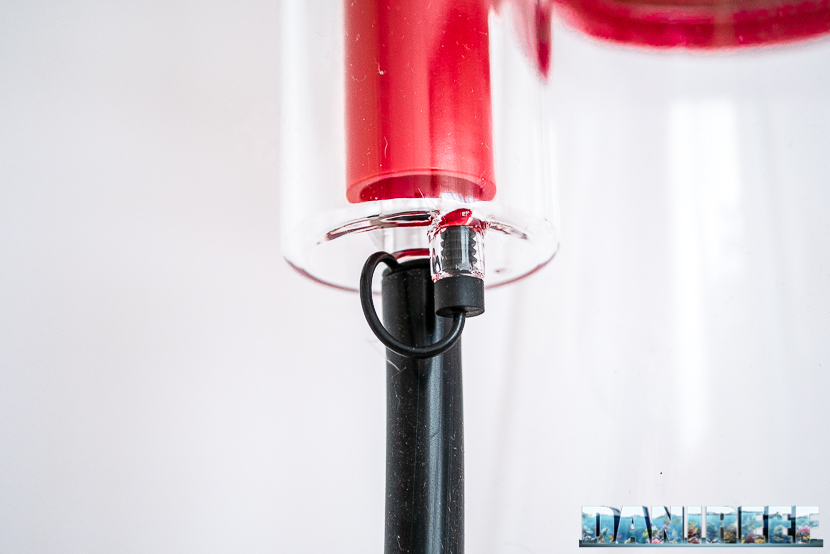 We’d say that it is appropriate for an aquarium with SPS corals and fish up to 500 liters, but if the tank was less populated, with only fish or with soft corals, I think we could try to go over the limit of 800-1000 liters.