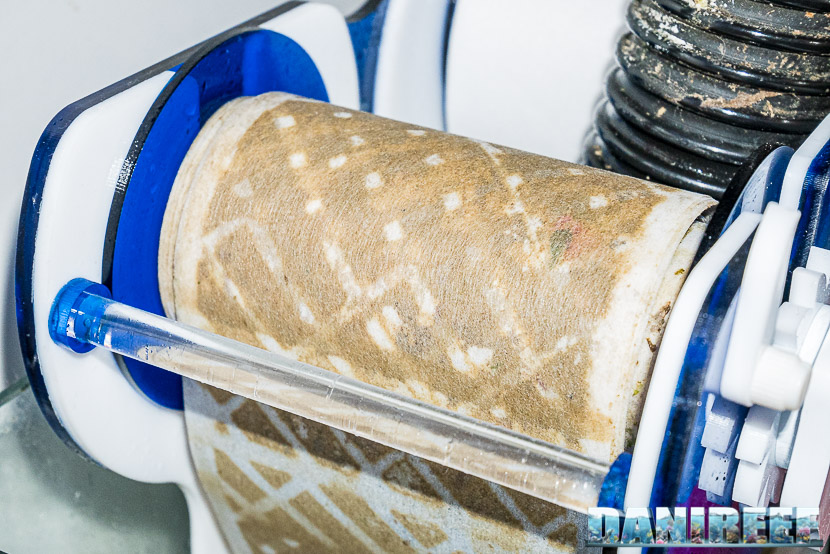 We tested the manual filter Reef Roller by TMC for a long period of time; we waited until we finished the entire roll, and now we’re ready to tell you about our experience, and its pros and cons.

The roller filter is a filter for sediment that has to be placed right below the water fall in the aquarium. So the water coming from the tank has to go through a roll of filter material that blocks impurities and suspended loads.

The filter’s functioning is extremely simple. It promises an egregious cleaning of aquarium water, and the maintenance should be minimal, since a roll is supposed to last for three months before having to be replaced.

Assembling it is extremely easy and fast, unfortunately it’s rather bulky so you have to have the necessary space in sump, since the base, from which the water will fall, has to be above the water line, for obvious reasons. On the front of the device there is a blue line: that’s the level of water to install it. 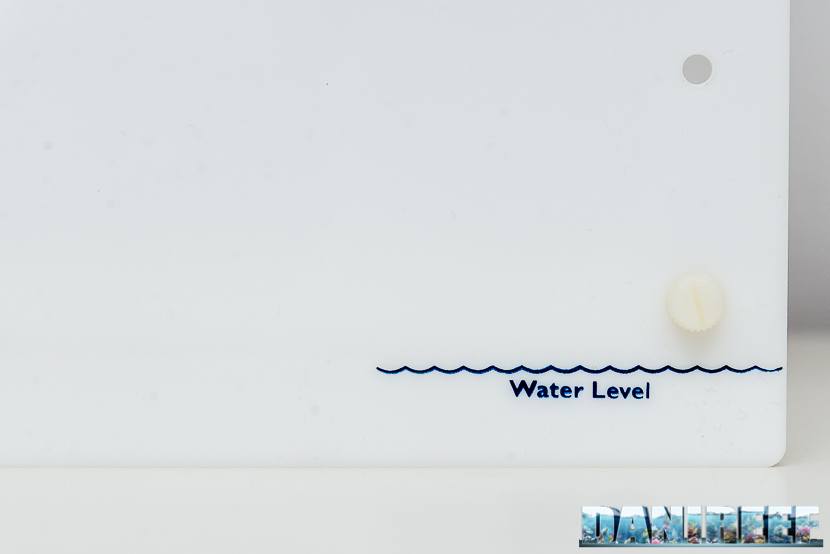 On the rear is the guide. It has to be connected to the sump and allows you to adjust the height of the filter, which will remain suspended. 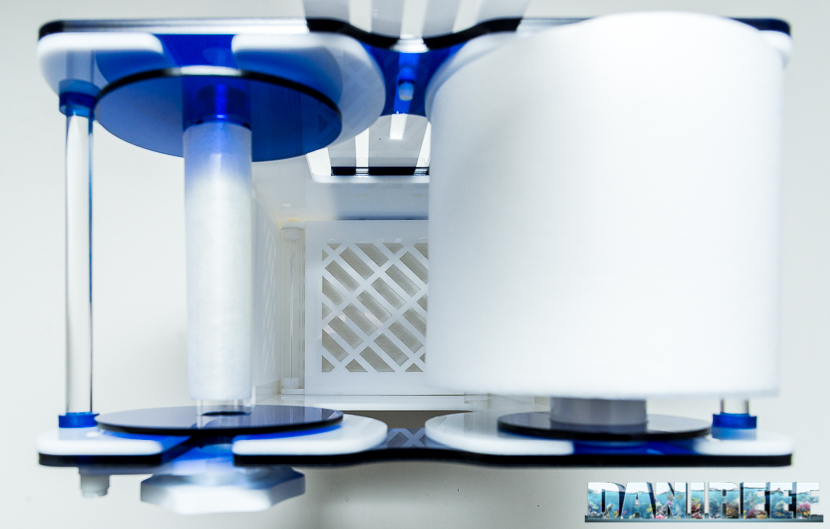 The return pipe has to be inserted between the two rolls as you can see from the picture above. So the water goes through the filter grid and returns to the sump. But, gradually, the filter will clog up and the water will be evacuated through extra holes as in the picture below. 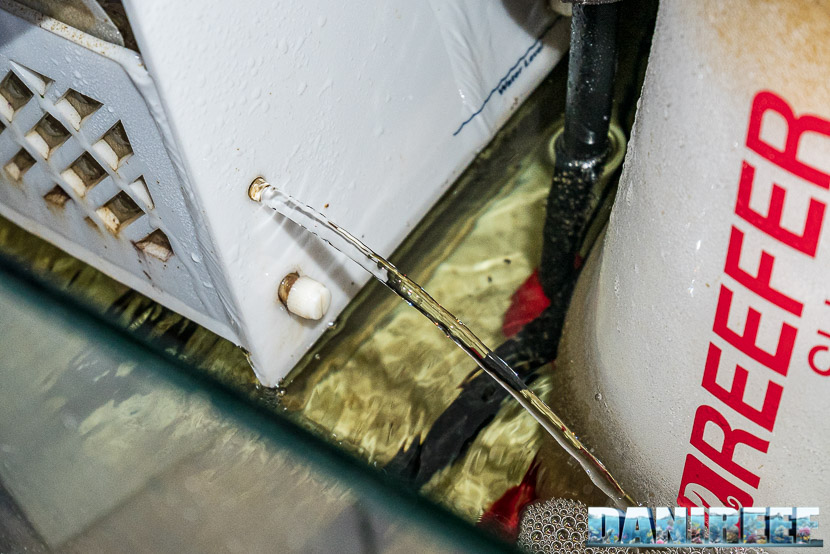 Now you have to turn the superior part of the roll, that collects the dirt, and place the clean part under the grid.

The functioning of the TMC Reef Roller is all here. 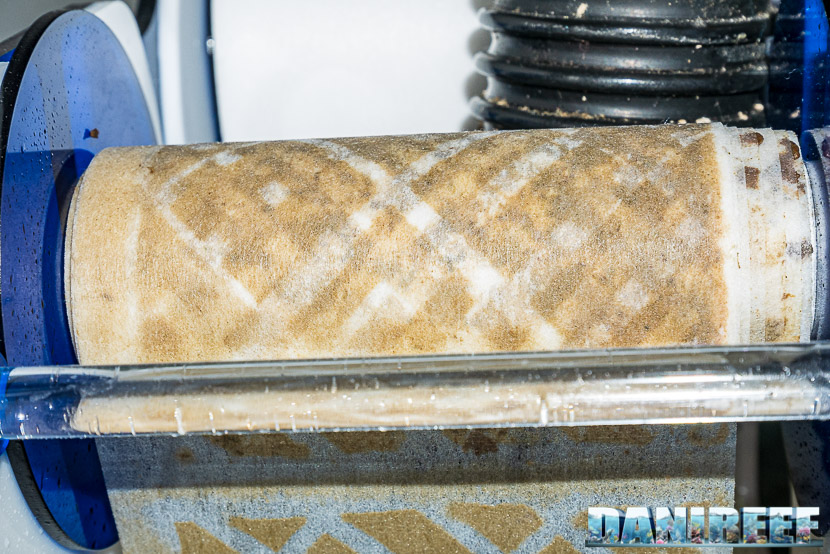 How long does the filter last? For me, it lasted very long. The roll was finished after 6 months of use, much better than the three months declared by TMC. 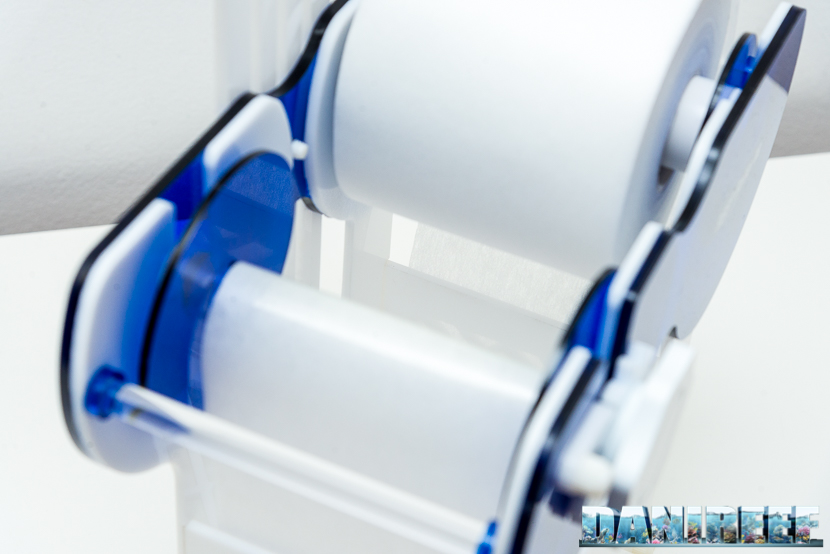 The water is extremely clean, and without the uncomfortable socks that have to be cleaned and replaced in aquarium. From this point of view the result is amazing.

Sure, I missed the automatic version that would have done everything on its own, but given the cost I prefer the manual one. 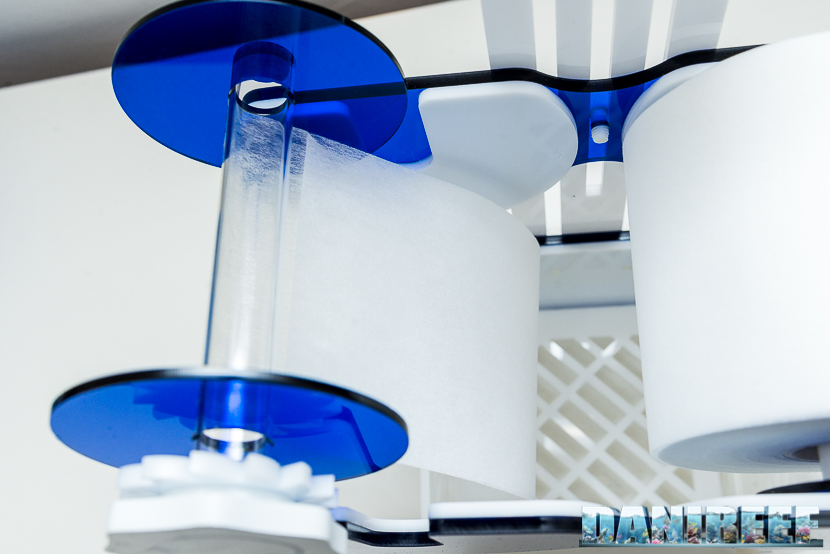 Yes, unfortunately there are. But I think it was because my sample is one of the very first versions, it will probably be improved soon, but I don’t know.

The main defect is that, sooner or later, the grid clogs up, the bigger loads will accumulate, and they will compromise the efficiency of the filter, which has to be cleaned and replaced. Similarly, a problem shows up when a sharp load rips the filter.

The price for the Reef Roller, both manual and automatic

The dimensions of the medium version is 26,5 cm in width and approximately 16 cm in depth. Its height, without the glass connection module, is 29 cm. The base, which is narrower, is about 16×13 cm.

I had been searching for years for something that would allow me to filter the water without having to regularly put my hands in the aquarium, as one has to do with socks. Or that wouldn’t create bacterial flora which increases the nitrates, like perlon wool. The roller filter Reef Roller by TMC is perfect. It’s relatively cheap, a little less then 200 euro, but it solves the problem once and for all, elegantly, practically, and without electricity costs.

I can’t promise that it is the very best roller in circulation, but it works very well. Of course, I missed the automatic version with even less maintenance. 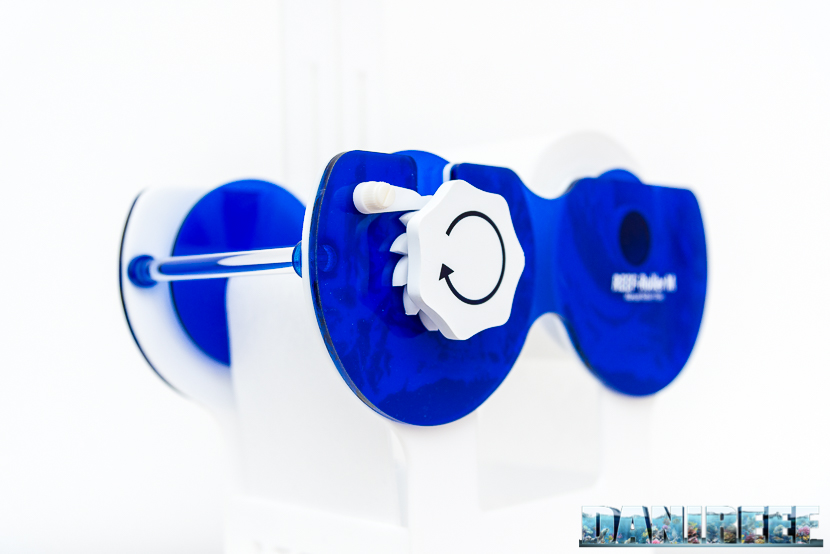 Be careful that the bigger and sharp loads could damage and compromise the filter.

According to us is a very useful and special accessory!

We thank TMC so much that sent us the filter for the review. [Translated by Agnese Poggi]