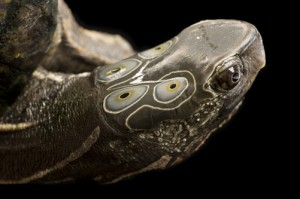 The Tennessee Aquarium has had a breakthrough…two sets of baby four-eyed turtles have successfully hatched.

The name is a bit misleading, they don’t actually have 4 eyes, they have spots on the back of their heads that look like extra eyes.  Listed on CITES Appendix III, these endangered turtles have been declining due to trade and demand for their shells which are used in Traditional Chinese Medicine.

The Aquarium is stepping in to help these little critters out by breeding them to help conserve the species and to place them at other facilities.  This species is notoriously difficult to breed, but careful control of their environmental temperature during winter seems to have done the trick for the Aquarium’s senior herpetologist, Bill Hughes.

Hughes hatched seven four-eyed turtles and three Beal’s four-eyed turtles (also a difficult species to breed).   The advice given to Hughes when he started breeding the four-eyed turtles: “Good luck”.  “Sometimes if it’s a species that no one’s working with, you have no idea what to do,” said Hughes. But that’s at least part of the reason the breeding program exists. “One of our goals is to try to figure out how to breed these species so we can share that information with other interested parties like other zoos,” he said.

Just one of many amazing animal people making a difference!

For more information go to: http://www.timesfreepress.com/