5 Circumstances that Warrant a Species (or Specimen) Tank 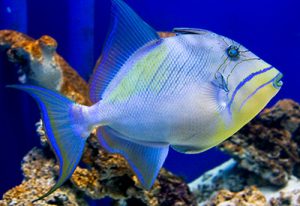 A large, aggressive species, such as a queen triggerfish, is sometimes best kept singly

A diverse community of marine fishes presents quite a visual feast, especially when housed in a reef system brimming with colorful corals. However, in some stocking situations, it’s preferable to avoid the “typical” marine community (if there is such a thing) in favor of a single-species or even a single-specimen tank.

Ah, but if you limit your livestock to a single species or specimen, won’t that make for a real yawner of a tank? On the contrary, sometimes systems that put the focus exclusively or primarily on a particular species or individual are among the most fascinating to observe. Here are five circumstances that warrant going single-species or single-specimen:

1. The shy, specialized feeder Seahorses, which are slow, awkward swimmers, shy by nature, and very specialized, methodical feeders, come to mind here. In your average community aquarium, these fish would basically be doomed, as they’d be unable to compete with bolder, faster-moving tankmates for food and would be unable to tolerate the brisk water movement typical of such systems. Not to mention, a community tank of any appreciable size would make it extremely difficult to provide the steady supply and high concentration of suitable food items necessary to sustain seahorses. On the other hand, in a small dedicated system with very gentle current, no competition for food, and suitable “hitching posts” to cling to, a group of seahorses can make for a truly mesmerizing display MORE