A follow-up on “Have they gone too far…?”

I’ve gotten a lot of feedback from my post entitled, “Have they gone too far.” People were upset, claiming that I was accusing the aquarium industry of harming the environment, and misleading readers into believing that reef aquariums were an environmental stressor. I got feedback claiming that while reef aquariums do use a lot of electricity to maintain, they are far less an environmental stressor than other hobbies. I want to clarify some of the points behind the article.

Accepting responsibility for yourself:

One of the greatest challenges when addressing carbon emissions and climate change is making people aware of how their own habits and behaviors effect the planet. Various aspects of society have been trying to do this for some time, from the please recycle logo on a plastic bottle on up to cars advertising better than mandatory emissions. There are efforts taking place by industry, the government, and non-profit organizations to educate people on incremental changes they can take at home to reduce carbon and waste pollution. Not long ago I bought my daughter a children’s book entitled, “All theWway to the Ocean.” It’s a great story that follows trash thrown onto the sidewalk right out to sea. It’s a service announcement for children that when we are irresponsible with trash, eventually it can end up causing real problems for oceanic animals.

Aquarists assume a great deal of power when they take marine animals into their homes. In many ways as aquarists, we play god. Creating a dynamic ecosystem, measuring and monitoring its chemistry, and trying to balance a host of living things in captivity. Today’s marketplace for marine aquarists offers a great deal of power. The power to go online and order animals that live on the other side of the world, rare animals that are uncommon on their native reefs, and nearly unseen in home aquariums. With all that power comes great responsibility, and it extends beyond just keeping the animals in your care healthy.

In many ways both the hobby and industry have done well. Coral fragging has reduced the burden on wild reefs, and allows aquarists to share coral life with one another without the need to disturb a wild reef. Various equipment manufacturers pay close attention to their products’ power consumption and LED lighting has greatly reduced the electrical burden reef aquariums impose. All of these are important steps in the right direction. It’s vital that the industry sets high standards for itself, so that it can provide aquarists with good options. It’s impossible for an aquarist to set up an inefficient tank, stocked with animals collected under irresponsible circumstances, if those types of items are unavailable for purchase.

The reality is though, that often people push their love of marine aquariums outside of the realm of efficiency. The example I used in my previous post was a massive aquarium that required an entire home to be rebuilt in order to install it. Some of the criticism I got came from statements about how much coal is required to create 1 kilowatt hour of power. People felt this was an unfounded comparison, as it was unknown what type of fuel provides power to this particular aquarium. In my view, the exact fuel that powers this particular aquarium is irrelevant. There are lots of reef aquariums like the one I featured, and some that are much, much larger. Anyone who has watched an episode of “Tanked” on Animal Planet has seen the monstrous aquariums people have installed. In addition to the power consumption of filtration and lighting, some of these home owners opt to install flat screen televisions in their aquariums.

Coal accounts for 38% of all electricity created in the U.S. It’s a common fossil fuel to power electrical generators, and is by far the cheapest and dirtiest fuel source available. Where I live in Maryland coal is by far the primary source of electrical power. Certain states are turning to natural gas, while a select few have wind and solar as alternative options. Even when wind or solar become available, they are often more costly than coal, and thus home owners elect to remain with coal fueled power.

It’s very easy to say that other hobbies or industries pollute the Earth more than marine aquariums, yet it does nothing to address aquariums role in climate change or environmental concerns. It simply passes responsibility away from aquarists and onto another group, a strategy that has worked well for many industries and hobbies for a long time. If we accept personal responsibility for our hobby it’s a far more uncomfortable and inconvenient way of looking at things. It requires first analysis into the effect of what we are doing and careful analysis of how we can do it more efficiently. In the past I’ve suggested simple examples, such as monitoring amperage with a Neptune System’s apex, or putting your pumps back in the water to reduce heating load on the tank’s heater.

My concern with large aquariums that are heavy power consumers, is that efficiency takes a back seat to livestock, tank size and other desires. Today it’s possible to have a personal solar array installed that could power an aquarium. It’s not cheap, and it may require spending less on aquarium set-up, but it isn’t going to release up to 63,000 pounds of CO2 into the environment. It’s also possible to have a personal wind turbine that powers an aquarium, again it’s not cheap, but quite possible.

When I was building my home in 2013 I looked into an array of designs and ideas. I eventually decided that more important than having an abundance of rooms I didn’t use, was that the home was efficient. Maryland has some of the most stringent building codes in the country, and I wanted the house to exceed those. I downsized the house’s footprint and invested in eco-friendly technology, which is more expensive than traditional building. It’s certainly possible to take this approach when setting up an aquarium. I know, I’ve done it. 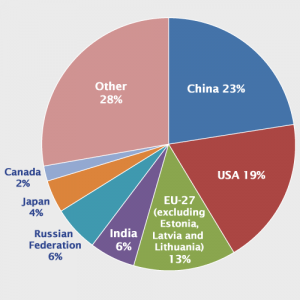 I also got feedback about my prediction that power consumption in private homes could lead to regulation. Several people felt this was an unfounded prediction, that I was simply fear mongering to make people assume reef aquariums were bad news. My prediction was that at some point home energy consumption could be regulated. State governments could formulate an average; how much power homes use, based on family size or square footage. If homes are using beyond that energy percentage, the additional usage may be taxed or fined. If home owner’s elect to reduce their energy consumption, the fine or tax is reduced, or disappears altogether.

This prediction is based on current trends. In Maryland several years ago a rain tax was introduced. Naturally many people within the state were upset about it. The rain tax calculated the amount of water run-off homes created, and taxed them on that amount. Money collected from the tax was to go into a Chesapeake Bay restoration trust. If home owners installed rain collectors, water gardens or any means to reduce home run-off, the tax was reduced or disappeared altogether.

Maryland has also implemented what’s called the empower program. Every Marylander pays a few dollars surcharge on their electric bill. The surcharge pays for programs that aid in reducing energy consumption. Marylanders can contact an energy expert and they will come to your home and offer power saving advice, from installing LED light bulbs down to reducing the temperature of your hot water tank. Also, energy experts can diagnose areas of your home where conditioned air is leaking and work to repair those. Maryland also requires energy providers to release home energy reports on a consistent basis, detailing how much power consumption your home uses compared to other similar homes. With these reports are tips to reduce consumption, and also numbers to call for help in determining what’s using the most power in your home.

Neither is a fine or tax per-say, but it is taking a close look into how much power is consumed by homes in the state, and trying to reduce that amount. I don’t think it’s jumping to unreasonable conclusions that if consumers are still using above the national average of power per month, that fines or additional taxes may be a next step. Considering that legislators were able to pass a rain-tax on runoff pollution, a tax on carbon pollution could be possible, especially if programs like empower aren’t lowering energy consumption. Each year we feel the effects of climate change more and more. Walruses marooned on the Alaskan coast due to vanishing ice, increasingly strong and frequent hurricanes, mudslides that devastate third world countries and declining oceanic health.

Carbon taxes have already been proposed by legislators to replace fuel taxes, and to serve as a tool to make citizens literally feel the effect of carbon output. Some folks felt I should stick to writing science fiction. I wish that the dire situation with climate change was indeed science fiction, but with 95% of international climatologists agreeing this is a human causes phenomena, I think we can all safely conclude it’s science fact. I also wish the threat of carbon taxing was science fiction, but with programs like empower being adopted state wide, and various legislators proposing carbon taxes, if things don’t approve, paying such a fee is simply a matter of time. It’s recorded that residential homes account for 39% of all carbon released in the U.S. Other people claimed I was bringing politics into the discussion of reef aquariums. I wasn’t aware the future of our planet was a political issue. We all play an important role in understanding our effect on the planet and working together to reduce it.

The reality is simple, it’s in our own power to make important changes about how we use energy and where that energy comes from. I for one don’t want coral reefs to exist only behind acrylic or glass.