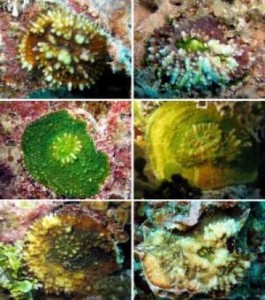 Echinophyllia tara lives in protected reef habitats and was observed in the remote Gambier Islands of French Polynesia between 5 and 20 metres depth.  It’s a zooxanthellate species which commonly grows on dead coral fragments, contributing to the formation of coral reefs in the Gambier.  This species is characterised by large polyps and bright, often mottled, colourations.  It can grow on well-lit surfaces but is also found encrusting shaded underhangs.

E. tara is named after the Tara vessel which allowed the exploration of coral reefs in Gambier. In the Polynesian language, “tara” is the name of a sea goddess as well as referring to a spiny, pointed object – quite fitting for a coral with pointed skeletal structures!

The discovery of this new species in French Polynesia confirms that our knowledge of hard coral diversity is still incomplete and that further exploration can lead to new insights in a remote and previously poorly studied location.