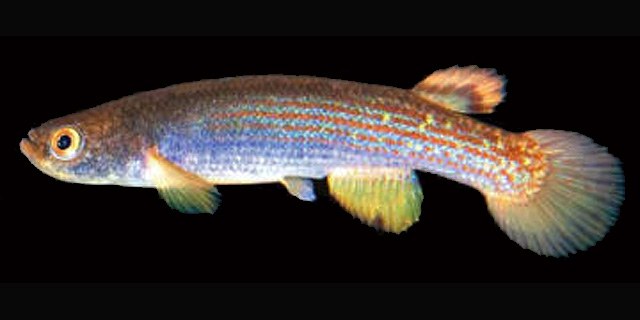 
The new fish is described in Aqua.  The abstract for the formal description reads:

Anablepsoides chapare, new species, is here described from a small stream in the Isiboro River drainage, tributary of Mamoré River, Amazon basin, central Bolivia. It is a member of the A. limoncochae species group and differs from all the other species of this assemblage in its unique colour pattern and morphological differences. Within this assemblage A. chapare seems to be more related to A. christinae and A. luitalimae, both occurring at the Rio Madeira basin, sharing with these species the same caudal-fin shape and a similar color pattern on sides of body, but clearly differing from these species by details of coloration and the number of rays in anal, dorsal and pelvic fins, and also by distinct counts of scales on longitudinal and circumpeduncolar series. Anablepsoides chapare is the only formally described species of the genus occurring in Bolivia apart from A. beniensis, which is also known from the Rio Madeira basin, but clearly differs from this latter species, belonging to a different species group. Rivulus corpulentus Thomerson & Taphorn is herein transferred to the genus Anablepsoides and considered as belonging to the A. limoncochae species group.