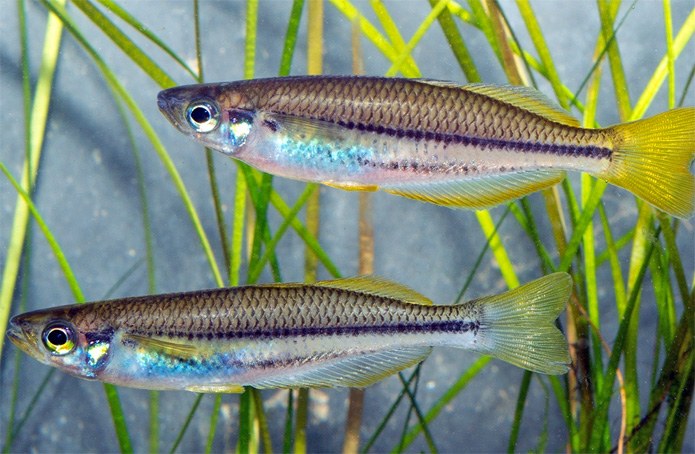 
Cairnsichthys is a genus of rainbowfish that is endemic to a small area within the Wet Tropics bioregion of north-eastern Queensland, Australia. It was previously considered as monotypic and only contained a single species, Cairnsichthys rhombosomoides.  Now a new species from a isolated population within Australia’s Daintree rainforest is described.

While Cairnsichthys sp. are more slender then other rainbowfish genus, the new species, C. bitaeniatus, is primarily differentiated from its congenor C. rhombosomoides, by having an even more slender and narrow profile.  Other differences are “a flatter, straighter predorsal profile and shorter second dorsal fin base; possession of slightly smaller scales, reflected in higher counts of lateral scales and predorsal scales; typically more vertebrae; and colour differences including a more robust, short black stripe across the upper operculum, a pronounced yellow patch on the anteroventral body and usually a more conspicuous second dark stripe on the lower body, with adult males generally having yellowish compared to reddish fins.”

Cairnsichthys bitaeniatus are currently known only from the Cooper Creek and Hutchinson Creek systems of Cape Tribulation in northern Queensland.  Cooper Creek is pictured below.  Like other rainbowfish, C. bitaeniatus is a schooling fish.

The new species is described in ZooTaxa.  The Australian website Rainbowfish has a great write-up about this genus.