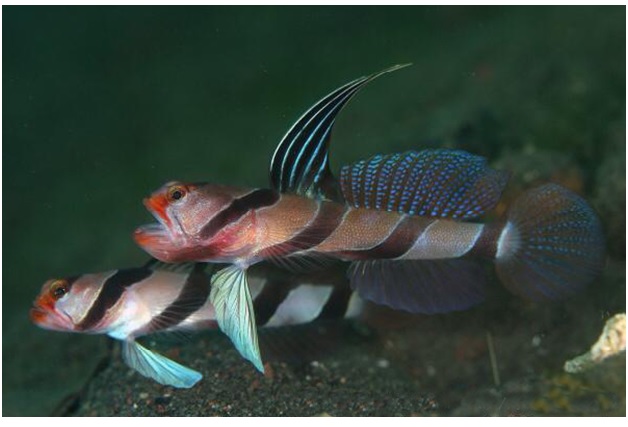 A common goby throughout the Western Pacific, this is one of the most frequently encountered species offered in the aquarium trade. It can be found in water as shallow as three meters, and its range likely includes all of the West Pacific, though it is apparently unknown from Sumatra, Java and much of Borneo. There is a wide gap to the east of its range separating it from its closest relative, the Marquesan endemic S. medon.

Identifying traits to look for are: 1) A short first dorsal fin with a black margin in juveniles. 2) Mature males develop a tall, falcate first dorsal fin, richly infused with melanophores which give it a dusky appearance. 3) Preopercular sensory pores are absent, a trait shared with S. medon, S. nematodes and S. yasha. 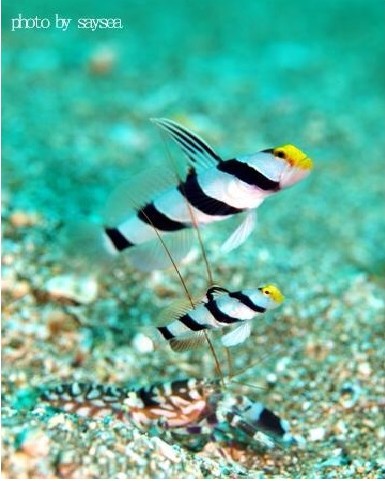 Specimens frequently take on a dark brown base coloration, which seems to correspond with darker substrates (like volcanic sands); the stark white forms are found in coral sand habitats. Judging from diver photographs, this is more of a general tendency than a foolproof observation. 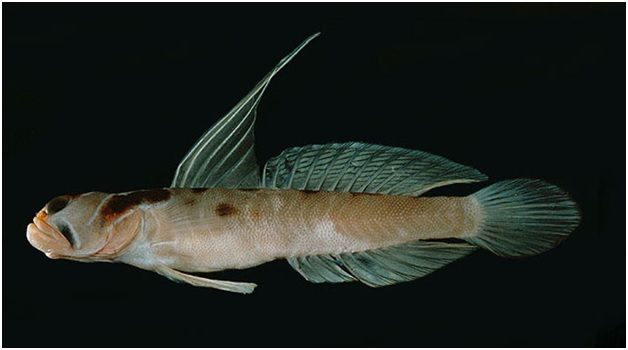 Closely related to the widespread xanthorhinica is a population that is seemingly isolated in the Marquesas Islands. This is an unusual biogeography, as there are no known populations in the nearby islands of Polynesia. Why is this?

It seems unlikely there would be a lack of appropriate habitat; so is it genuinely not present, or has it just not been found? Or is it possible that some time ago an intrepid larval xanthorhinica drifted along with the currents, only to land in the distant Marquesas to form a new population? This too seems unlikely, as gobies have relatively short larval development that would make such long distance travels implausible. Or maybe there were once xanthorhinica in the South Pacific, but these have since been extirpated—another scenario with little to recommend it. Of course, any of these scenarios could conceivably be told in the reverse, with the Marquesan population as a center of origin for the widespread xanthorhinica, but this argued against by the many other Marquesan endemics sister to widespread species. It appears this isolated island group is a hotbed of evolutionary diversification. For now, it is a mystery how this population came to be, and why there are no apparent neighbors living in the rest of Polynesia.

The adults of S. medon have an aberrant pattern of broken bars and blotches scattered in the location where they would be found in related species. The juveniles are essentially identical to those of xanthorhinica, and both develop the same tall, falcate dorsal fin in mature males, which clearly shows the close relationship of these two groups. This species is unknown to aquarists, and likely will remain so, as there is no aquarium collecting from this region. 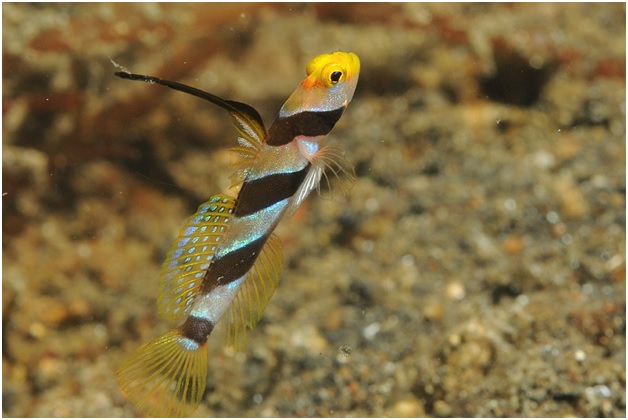 Another common aquarium species is the Threadfin Goby, which is known from depths of 15-25m and ranges from the Andaman Sea of the Eastern Indian Ocean to Southern Japan, as well as throughout Indonesia and West Papua. There is also a disjunct population known in the Seychelles, with no known populations in the intervening areas, such as the Maldives or Sri Lanka. It could conceivably occur in Africa as well, as its preferred habitats are poorly studied on that continent. It is in fact quite plausible that the known Western Indian Ocean population might be distinct enough to warrant its own species, but this is pure speculation without further evidence. 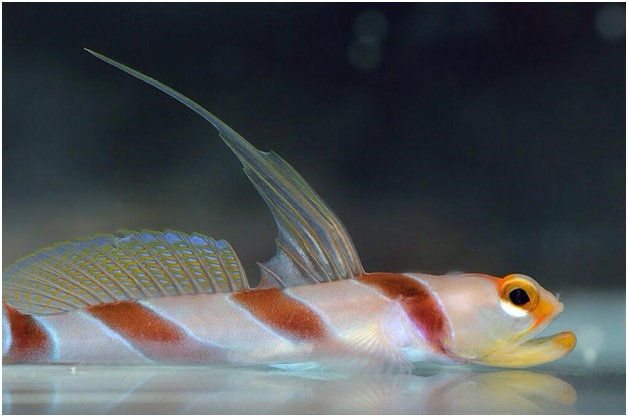 Identifying features are: 1) A long extension of the first two dorsal fin spines, which can reach to nearly the length of the fish’s body. These are black in color, and give rise to another common name, the Black-ray Shrimpgoby. 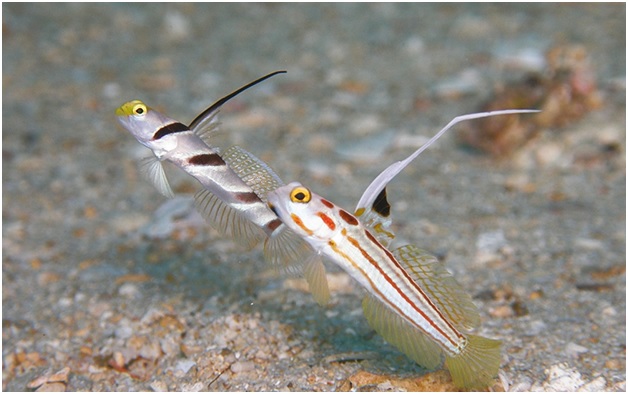 There is some amount of color variety present in this species. Aside from a tendency to develop a darker base coloration associated with dark habitats, occasional specimens will have a mostly clear dorsal fin, which usually corresponds with the specimen having similarly depigmented bars along the body. It appears that the base coloration for these bars is a reddish-brown, as is seen in dracula, and that the common presence of melanophores obscures this in most species. Note that the apparently related S. yasha is also lacking melanophores.