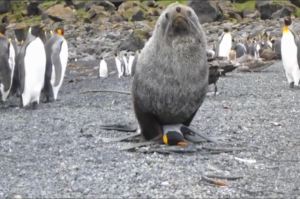 Man, and they all just stand there and watch? It was documented quite some time ago, but deemed too ‘scandalous’ for the times to be revealed by Antarctic scientist George Murray Levick. He was appalled by their debauchery – with one particular incident marring his image of penguins forever during his 1910-1913 expedition. Read more and take in some video, if you dare.

A young male Adélie penguin with a testosterone-fueled agenda was attempting to copulate with a deceased female. Yes, necrophilia, as it turned out, was rampant (they weren’t even picky about how long ago the corpses had actually died, sometimes engaging with year-old cadavers). The penguins were also dirty pedophiles, taking sexual advantage of tiny girl chicks and occasionally killing them afterwards, sometimes before the horrified eyes of the chick’s parents! So basically, Adélie penguins are horrible. This isn’t my first venture discussing blatant sexual abuse in marine creatures, if you’ll recall my tragic tale of my female dwarf cuttlefish who was violently raped together by her mate. This IS, however, the first time I will be getting into interspecies shenanigans taking place.

Well Adélie penguins aren’t the only offenders here, watch in horror the video below of a male Atlantic fur seal having his way with a king penguin. The sex is clearly non-consensual, and traumatically for the penguin, the seal appears to actually penetrate the penguin’s cloaca, or reproductive opening. Even more disturbing, this behavior seems to be increasing, suggesting that this could in fact be a learned behavior on the barren, sub-atlantic island where this was first observed in 2006, Marion Island. The motive behind these acts are still a bit of a puzzle for scientists –  theories of aggression, territorial defense and sexual “practice” seem to be floating around at the moment. If you’d care to learn a bit more, you can explore more of George Murray Levick’s studies here, and also read up on the whole “fur seal VS. king penguin” rape fiasco here. Sorry for anyone I’ve thoroughly disturbed, you should blame those filthy penguins.
https://www.youtube.com/watch?v=H0evs5MRtD8#t=11