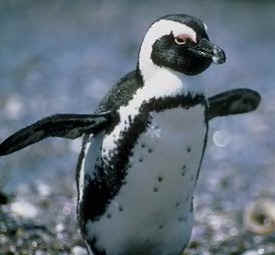 The New England Aquarium is attempting to set the right ‘mood’ for its African Penguins. The Aquarium is trying to play matchmaker to eight pairs of African Penguins so that they will breed more chicks. African Penguins are the only penguin in Africa and currently are endangered due to factors including over fishing, climate change, and pollution. They are sadly expected to be extinct in the World by the year 2025 if we continue along at our current path. However, the New England Aquarium has decided to give the penguins ‘honeymoon suite’ igloos and homes outside of the public eye, to encourage mating. African Penguins are known to be monogamous, staying with only one mate for the majority of their breeding years.  African Penguins nest in burrows and lay two eggs, which both mom and dad incubate the eggs and feed the chicks for two to four months. Let’s hope the Aquarium is able to get these penguins going! MORE