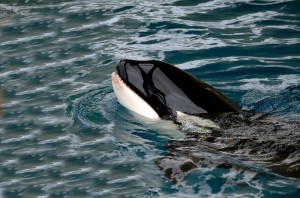 There’s an invasion in the works in the Atlantic Ocean, and these aquatic species don’t come in piece. Receding ice above North America is opening a clear portal larger each year which allows foreign species to pass through into the Atlantic. Everything from whales to microscopic plants and jellyfish are making their way across this new northern passage, and the ecological results are sure to be nothing short of disastrous. Read on after the break.

Few people deny that the northern ice sheet is melting more and more every year, and it’s also well known that it is causing world wide changes in the ocean ecosystems, but another unforeseen effect is starting to become evident. This melting ice not only adds water to the seas but takes ice away. Where there once was an inpassable ice sheet, there is now a passage above North America each year which aquatic species may travel through. A myriad of Pacific species are now infiltrating this new frontier every year with the receding ice, and competition in the Atlantic can only get more intense.

Uncountable species of microscopic life have already made it into the Atlantic including everything from tiny crustaceans and jellyfish to new forms of phytoplankton that will alter the ecosystem from the primary producers up. The invasion doesn’t stop there however. Grey whales have been making the treck for a number of years now, but recently pods of killer whales have also began making the trip. With new predators making it into the food chain even the top of the ecosystem is coming under attack.

Many of these invaders may not be adapt at life in the Atlantic, but there are surely some that will be. This new competition has the potential to change the Atlantic ecosystem forever. Small primary producers change the ecosystem from the bottom with new nutritional effects, and larger predators threaten to wipe out some species of prey animals.

If we didn’t have enough reason to pay attention to our effects upon the Earth, this is another one to add to the list.