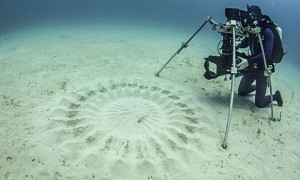 Perhaps, according to Sir David Attenborough, though I’ve seem some pretty sexy anthias  (have you SEEN a Holanthias fuscipinnis?). But we’re not talking aesthetics this time around, we’re going strictly based on their romance game. At first glance, the unassuming porky pufferfish, with his rotund cheeks, toothy grin, and goofy, bulgy eyes wouldn’t strike you as any sort of Rico Suave – in fact you’d probably assume him to be a stuttering, clumsy buffoon in the sack. This is why you shouldn’t make snap judgements! Turns out Mr. Pufferfish has some seriously sultry tricks up his metaphorical sleeve.

Upon viewing footage of the courtship before narration, Attenborough had this to say,

“I promise you I speak the literal truth when I say I was shocked when I saw it,” he says. “Had I not known who filmed it, I would swear it was a fake, done by computer imagery. It’s like an enormously complex flower with symmetrical petals all the way around. It is amazing. You cannot believe it’s true.”

So what makes this little guy worthy of the title “sex god”? Read carefully, gentlemen, it’s his acute attention to detail, particularly when crafting a “boudoir”, attracting the attention from his female counterpart. Meticulously built love nests boast the potential mate’s handyman skills, and we all know just how important that can be. Furthermore, the stunning, flowery circular nests feature petal-like peaks and valleys, and even decorated with delicate shells (it’s the little details, really).

An impressed female swims along, robust with eggs, sizing up the gentleman’s potential. She likes what she sees and gingerly makes her way into the circle. Now this is where things get heated – the male latches on, grabbing her cheek with his teeth, and they swim together side by side, the pair spawn and part ways. That’s right, nothing sexier than being bit in the face. You must admit, it’s quite gallant. The male spends several days being father of the year, fanning and fawning over the fertilized eggs, keeping them oxygenized with his undulating fins until they’ve hatched. Little Rico’s job is done here, he swims off to woo another unsuspecting, but perfectly willing female.

I hope you took notes, you can all learn a thing or two from this little pufferfish (except I don’t recommend bringing hundreds of kin into the world and then bailing to find the next victim of your steamy prowess). I also have to admit I’m slightly envious of nature’s flirtations – even with millions of ‘fish in the sea’, the pufferfish will never have to go to lengths such as dating websites, blind dates, or the awkwardness that is dating in general.