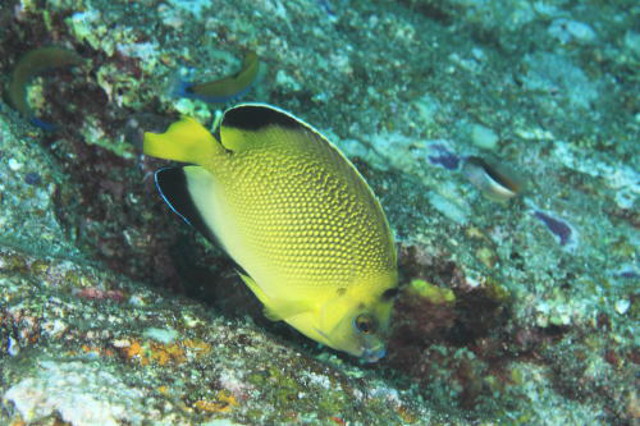 Like most pomacanthids, a fair bit of interspecies intermingling takes place in Apolemichthys, with the Flagfin Angelfish being especially adulterous. Longtime ichthyophiles will be familiar with the famed Armitage Angelfish—a wallet-emptying abomination whose price and rarity far outpaced any aesthetic appeal it might have. Randall noted early on that this was a likely hybrid, and synonymized it as such when it was shown that the number of haemal spines—which are downward projections of the vertebrae nearest the heart—are intermediate in number relative to the presumed parent species. What we see in “armitagei” is a trimaculatus showing a darkening of the dorsal fin and face associated with the presence of xanthurus DNA. Specimens attributable to this hybrid have been found throughout the Indian Ocean: Seychelles, Maldives, Thailand, and Java.

The Goldflake Angelfish has been alleged to hybridize with trimaculatus, attributed to juveniles showing unusual dorsal fin patterning. Since these specimens are likely sourced from Kiritimati—a region far removed from the nearest Flagfin population—these are clearly just representative of the normal variation present in the species. However, captive breeding by Weng PIng-Su of Bali Aquarich has resulted in some legitimate hybrids. To date, the only photos are of 60-day old specimens, which look identical to juvenile trimaculatus, and we eagerly await updates as they mature.  Seeing as any good hybrid must have a ridiculous portmanteau as its sobriquet, might I suggest the Flagflake Angelfish? Mellifluously alliterative, no? 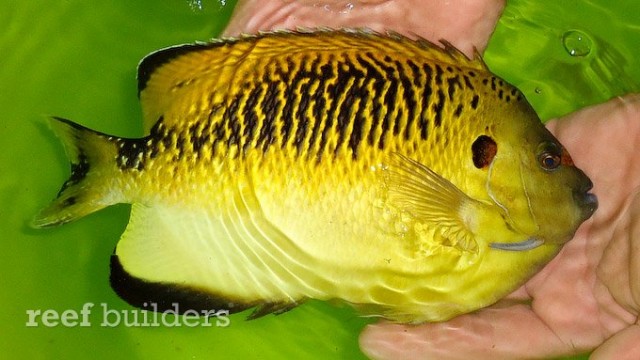 South Africa has its own interesting hybrid in the form of kingi X trimaculatus. The fish looks just as one might expect, having a yellow body, a black tip to the anal fin, a chaotic mix of yellow and black on the caudal fin, and the kingi stripes and facial darkening. What’s particularly curious about this mixing is the wide overlap these two taxa have in South Africa. While kingi is a rare denison of the depths here, trimaculatus is apparently somewhat common in shallower waters. This raises questions regarding their evolutionary origins. Did kingi evolve in isolation here, only to have trimaculatus expand its range. Or might the two have evolved alongside (i.e. sympatrically) each other, perhaps with kingi’s deep reef habitat preference helping to drive speciation. Or perhaps the striking differences in coloration worked to encourage sexual selection through assortative mating. So many possibilities… so little research. 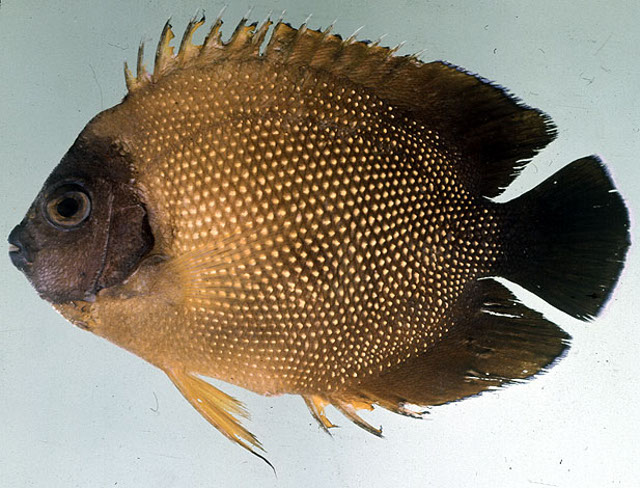 A type specimen of A. guezei. The bluish face is poorly-shown here. Credit: John Randall

And, lastly, we come to one of the great enduring mysteries in all of coral reef ichthyology: Apolemichthys guezei. What is this enigmatic fish? Why has it only been found at Réunion Island? Why has it not been seen in decades? The original type specimens were collected in the 1970’s using gillnets placed at 60-80 meters. Jack Randall, reef fish taxonomist par excellance, spent six weeks diving these reefs down to this depth only to come up empty-handed. Where, pray tell, is this absentee angelfish? 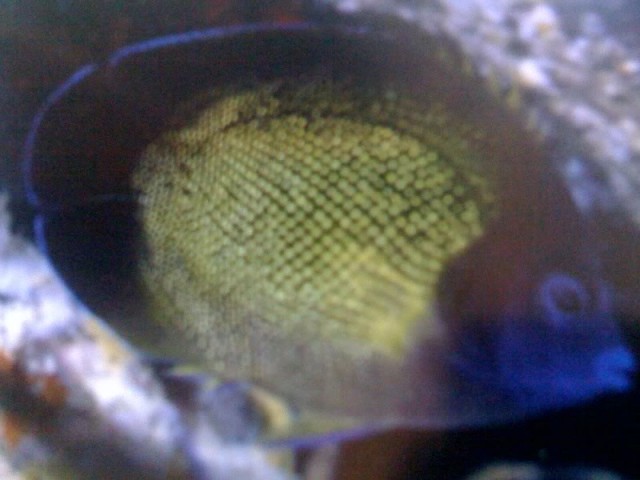 The only live photograph. Credit: unknown

The biogeography of guezei is potentially important to unraveling its riddle, as trimaculatus and xanthurus are both likely to be resident in its range. And, so, whither the guezei? There is no biogeographical void to be filled by this fish, which would suggest that it is either a distinct lineage… or a hybrid.

Both theories have their flaws. As a distinct clade, we would have to presume guezei is a specialist of some unusually deep reefs, as none have been found above 60 meters, despite ample surveys. There might be a parallel here with kingi—another deeper-water reef fish with a sympatric relative present—but kingi has at least been found with some regularity, even as a juvenile in tidepools. Chalking the rarity of guezei sightings up to its presence beyond SCUBA depth seems to be a tenuous argument at best.

As a hybrid, what parentage would explain its unusual coloration: black fins, a brown body with contrasting yellow scales, and a blue-grey face? The only other species known from the region are presumed to hybridize and create the “Armitage Angelfish”. There are some vague similarities with this fish to guezei, and, given the variability present in trimaculatus, perhaps a darker hybrid could explain what we are seeing in guezei. But the black tail is a strong argument against it. Can two species with yellow caudal fins hybridize to create black-tailed offspring? Maybe the genetic material to make this happen is present in trimaculatus, as its two closest relatives are indeed melanistic posteriorly… but it seems unlikely. 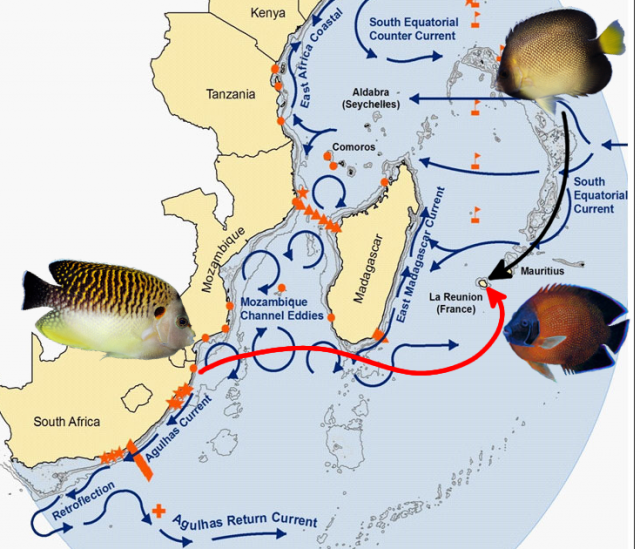 Which raises the question of whether the poorly-known kingi might perhaps waif itself over to the deep reefs of the Mascarenes. The map above gives an idea of the currents in the region, with rather chaotic gyres that could potentially take the pelagic larva of kingi eastward to the southern reefs of Madagascar. This is a region with little, if any, exploration (particularly at the kind of depths favored by kingi), and so it is not so implausible that some South African endemics may yet show themselves to be more widespread in these subtropical waters. Currents circulate further east from here, eventually heading north to form a large loop. Is this a legitimate mechanism to bring the occasional kingi to Réunion Island to hybridize with xanthurus?

It’s difficult to predict what such a mix would look like, but the black fins of guezei can be found in the caudal of kingi and the anal of xanthurus, while the dark head could be homologous to that of the latter. Are the Goldflake-like qualities of guezei an atavistic anomaly of a kingi hybrid, seeing as these two taxa are such close relations? Ultimately, what is the most likely explanation for this phantom of a fish? Are we simply inept at finding it in its natural habitat, or does it only ever exist as a rare hybrid? Recall the expanding range of xanthotis into Kenya, and consider whether a similar change in oceanic currents might have helped to transport and isolate kingi to Réunion Island. Evolution is not immune to such chance events.