Seahorses have captured the attention of people for centuries; there are pictures of seahorses dating back to the 1500’s. Seahorses are beautiful creatures that seem to have been pulled straight from a fairytale. There are approximately 36 sp. of seahorses all belonging to the Sygnathid family (Genus Hippocampus). Pipe fishes and seadragons are also included in the Sygnathid family but will not be covered in this article.

Seahorses have very distinct characteristics. First and foremost, unlike most fishes they swim upright using only their dorsal and opercular (modified pectoral) fins for propulsion. They do not have a caudal fin, in its place they have a long muscular prehensile tail. They also lack any scales; instead their bone structure is modified into a series of plates that act as bony armor. Another very obvious trait of the seahorse is it’s horse-like head (giving it the name seahorse) with a bent neck and a long snout. This adaptation allows the seahorse to probe into nooks and crannies for prey, that they then suck up with a “snick” o 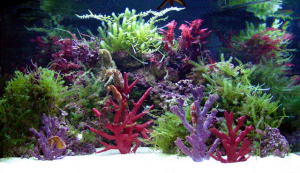 f the snout that causes a vacuum like suction2. Their prey items, mostly small crustaceans such as mysis shrimp, amphipods, isopods, and copepods are readily abundant in almost any shallow habitat.

Seahorses choose habitats that are generally shallow (moving to deeper waters in the winter) and somewhat protected from currents. In every ocean there is at least one species of seahorse, if not many. Their habitats include rocky coral reefs and sandy grass beds. Seahorses can also be found floating among clumps of sargassum or other free floating macroalgae.

Though seahorses inhabit a diverse array of habitats, in the home aquarium they need the same basic care and water quality as other fishes. The main difference with seahorses is their sensitivity to changes in water quality, temperature (most like a typical 76 to 78 degree range, though some species are temperate), and even light. When setting up a seahorse tank there are several factors that must be considered. First and foremost is the filter, there should be no air bubbles and a low flow rate (this does not necessarily mean low gph). Seahorses like a fairly turbulence free tank, and air bubbles can lead to the dreaded Gas Bubble Disease (to be discussed later in the article). The next most important thing is to get a tank that is tall, seahorses are known for their intricate courtship rituals that take up a lot of vertical space. Substrate can vary by what decor you are looking for. Just remember that whatever substrate you chose, it should not have too many sharp edges for the
seahorse to get cuts from. I prefer to use a small crushed coral or sand substrate. The last consideration in decor is hitching posts; rocks, plants, and corals (faux and real) should be chosen by their ability to be used as a hitching spot. Depending on species of seahorse, the size and maximum diameter of the hitching posts will vary. 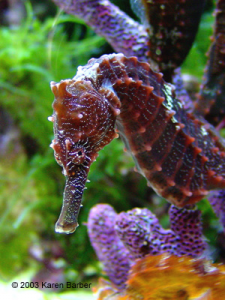 There are very few tank mates that are suitable for a seahorse tank. In fact, most seahorse tanks are kept as Genius or Family only tanks. Most corals are not good for a seahorse tank due to the seahorse being scale-less and therefore prone to injury buy the stinging cells of the polyps. There are some gorgonians as well as soft corals that are seahorse safe. Most fish are not “seahorse safe.” Seahorses are very slow and thoughtful eaters, taking a long time to pick out that one perfect morsel before snicking it up. Also, seahorses themselves would make a good meal for many common fishes (anglers, rockfish, and Tetraodontids). And the last group of animals that should be avoided are crustaceans, not only for the seahorses safety but for the safety of the crustacean as well. Seahorses are quite fierce predators and some of the larger species can snick apart cleaner shrimp and even smaller hermit crabs! Of course there are some species of crustaceans that pose a threat to seahorses
themselves (larger crabs, and some of the more ferocious shrimps).

Instead of discussing further what cannot go into a tank to make a seahorse friendly environment, lets move on to what can be put in the tank. Of course, just about anyone would want a clean up crew, since seahorses can be quite messy eaters. Just about any gastropod (snails and limpets especially) can be put into a seahorse tank. I will suggest that you get several Nassarius snails if you are not going to have a feeding tray (also to be discussed later). There are some nudibranchs and mini-stars that could do well in a seahorse only tank. As far as fish companions go, just about any goby or blenny will be docile enough to live with a seahorse. Also, some clownfish and tangs have been known to do well in a seahorse tank, as long as they are well fed and a more docile specimen of the species. Of course, most sygnathids of similar size can be housed together. However, there is one exception to the rule. The Giant Pacific Seahorse ( H. ingens ) does not do well with other
seahorses (or a tank that formerly housed other seahorses). This is the only species of seahorse found in the east Pacific, which makes H. ingens very susceptible to disease that other seahorses may carry.

Since disease has just been mentioned, I will move onto that aspect of seahorse keeping next. Seahorses are no more vulnerable to the “normal” fish diseases, given that they have proper water quality and nutrition. I have only seen one mild case of white spot, and that may have been a secondary infection to mycobacterium. Mycobacterium is a very common seahorse disease, and it is unfortunately fatal in most cases. Common signs of myco are: lethargy, loss of appetite, an abdomen that is very pinched or swollen, and eventually muted color/loss of vibrance. Kanamyacin and Maracyn have been known to prevent/reduce chance of myco infection, especially when given orally. However, neither drug has been proven to cure an infection that has gotten to a detectable stage. Vibrio, much like myco, is difficult to detect at an early stage and is often fatal. Signs of vibrio include lethargy, loss of appetite, and white or red spots on the skin indicating an open necrotic wound. Often when tail
rot or snout rot is seen it is vibrio. If the lesions are caught early enough they can be treated with a multiple antibiotic that can be bought at your LFS (paragon II is a good one).

The final disease that plagues seahorses is Gas Bubble Disease (GBD). There are three main types of GBD, internal GBD (IGBD), external GBD (EGBD) and pouch emphysema. All GBD is caused either by gas supersaturation in the water column, or an internal bacterial infection. EGBD symptoms include gas bubbles forming under the skin. While IGBD symptoms include body bloat causing buoyancy problems. Pouch emphysema is only found in male seahorses, and is noticeable by the inflamed, reddened pouch (looks different from a pregnant seahorse). Treatment typically consists of 3 things: making sure there are no air bubbles getting into the system, treating with an antibiotic, and if available (only by prescription) treating with diamox. The actual bubbles under the skin may be popped, and with pouch emphysema the pouch should be evacuated.

Nutrition is a touchy subject in and of itself, because there are many different theories on how a seahorse should be fed. It is my opinion that, if at all possible, the seahorses should be trained onto frozen, enriched foods as soon as possible. Live foods should therefore, only be used as an enrichment item, to “give the seahorses something to do.” The live foods should always be gut loaded with something high in vitamins and minerals (such as cyclopeze or spirulina powder). Frozen food should always be enriched with a vitamin supplement as well as something such as selcon that is high in fatty acids. Most frozen foods have a breakdown in amino acids making this addition a necessity. If frozen foods are not an option (you have a finicky eater), try to get live foods that are in the Penaeus (juvinile), Lysmata (juvinile) or mysid family, as they are more nutritionally sufficient.

If the seahorse will take frozen food, a feeding tray can be used, mainly to cut down on the amount of organic waste in the tank. A feeding tray can come in many sizes and forms, but overall is a small dish with a tube attached to lower the food into the dish. The seahorses will eventually learn to come to the dish to get their meal. Seahorses need to be fed at least one time a day, if not two. Seahorses have no stomach, only an intestinal tract. This causes the seahorse to eat on a more frequent basis since they are not absorbing as much of the nutrient at each feed. 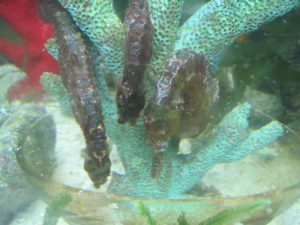 There is not enough space or time to go over all the different and varied aspects of seahorse keeping in one short article. If anything, please remember to always have: a medical tank set up, a large supply of food, and to quarantine any animals that will be added in with your “ponies.” Seahorses take a lot of time, patience, and effort, a small sacrifice to have these beautiful and charming creatures in your home. Each individual has a personality, and the variance in attitude during feeding, courting, and just greeting is an amusement all its own.

Though there are several books on the market for seahorses, a good one to start with is…Seahorses, Pipefish, and their relatives. By Rudie H. Kuiter. It is a good basic knowledge book and covers most known species.