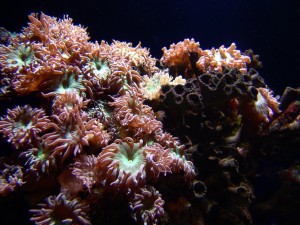 Health is defined as the condition of an organism with respect to the performance of its vital functions.

Nutrition is the act or process of nourishing or being nourished; specifically, the sum of the processes by which an animal or plant takes in and utilizes food substances.

So what is healthy nutrition in the reef aquarium? It is a question that evokes strong emotions and, frequently, heated debate.

You, the hobbyist, are “Mother Nature” to your aquarium system. Your decisions directly affect its success or failure, and what successful aquarists have learned is that consistency of care is crucial. The goal of this article is to provide you with clear information so that you can make the best choices for maintaining a healthy and successful ecosystem. Nutrition is essential for all members of the animal kingdom survive, thrive, and reproduce. Our goal must be not only a healthy, but a vibrant, stable, and thriving ecosystem 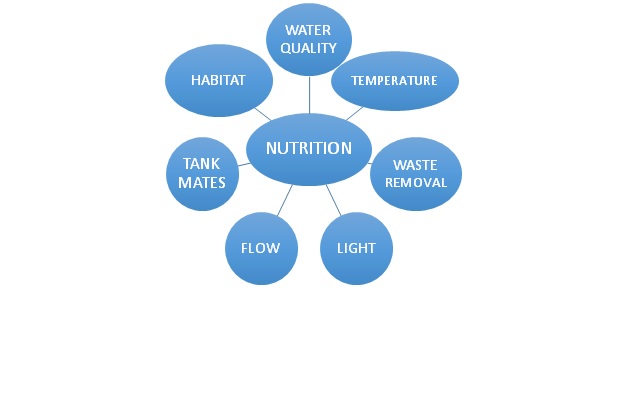 Pictured above is a nutritional-centrist view of the pillars of reefkeeping success. Each factor has a “give and take” relationship with nutrition. Flow, for instance, is particularly critical for sessile organisms as it brings both nutrients to the organism and allows for the removal of waste and detritus. It also delivers scents that alert the animals to initiate hunting, which is often the first step in the process of acquiring nutrients. For lighting, the creation of both dawn and dusk is a trigger that supports healthy feeding cycles for many animals. Temperature and water quality can be stressors, and both greatly affect the animals’ ability to acquire nutrients and dispose of waste. Social stress is less understood, but we do know that both habitat and tank mates contribute to total overall stress. Finally, natural waste removal requires a healthy detritus pyramid to process and break down waste for safe natural removal.

This article is based on the concept of biomimicry; Mother Nature has perfected her diet over thousands of years and it works. Following in her footsteps is the path to success. The science is becoming clearer, for both humans and for the systems we keep: food choices matter.

One last comment about the use of the term “organic” in labeling. The word “organic” is now a legal term defined by agencies of the federal government. To date, there are no published regulations in the fish/fish food industry, and as such the use of the term guarantees no added value. Be mindful of labels, as it is another form of advertising.  For instance, is a “live product” 100% live, 50% live or just greater than 1% to make that claim? Look for “born on dates” or “expiration dates” when you select a product. You can extend the shelf life of some live products through refrigeration, but even with taking that measure, at abou t 30 days the food’s nutrients will have degraded to the point of being ineffective.

Malnutrition, the other side of the coin from healthy nutrition, is mainly a human condition. If you add up those suffering from under-nutrition (Marasmus and Kwashiorkor) and morbid obesity (also a form of malnutrition), that total, by many estimates, exceeds 50% of the worldwide human population.There are a dizzying number of diets and experts that seem to change recommendations constantly. Who are we to believe? Who are we to follow? I recommend “Mother Nature”.

But that is chronic malnutrition. In our hobby, acute malnutrition is a far greater concern. Acute malnutrition is harder to identify and can be much harder to treat. Most animals die with a malady but of starvation/malnutrition. Acute starvation/malnutrition is also very different metabolically from chronic starvation/malnutrition; stress is a major factor that is frequently misunderstood or missed. Stress is biphasic (both an acute and chronic form that are metabolically different) and catabolic (burning stored energy). Hormones like catecholamines, which are the “flight or fight” hormones, mediate acute stress. These hormones direct cells to catabolize both sugars and protein to provide an instant boost in energy levels. They are depleted quickly.  Chronic stress is mediated by glucocorticoids or steroids, which are also catabolic but utilize the energy from fat metabolism, and as such produce starvation ketosis.

The effects of over-feeding or “tank obesity” also have a profound effect on your ecosystems. Do you suction clean your sand? What do you think you are removing? It is a combination of detritus and the microorganisms that consume them. Detritus is a combination of indigestible foods and uneaten foods from over-feeding, and the ratio of those two is important. Indigestible foods can be natural, as in the chitinous exoskeletons of arthropods. Inefficient digestion of foods, which is related to food quality, and unnatural food additives such as grains and grain byproducts, make up the majority of the detritus. They are inefficiently and incompletely digested by marine organisms, who don’t possess the digestive pathways for these nutrients, and waste valuable time and surface area for digestion and increase loss of digestible nutrients. The effects of overfeeding are seen in uncontrolled algae growth including hair algae, bacterial blooms, fluctuations in water quality and spikes in ammonium and phosphates, a reduction in oxygen levels, and the proliferation of pests like aptasia and vermatid snails, none of which are considered healthy for your tank.

Dietary energy is also critical to understanding healthy nutrition. The processing of nutrients is, at best, imperfect. Depending on the quality of the food, as much as 20% passes undigested through the organism and is eliminated as part of the detritus. For poorer quality foods, that number can approach 40%. When you add the energy cost of acquiring foods, which varies up to 10%-20%, food processing can become very inefficient and requires much more food to meet daily basal metabolic needs. The processes of capture, ingesting, digesting, absorbing, packing, and transporting all consume energy. Food recognition is also important to healthy nutrition; that recognition also requires energy and can be visual, electromagnetic, and frequently, olfactory, recognizing nutrients like amino acids, sugars, simple fatty acids, and even bile salts released by food sources whether they are alive or dead.  Food recognition is only the beginning of the nutrient processing.

It is also important to understand the feeding styles so that you can meet their needs to feed safely and effectively.  The old concept of herbivore/omnivore/carnivore needs to be refined as part of our discussion. We need to add benthic (feeding from rocks and substrate) and pelagic (feeding from the water column) and define individuals with multiple terms based on food consumption. We need to account for their feeding styles when make food choices. Tangs, for instance, are best characterized as benthic herbivorous omnivores, not only needing but actually preferring macro algae for health. You can provide that opportunity in your tank.  Pelagic feeders need pelagic food sources.  Both live and not-live foods are available. Many predators are both carnivores and scavengers, depending on the circumstances.

Let’s trace a fish from capture to your tank.  From the local fisherman to a Trans shipper to the wholesaler to your local pet store or online retailer to your tank. Stressful? You bet. Are those fish fed in transit? Never. Protein in food is converted to toxic ammonia and only accumulates in the transport media. When the ammonia level in the transport media exceeds the gill tissue level, ammonia is transported back into the fish causing ultimately death. Let’s estimate that the entire process results in at least 7 days of acute starvation and stress. It is therefore critical to restart the metabolic machinery as quickly as possible. Do appetite stimulates like garlic really work? I have never seen garlic grown in the ocean; if it works, it is not natural. Heated debate here, but I would rather stimulate with all-natural, easily recognizable foods such fish roe or live foods. In each egg’s yolk sac are vitamins, minerals, proteins, sugars, and fats.  Why would spawns be in the millions with only a few surviving? The majority are consumed as very healthy food.