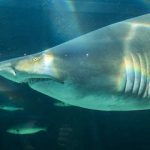 The respected Two Oceans Aquarium recently released a total of four ragged-tooth sharks back into the ocean in preparation of embarking on new renovations this month. The Aquarium will be closing down the “I&J Predator Exhibit” for major renovations and opening an exciting new exhibit later this month. Speaking from first hand experience, moving a large shark is no easy task.
Using wooden sticks to guide the sharks, aquarium divers led the sharks into a large PVC wooden cone. The sharks were then moved into a holding tank, that allowed the sharks to be transferred into the filtered 6000 liter tank with life support systems, on the back of a truck, and taken to the ocean. Although two of the sharks have been living in captivity at the Aquarium since 2005, the aquarium staff are confident that the sharks will easily adjust to being back in the ocean. “We do feed them but – like all predators – they’ll eat when they’re hungry… Just because we were feeding them, it doesn’t mean they’ll lose the instinct to hunt,” the aquarium’s Renee Leeuwner explains. Unlike other animals, historically sharks released into the ocean have done well in their new surroundings and resume their normal migratory routes and feeding patterns. The sharks will be able to obtain valuable information about their travels. MORE