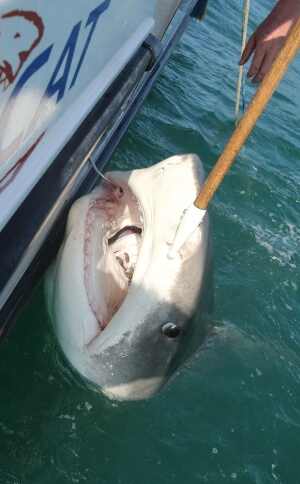 A tiger shark caught off the coast of Queensland, in eastern Australia, in a practice that is now to be applied to the seas surrounding Western Australia as well.
Glenn Barnes/Newspix/REX FEATURES

The government of the region said earlier this week that it would start deploying ‘drum lines’ just 1 kilometer offshore of popular beaches in January. Drum Lines Consist of a baited hook fixed to the ocean floor and designed to attract sharks. These lines will be monitored daily. In addition, ‘management zones’ will be set up around some beaches, and any large shark venturing into these zones will be killed.Professional shark hunters will be paid to patrol WA waters, with a licence to kill any shark bigger than three meters spotted in designated zones spanning large parts of the metropolitan and south-west coastline. The government insists this a targeted public safety policy.

Scientists however, warn that “the targeted culling of a threatened species, like the white shark, is especially environmentally irresponsible”. Removing already threatened species will have severe consequences on the environment. The three species of shark are responsible for most attacks on humans are already threatened: the great white shark (Carcharodon carcharias), which is rated as a species vulnerable to extinction by the International Union for Conservation of Nature, the tiger shark (Galeocerdo cuvier), which is rated as near-threatened, and the bull shark (Carcharhinus leucas), which is also rated as near-threatened. Researchers have advised “potential implications for the populations of any currently threatened marine species” and could also pose a risk to dolphins.  “Due to the environmental impacts of shark control activities, it is not recommended that either shark nets [or] drum-lines be introduced into Western Australia.”

“We need to consider that we’re visitors to that marine environment,” says George Burgess, a noted shark researcher at the Florida Museum of Natural History in Gainesville.. “The question it comes down to is more of a moral choice: are we willing to alter the natural system to the point of breakage, at least in terms of particular species, for the safety of a human who is invading that foreign world?” MORE