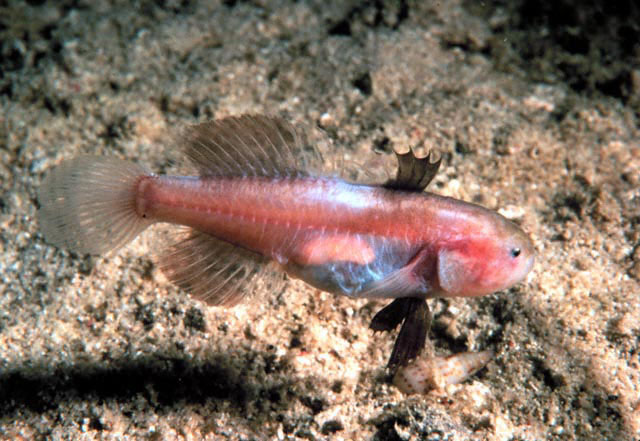 Of the roughly 1,100 species in the Family Gobiidae, there may be none stranger than Austrolethops wardi, a bizarrely shaped fish with even more-bizarre habits. Pale, wrinkled, and nearly blind, this curious fish lives a reclusive life in tropical marine waters, feeding on a highly unusual diet of seagrass—like a piscine panda of the goby world. With it’s many idiosyncratic traits, this anomalous fish has thwarted our efforts at understanding it and remains, to this day, an evolutionary mystery within the goby lineage. 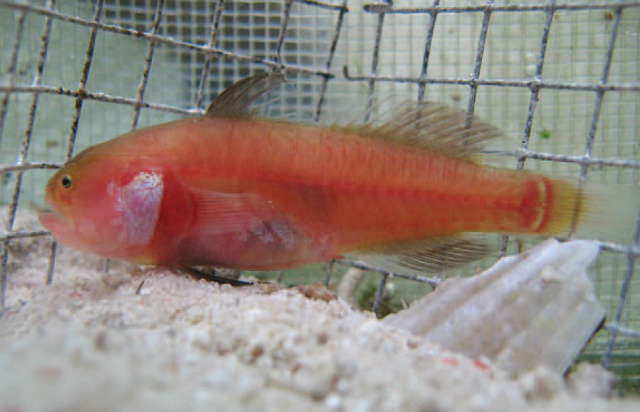 The first specimen of A. wardi was dredged from a muddy habitat in Queensland, Australia and taxonomically described in 1935, named after its initial discoverer, a Mr. Melbourne Ward. Since then it has been discovered in Kenya, Mozambique and Aldabra, Indonesia, the Philippines, as well as Guam, Taiwan and Japan. These scattered locales hint at the difficulty of finding this species in its natural habitat, as it presumably occurs throughout much of the Indo-Pacific. 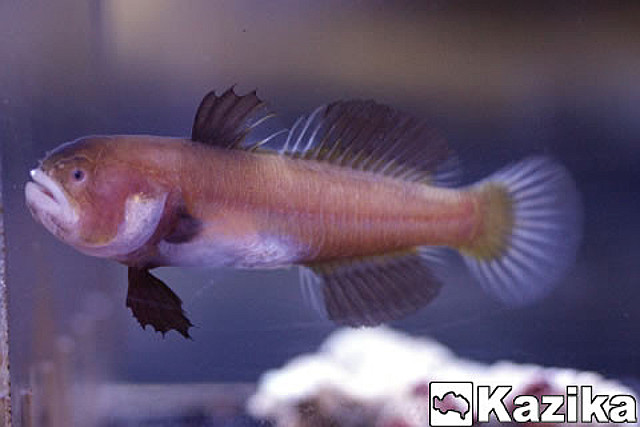 The pale lips of this aquarium specimen are unusual. Credit: Kazika

Part of the challenge in finding Austrolethops is the uncertainty regarding where and when to look. Various sources describe it as occurring in coral rubble, leaving its hidden abode only at night. However, there are multiple reports of this species having been found in exclusive association within the burrows of the ghost shrimp Neaxius acanthus (seen in the video below). This lobster-like crustacean is found in shallow seagrass beds, where it makes a living collecting detached pieces of vegetation to fill its burrow. This larder serves as both a food source and as construction material for the subterranean homestead.

Ghost shrimp are apparently quite industrious, collecting far more seagrass than is seemingly necessary. Researchers have shown that up to half of the plant production in this habitat is broken down in the burrows of Neaxius, much of this through bacterial decomposition. With such a steady supply of excess food, it’s no great surprise that a fish would have discovered a way to take advantage of this, though it is somewhat surprising that it would be a goby (a group comprised mostly of carnivores). Dietary studies of Austrolethops have found approximately 95% of its gut contents filled with seagrass fragments, with the other 5% mostly being algal material.

In the animal kingdom, a diet heavy in vegetation is typically associated with a long gut to enable the kind of bacterial fermentation necessary for releasing nutrients. In the case of A. wardi, however, there is no obvious morphological specialization, as its gut is short and wide. How, then, is a goby (ultimately derived from what we can presume was a carnivorous ancestor) able to process the nutrients from an essentially vegetarian diet? This is a question for which we currently have no answer.

The morphological features of this fish are just as peculiar as its unorthodox diet. With pale, pink skin and reduced eyes, Austrolethops has earned its nickname as the “Nudey Goby” and appears specialized for a cryptic existence in the same manner as that seen in fishes restricted to cave environments. Normally such cavernicolous creatures show an increase in sensory organs to compensate for a lack of sight, but A. wardi bucks this trend somewhat with the reduced sensory canals on its head. These structures are prevalent in most gobies, often prominently so, but here we instead find sensory papillae that extend onto a shallow groove running lengthwise along the body in the same position where we would expect to find a more traditional lateral line.

True gobies—those classified in the Family Gobiidae—typically have fused pelvic fins, a highly characteristic trait for the group. There are, of course, exceptions to this, which we can see in the separate fins of Austrolethops. This raises the obvious question of whether this strange goby-like fish is actually a goby, but this has been confirmed to an extent by certain nuances of its vertebral and dorsal fin counts, which both strongly intimate it being a highly modified gobioid. What is sorely needed to finally figure out this fish’s evolutionary relationships is some genetic inquiry, natch.

Given the obscure nature of the Nudey Goby, it comes as a bit of a surprise that it has, on rare occasion, made its way into the aquarium industry. Given its specialized diet and reclusive habits, it’s questionable how appropriate Austrolethops is as a captive subject. Replicating its diet with a high quality vegetable pellet might be possible, but this would likely require target feeding into whatever crevice it resides in. Ghost shrimps also sporadically show up in aquarium exports, making it potentially possible to pair the two in a seagrass biotope. 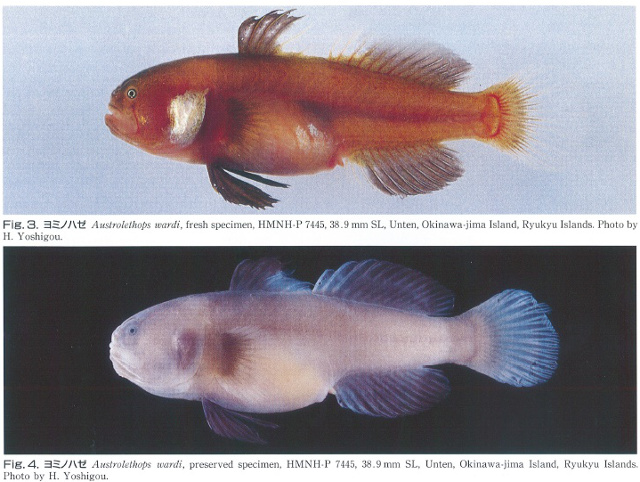 I think a strong case could be made for this pallid and pudgy goby being the ugliest fish associated with coral reefs… is there anything less colorful and charismatic than Austrolethops? Still, I find this fish to be endlessly fascinating for its unconventional tendencies and evolutionary mystery. We undoubtedly have a great deal left to learn, and aquarists have a unique opportunity to advance our understanding by documenting any specimens that enter the aquarium trade.