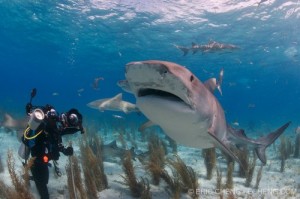 Doctor John Petty, 63 years old, was one of eight individuals who went to Tiger Beach for Shark Diving last Sunday. Tiger Beach in the Bahamas is one of the first destinations that offered cageless shark diving. Tiger Beach is a world known diving destination that attracts tons of visitors yearly. The water is baited with chum before the divers submerge, often times without a cage. Petty was part of a multi-day exursion lead by Jim Abernethy Scuba Adventures (JASA). Abernethy is a rather controversal figure in the Shark Diving Industry. Abernethy has come under scrutiny in the dive industry for promoting dangerous dives and pushing the limits on cageless shark dives.  While there are thousands of dives which occur without incident, JASA had a fatal shark incident in 2008 and he himself has been attacked on the dive. When Petty did not come out of the water with the other divers last Sunday, the dive boat called the Coast Guard and the search for Petty began. The U.S. Coast Guard has ended the search. Dive gear believed to be belonging to Petty was found, but no body was discovered. The authorities determined that a shark attack was the cause of death. Petty’s family held a memorial service yesterday, where hundreds of people attended. This tragic incident serves as a reminder of the risk that comes along with shark diving. MORE