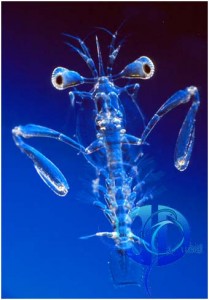 Oh, how clever. Utilizing reflectors that emit an opalescent bluish-green sheen, the juvenile mantis shrimp is able to camouflage itself from predators. While adult mantis shrimp are pretty badass sucker-punchers and capable of holding their own, the vulnerable little babes need some other tactics to keep themselves protected. A study of the whole process was published earlier by The Journal of Experimental Biology. Described to look not unlike “floating, clear pterodactyls”, the larval shrimp are known for their opalescent blue or green, shiny spherical eyes. Kathryn Feller, a a doctoral student at the University of Maryland, Baltimore County studying animal vision (how specific) observed captive and free-living mantis shrimp near Australia’s Lizard Island where she “was able to measure the contrast between the reflected light coming from the animals’ eyes and the background light underwater.”. The camouflage is remarkably fail-proof in the three species she observed regardless of the depth, time, angle they’re viewed at or the angle the sun hits the water. Researchers are still curious as to exactly how the shrimp are creating the reflection. Feller suspects the optical layer that’s responsible for the illusion may be made up of precisely structured crystal spheres that lay over the top of the pigments that isolate the receptors within their eyes. “[They’re] arranged in such a way that they scatter light of a particular wavelength,” Feller explains. “These kinds of mirrored or reflective crystals aren’t unheard of in the animal world, Feller says. Beetles and weevils have them.”. Since the arrangement of the shrimp’s eyes are so bizarre, researchers are left stumped as to what’s actually going on. 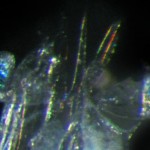 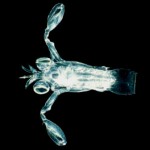