If you breed cichlids (and have amazing eyesight), take a close look at the mouths of fries. You’ll see them opening and closing at extreme speeds – up to 200+ times per minute.  The babies look like they’re gasping for air (and they very well could be), but a new study has discovered that this rapid jaw movement, otherwise known as gaping, has a much more life-altering grand purpose: gaping actually shapes the formation of bones and ultimately how the fish’s mouth and head develop into adulthood.

And we’re not talking about a subtle effect.  By manipulating the speed at which the baby fish gaped, scientists were able to to influence skull and jaw developmental variability by about 15 percent.  To put that number in context, when scientists manipulate a fish’s genes, they are only able to influence developmental variability by 20 percent.  In other words, tweaking a developing fish’s behavior has almost as much impact as tweaking their DNA.

From the University of Massachusetts at Amherst:

An unspoken frustration for evolutionary biologists over the past 100 years, says Craig Albertson at the University of Massachusetts Amherst, is that genetics can only account for a small percentage of variation in the physical traits of organisms. Now he reports experimental results on how another factor, a “bizarre behavior” that is part of early cichlid fish larvae’s developmental environment, influences later variation in their craniofacial bones.

Albertson has studied African cichlid fish for 20 years as a model system for exploring how biodiversity originates and is maintained, with a focus on genetic contributions to species differences. In a new series of experiments with former Ph.D. student Yinan Hu, now a postdoctoral fellow at Boston College, they examined a “vigorous gaping” behavior in larval fish that starts immediately after the cartilaginous lower jaw forms and before bone deposition begins. Results appear in the current early online issue of Proceedings of the Royal Society B.

As Albertson explains, “We predicted that the baby fish are exercising their jaw muscles, which should impose forces on the bones they attach to, forces that might stimulate bone formation.” Albertson and Hu observed that gaping frequency, which could reach as high as 200 per minute, varied by species “in a way that foreshadows differences in bone deposition around processes critical for the action of jaw opening.”

Albertson, an evolutionary geneticist, says, “For over a hundred years, we’ve been taught that the ability of a system to evolve depends largely on the amount of genetic variation that exists for a trait. What is ignored, or not noted for most traits, is that less than 50 percent of genetic variation can typically be accounted for by genetics.” He adds, “Variation in skull shape is highly heritable, so why can we only find genetic variability that accounts for such a small amount of variability in bone development? In my lab we have shifted from elaborating our genetic models to looking more closely at the interaction between genetics and the environment.”

How the environment influences development is known as epigenetics in its original and broadest meaning, Albertson points out. Coined in the 1940s to mean anything not encoded in the nucleotide sequence, it has narrowed to refer to how the 3D structure of the DNA molecule is modified, he notes. “That meaning is true, but it isn’t the only one. We’re returning to the original definition.”

In this sense, gaping is part of “a very dynamic developmental environment,” Albertson notes. “Bones are not forming in static lumps of tissue. Rather, they are developing as part of, and perhaps in response to, a highly complex and dynamic system.” The fact that species differ in gaping rate led the researchers to test the idea that differences in bone development could be accounted for by variation in this behavior. “We performed experiments to see if we could slow the rate in fast-gaping species and speed it up in slow-gaping species, and to see if this behavioral manipulation could influence bone development in predictable ways.”

Not only did these experiments work, but the magnitude of difference in skeletal morphology induced by these simple shifts in behavior was similar to those predicted to be caused by genetic factors. Albertson says, “What I find really exciting is that in 15 years of manipulating the genetics of craniofacial bone development we can account for up to 20 percent of the variability, so it’s modest. When we manipulate gaping behavior, we can influence developmental variability by about 15 percent, which is comparable, almost equal to the genetic response.”

The geneticist adds, “When I give talks, this is what surprises colleagues the most, that the environmental effect is on par with the genetic effect, and that it is not systemic but highly specific to important bones involved in fish feeding.”

Alberston says this behavior makes sense because “Nature is all about efficiency. Fine-tuning an adaptive response to a particular niche increases the chances of survival. Sometimes longer bones are better, and one way to get there is to kick-start the bone developmental program. This gaping behavior precedes bone formation, so it may represent a way to increase efficiency by setting an animal on the trajectory toward an adaptive phenotype earlier.”

He adds, “This is just the beginning. Our field has been entrenched in a gene-centered view of evolution for nearly a century. My hope is that this study adds to a growing body of literature that shows there are other important sources of variation. I hope we can expand the paradigm to consider the environmental context where development takes place, because the effects are likely greater and more widespread than we’d predict.”

The next step for his lab will be to figure out how environmental stimuli influence development, Albertson explains. “We now need to understand how bone cells sense and respond to their mechanical environment. What are the molecules that enable this mechano-sensing?”

To this end, the researchers demonstrated that mechanical-load-induced shifts in skeletal development are associated with differences in expression of the ptch1 gene, implicated previously in mediating between-species skeletal shap differences. “That the same molecule is involved in mechano-sensing within species and genetic divergence between species is very cool as it’s consistent with evolutionary theory,” Albertson says.

The idea is that when an animal population is exposed to a new environment, certain molecules will enable them to respond by conforming their bodies to meet new challenges. If the new environment is stable, natural selection should favor genetic mutations in these molecules that fix the original, transient response. This theory establishes a framework for the initial steps in species divergence. “We think that we now have a molecular foothold into this process,” Albertson explains. “These are exciting times.” 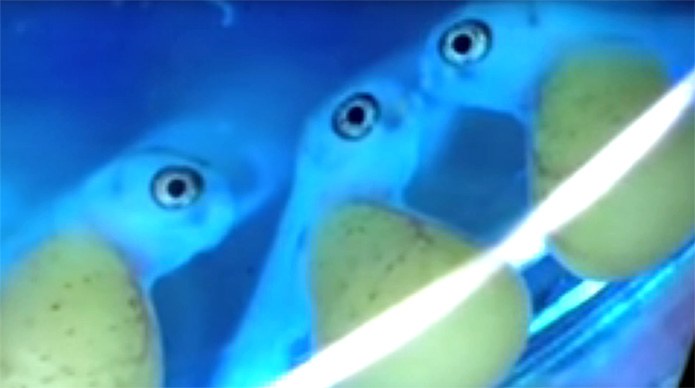