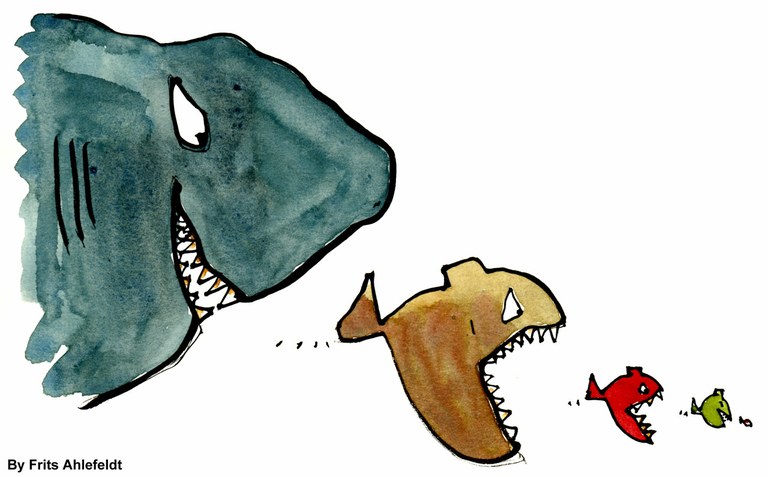 Scientists have discovered that the presence of large fish predators can reduce stress on baby fish.

Researchers from the ARC Centre of Excellence for Coral Reef Studies at James Cook University and the University of Glasgow have found that physiological stress on baby fish can be reduced by more than a third if large predatory fish are around to scare off smaller, medium-sized predators, known as mesopredators.

“Previous studies have proven that the sight of large predators can reduce the activity of mesopredators,” explains JCU’s Maria del Mar Palacios, lead author of the research. “But our study is the first to show that such behavioural control on mesopredators is strong enough to indirectly allow baby fish to reduce stress levels by more than 35 %.”

To obtain these results, scientists exposed baby damselfish to combinations of sensory cues (including visual and scent cues) from small and large predators.

Detailed measures of the behaviour and oxygen uptake (as proxy for “stress”) of the baby fish enabled researchers to understand the cascading effects that predators throughout the food chain can have on newly settled baby fish on the Great Barrier Reef.

As with humans, it’s expected that a reduction in physiological stress should benefit their fitness and well-being.

“Animals have finite energy budgets, so by reducing the energy invested in anti-predator responses, baby fish should be able to invest more energy in growth and storage,” said Dr. Shaun Killen, a fish physiologist from the University of Glasgow who also collaborated on the study.

Professor Mark McCormick, who supervised the research, warned that although these findings are exciting from an ecological point of view, they could carry grave consequences for the balance of marine ecosystems.

“The ongoing overexploitation of large marine carnivores might allow an explosion of smaller, active predators that could not only kill, but also stress the population of baby fish that remain,” he said.