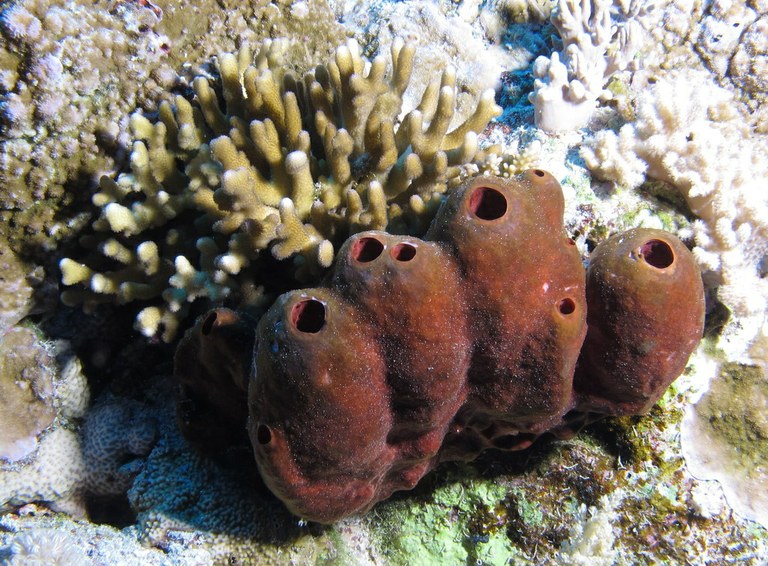 A sponge side by side with corals in the Red Sea. Photo by Derek Keats.


From the University of Maryland Center for Environmental Science

Did you ever wonder why the water is so clear around coral reefs? Scientists have known for years that sponges can filter water and gather nutrients from the ocean, making it appear crystal clear. For the first time scientists at the University of Maryland Center for Environmental Science (UMCES) have identified that bacteria on sponges are harvesting phosphorus from the water for the reef ecosystem to use for nourishment. The findings were published in the February 23 issue of Proceedings of the National Academy of Sciences.

“Coral reefs are under huge threat around the world, so we need to understand reef systems very well,” said study co-author Russell Hill, UMCES professor and director of the Institute of Marine and Environmental Technology in Baltimore. “We have known for more than 100 years that water surrounding reefs is low in nitrogen and phosphorus. Charles Darwin even pointed out this paradox. This is an important step forward in understanding how you can have such incredible biodiversity even though the surrounding water is low in phosphorus.”

Marine sponges live on the bottom of the ocean and are an important component of a reef ecosystem. They are filter feeders and draw nutrients from the water column, processing thousands of gallons of seawater every day. This study opens up a new window on the role that sponges play in pulling nutrients out of the water and redistributing them to the reef, a basic and critical role for the ecosystem’s survival.

Sponges harbor many bacteria and microbes that rely on the sponge for survival, and vice versa. In fact, these microorganisms can account for up to 40% of the sponge’s volume. The bacteria that live in sponges may help transfer nutrients from the water to the sponge, and scientists have identified the mechanism for holding on to phosphorus for the first time.

“The sponge is an old animal and bacteria are even older, so they’ve been living together for a really long time,” said the study’s lead author Fan Zhang. “This mechanism has been going on for many millions of years, and we’re just now beginning to understand how they take phosphorus out of the water.”

Phosphorus is a nutrient essential for life, but it is at very low concentrations in the water around coral reefs. The new study reports that phosphorus is being captured by bacteria that live in the sponges and turned into polyphosphate, a form of phosphorus readily usable by the reef community. Polyphosphate is found in almost all organisms and functions as a way to store phosphorus and provide an energy reserve. The polyphosphate shows up on electron microscopy as tiny white clusters, or granules.

For years marine biologists had seen these granules on specimen samples of sponges, but never stopped to figure out what they were.  For the first time, researchers provide evidence that these granules come from bacteria that live in the sponges that have stored phosphorus in the  form of polyphosphate, providing a reservoir that the sponge and other reef organisms can use.

This finding is an important first step to developing deeper understanding of how imperiled reefs function at the bottom of the ocean, and could change the current view of phosphorus cycling in reef ecosystems. In the future, this knowledge could aid in understanding of effective management of phosphorus on land, such as pulling excess phosphorus out of wastewater.

“This is a great step forward in showing the functional significance for some of the bacteria in sponges, moving beyond an understanding of what bacteria are present to what they are doing for the sponge and for the community,” said Hill.

“Phosphorus sequestration in the form of polyphosphate by microbial symbionts in marine sponges” by Fan Zhang, Leah Blasiak, Ryan Powell and Russell Hill of the University of Maryland Center for Environmental Science’s Institute of Marine and Environmental Technology and Jan Karolin and Chris Geddes of the University of Maryland Baltimore County’s Institute of Fluorescence, was published in the February 23, 2015, issue of Proceedings of the National Academy of Sciences (PNAS).