Balance of nitrogen, phosphorus, and zooplankton key to coral nutrition 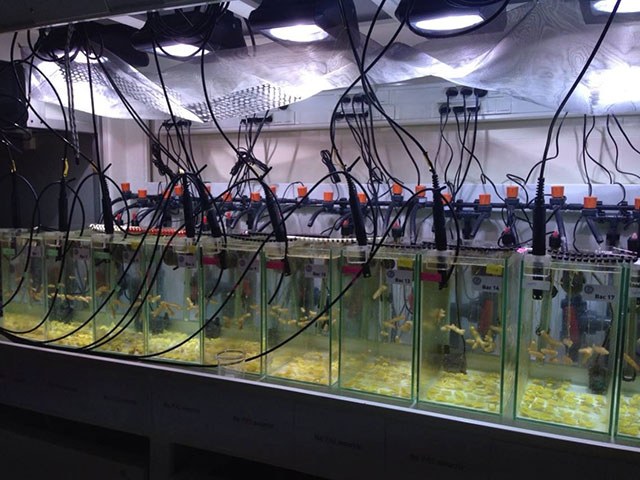 A Balanced Diet is Good for Corals Too, Study Finds

A new study found that a nutrient-rich, balanced diet is beneficial to corals during stressful thermal events. The research led by scientists at the University of Miami (UM) Rosenstiel School of Marine and Atmospheric Science and the Centre Scientifique de Monaco concluded that the particular nutrient balance in seawater is what matters most.

The research team placed specimens of the yellow scroll coral, Turbinaria reniformis, collected from the Red Sea in separate seawater tanks with varying temperature and nutrients. The corals were subjected to two different inorganic nutrient enrichment scenarios – increased nitrogen only or increased nitrogen and phosphorus at varying temperatures – 25 degrees Celsius to represent normal temperature conditions and 30 degrees Celsius to represent thermal stress conditions. Some of the corals also received organic nutrient enrichment of tiny ocean animals called zooplankton during the laboratory experiment. All of the corals were then returned to normal temperature conditions to examine their recovery.

“We found that the coral’s resilience to thermal stress totally depends on the kind of inorganic enrichment – if it’s ‘balanced’ or not,” said Erica Towle, an alumna of the UM Rosenstiel School.

The researchers found that excess nitrogen alone and zooplankton made high-temperature bleaching events worse. While excess nitrogen in combination with extra phosphorus and zooplankton afford the coral resilience to bleaching. This study is one of the first to assess the three-way interaction between the two types of nutrients enrichment and thermal stress on coral health.

The UM Rosenstiel School research team published a previous study in 2015 that showed the critically endangered Staghorn coral may benefit from supplemental nutrition to mitigate the adverse impacts of global climate change. The results revealed that temperature, CO2 and feeding each had significant effects on the coral’s growth rate. That study was the first to document that an endangered coral species, which was once found widely throughout South Florida and the Caribbean, can buffer the effects of increased CO2 in the ocean by increasing feeding rates.

“Excess nutrients from land sources and thermal stress will likely occur in concert in the future so it’s important to assess them together,” said Towle. “Incorporating nutrient levels in thermal bleaching models will likely be very important for coral reef managers in the future as ocean waters warm.”

The study, titled “The relationship between heterotrophic feeding and inorganic nutrient availability in the scleractinian coral T. reniformis under a short-term temperature increase,” was published in the early online version of the journal Limnology and Oceanography. The study co-authors include: Erica Towle and Chris Langdon of the UM Rosenstiel School; Leila Ezzat and Christine Ferrier-Pagès of the Centre Scientifique de Monaco; and Jean-Olivier Irisson of the Sorbonne Universités Laboratoire d’Océanographie de Villefranche. Funding was provided by MOTE grant #POR-2012-22 and support from the Centre Scientifique de Monaco (CSM)