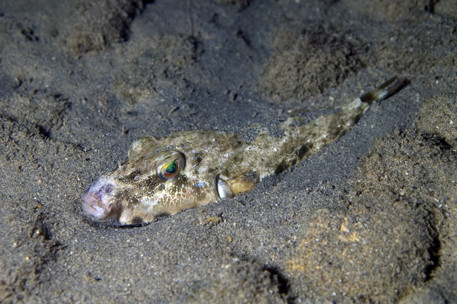 I have a little four inch Bandtail Puffer for your viewing pleasure today that I found buried in the sand on one of our many night dives. So many people ask me “what happens to the reef fish at night”? Well, from my observations each species does its own thing, but for the most part they all find a safe place to hide. For instance the parrotfish sleep everywhere, sometimes very hidden and sometimes right out in the open, while wrasses and other fish wedge themselves deep down into the coral crevasses and fire corals. During the day these Bandtails swim around without a care in the world but at night they bury themselves like the lizardfish and flounders, pretty smart if you ask me.

Sphoeroides spengleri is widely distributed in the western Atlantic from Massachusetts (USA) southward to Santa Catarina (Brazil), including the Gulf of Mexico and Caribbean, at depths ranging from very shallow waters to 45 meters. It is found in a variety of coastal and island habitats including reefs, seagrass beds, and turbid waters with low visibility. Sphoeroides spengleri is considered common, however not abundant, as they are generally solitary fish and considered to be highly toxic.  MORE