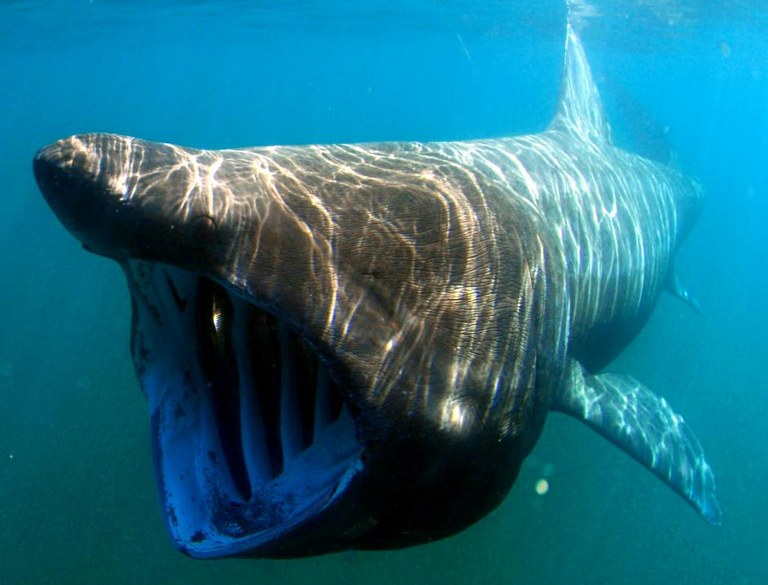 
The basking shark is often referred to as a gentle giant, eating nothing more than plankton with it’s massive mouth. It is the second largest fish with only the whale shark larger than this species. Up until the satellite tag surfaced just off the coast of Africa, scientists believed these fish only stayed in temperate waters and finding this shark in the tropical waters of Africa was a shocker to scientists who study this species.

This basking shark, referred to as Banba, was one of five basking sharks tagged back in July by the Irish Basking Shark Study Group as part of the Monster Munch Basking Shark Community Awareness Project. Each shark was tagged with a satellite tracking tag that relays information about the animal’s movements, location, water temperature, etc after it pops off after a pre-programmed length of time. On December 13, Banba’s tag popped off alerting scientists of its whereabouts along with additional information.

The roughly 3,000 mile journey surprised scientists as basking sharks are thought to only travel a couple hundred miles to the continental shelf in winter time. Some scientists, however, suspected that trips to tropical climes were at least occasionally made as some basking sharks have been found with parasites only found in the tropics.

Emmett Johnston, basking shark researcher stated that “Up until now there have been lots of different theories put forward about the sharks and one was that they hibernated over the winter because there wasn’t enough food in the waters around the north Atlantic. Other people said they went offshore and they have been tracked offshore in the winter. But we have been theorizing that they head further south to where the food is, like the larger whales from this area.”

For at least Banba, Johnston’s theory shows promise. As more basking sharks are tagged and tracked, more data will surface as to their yearly traveling habits.  This information is important to understand as the basking shark is listed as Endangered on both COSEWIC (Committee on the Status of Endangered Wildlife in Canada) and Canada’s SARA (Species at Risk Act).