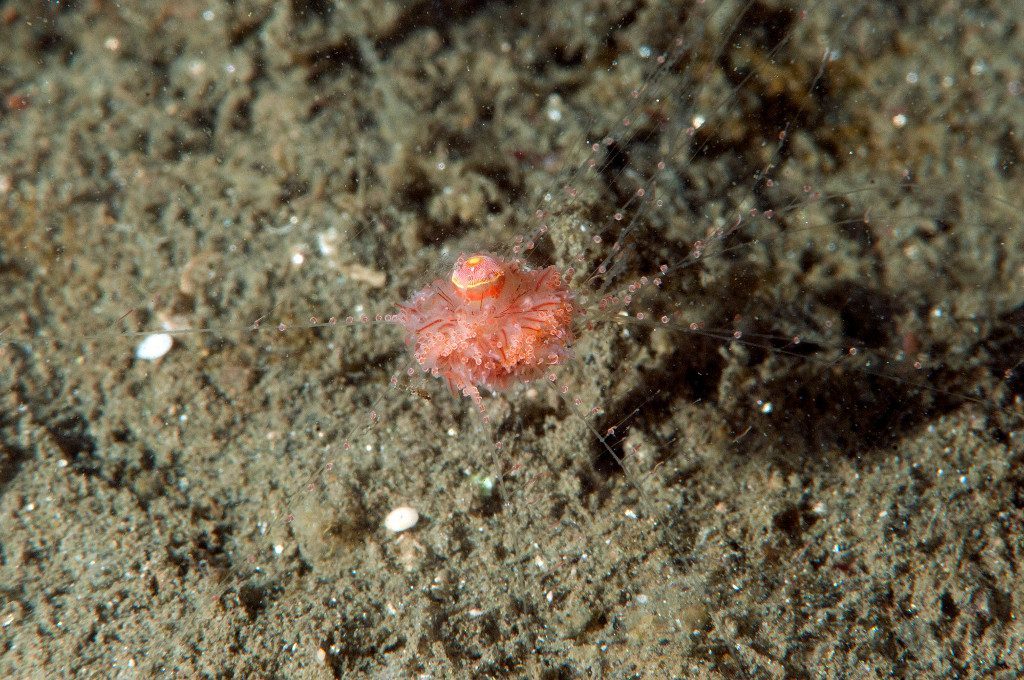 Few marine organisms are quite so obscure as the siphonophore. Next time you’re at a dinner party, try this little experiment: ask ten people to draw one and see what they come up with. Unless there happens to be an experienced blackwater diver or marine biologist in the crowd, you’ll like be met with looks of bewilderment and befuddlement. But though they may be little-known, siphonophores are truly one of the most fascinating forms of animal life on the planet and deserving of a bit more appreciation.

The Order Siphonophorae, in the Phylum Cnidaria, includes a number of unusual colonial jellies, the most famous of which is the Portugese Man o’ War—a nefarious beast that commonly washes ashore in large, stinging numbers. This group of jellies belongs to the Hydrozoa. If you’re familiar with the Millepora fire corals or the Distichopora lace corals or the freshwater hydra, then you are already familiar with what a hydrozoan is, but these are all benthic examples. The uniqueness of the Siphonophorae is that they are 1) planktonic and 2) colonial, with a high degree of specialization within the colony.

Siphonophores are like a small, floating city unto themselves, with many hands doing different jobs. Some parts specialize in flotation (pneumatophores), while others can actively direct the swimming direction (nectophores) or focus on prey capture and digestion (gastrozooids) or sexual reproduction (gonophores). But it must be emphasized that while these are colonial creatures, the colony is still a single animal created through asexual budding. The species do still reproduce sexually, and, interestingly enough, most are dioecious (i.e. an individual will be either male or female, but never both). 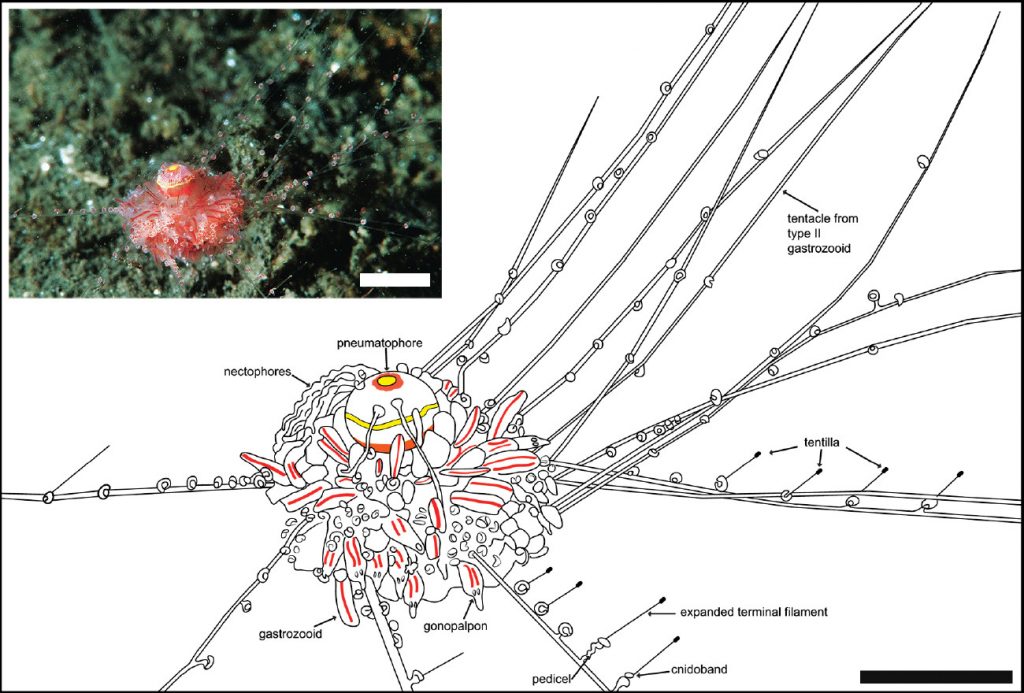 The Rhodaliidae is a small family, numbering just 15 species, which stands apart from all others in this surprisingly diverse order for being benthic. They manage to attach themselves to the bottom with their many tentacles while the body continues to float above the substrate, tethered down like a tiny hot air balloon. Most are tiny, just a few millimeters in diameter, with the largest being little more than an inch across, though the tentacles can extend many times this length. This has led to them being likened to a spider, extending these tentacles out in a metaphorical web to trap prey, which includes crustaceans, larval fish, and, allegedly, even flocculent organic sediments.

The family was first described by none other than Ernst Haeckel, the famed 19th-century zoologist and illustrator, but in the many years since their discovery we have gained only the most rudimentary understanding of their diversity and biology. This is mostly due to the great depths at which they occur, with most accounts coming from research submersibles working in waters 100-300 meters deep, though the group is known below 3,000 meters. But another challenge to studying rhodaliids is their great fragility. Take, for instance, this account given by a researcher who managed to bring a specimen to the surface:

“[It] was exposed for a short time to air temperatures of more than 30℃, and it obviously suffered a ‘heat shock’ and became stressed. It was gently cooled down in the aquarium, but the water quickly became milky white, probably due to release of spermatozoa (from the gonophores) and augmented with tiny grains, possibly nematocysts. The tentacles became heavily entangled, and the ectodermal surface of the components took on a denatured appearance. After a while most nectophores, all bracts, and the distal halves of all cormidial stems fell off the corm. At this stage, the components were transferred into formalin, but after one night they were found to have completely disintegrated. Even the large bracts, which contained a large quantity of mesogloea and were thought to be quite robust, dissolved, but fortunately drawings of them were made before preservation.”

The reason I bring this up, aside from these being such inherently curious organisms, is that a specimen was recently observed for the very first time on a coral reef. Diver Andrey Ryanskiy was exploring the wreck of the Muscoota, a popular dive spot in Milne Bay, Papua New Guinea, when he encountered and photographed a rhodaliid at around 26 meters. It measured 22mm across, far larger than most members in this group, and sported an attractive patterning of pinks, reds, and yellows. It has been tentatively identified as a species of Archangelopsis, though further study is needed to determine whether it is identical with A. typica—a species reported from deeper waters of Japan and Indonesia—or if it might instead be an entirely new species.

Finds like this are few and far between… to stumble upon an entirely new type of coral reef organism is almost unheard of, and it raises so many questions when it comes to the very basics of rhodaliid ecology. Are these benthic siphonophores common to certain reef habitats… have they simply been overlooked this whole time? Maybe Milne Bay has some unique quality which is amenable to this one species, or perhaps this one individual simply got lost along the way, floating beyond where it should have been?