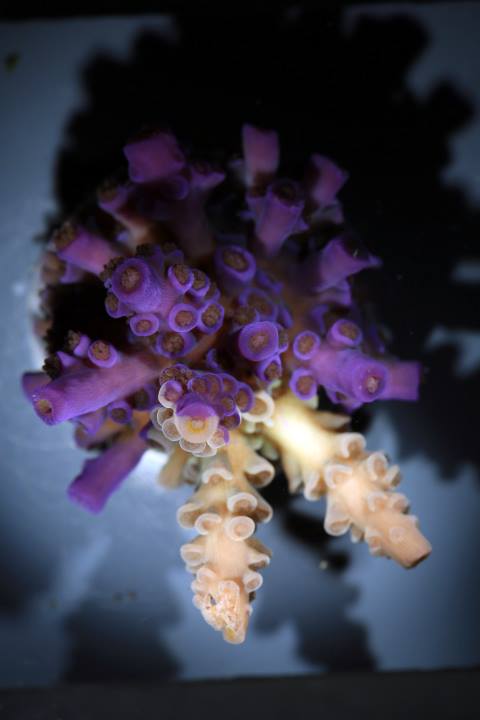 Check out the latest images from Jamie Craggs and his team of scientists at the Horniman Museum and Gardens’ Project Coral! These bichimera Acropora tenuis are just one of the many, many exciting results of this groundbreaking project, whose details I was honored to outline in an earlier reefs.com post here. According to Jamie, “The two different coloured genotypes settled as planula a year ago and while each side of the colony is expressing its own colour, the branch formed on the boundary is split.” 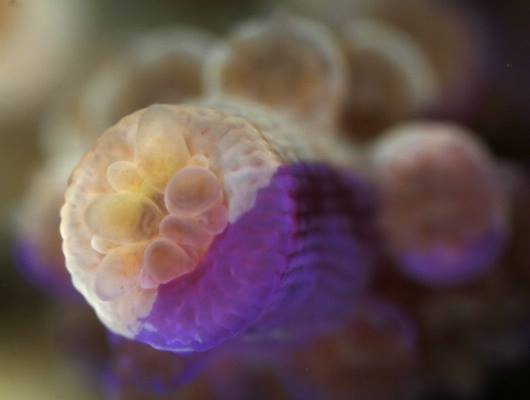 Acropora tenuis is mainly found in the Red Sea and the Western Pacific, and in 2008, this beautiful, reef-building coral became classified as near-threatened, and was listed in Appendix II of CITES regulations. Since it grows in shallow reef environments (generally, between 8 and 20 meters), subtidal areas, and upper reef slopes, it is especially vulnerable to negative environmental changes, such as rising ocean temperatures, ocean acidification, sedimentation, and pollution. It is also subject to over-harvesting for the aquarium trade (Acropora species are one of the three highest collected for this purpose) and predation from the crown-of-thorns starfish, whose numbers have been on the rise since the 1970s and who are known to wipe out huge swaths of Acropora, their preferred prey.