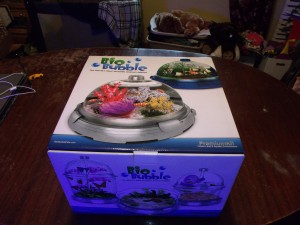 Since it was released to the market in 2010, the BioBubble Animal Habitat has not undergone many changes in design with the exception of some minor tweaks to the filtration system and appearance. The Gen 2 model was unveiled during the Global Pet Expo last month and I was lucky enough to end up getting the opportunity to use and review one of these interesting multi-use pet systems. 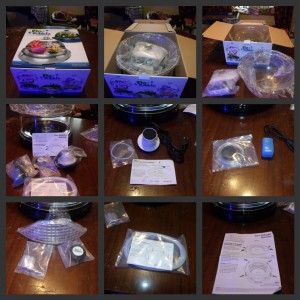 I’ve always been curious about this product since the first time I saw one in a LFS about 2 years ago so I was happy to find out I’d been chosen to do a review. Not knowing a whole lot about them, I was on the hunt for information and came across a few reviews. Information about the system is a bit hard to come by and some of it is completely incorrect. One well known reef hobby site labeled the product as fail and claimed that the “air driven” filter system was weak at best. I was a bit concerned. I don’t mind having to be the bearer of honest bad news when reviewing a product but I hope to have some good news to go along with it. Once the box arrived and I had a chance to look at the system myself I was put at ease finding that the filtration is not air driven at all but is a submersible pump that pulls water down through a activated carbon infused fiber pad and expels it with some force near the bottom of the aquarium. Because I couldn’t find a whole lot of information about the actual components I ended up calling the company direct. I was connected with a man in marketing named Brad. He and I talked for at least 30 minutes about the history of the BioBubble, where it is now and where the company hopes to see it go. Brad told me that since the inception, BioBubble has always came with a power filter and separate air pump. We talked about the site and review I mentioned above, and he knew exactly which article I was talking about. One of the concerns among many hobbyists is the images shown of the the animals being kept in the system. This initially was a concern of mine as well but after talking with Brad, I am convinced that he and the company are not condoning or influencing people to violate the unwritten ethics rule concerning animal size to environment comparison. The images used are simply no more than easily identifiable animals which are familiar to the seasoned hobbyist and new comer alike.

The system comes well packaged with each component (filter, air pump, dome gasket, etc.) contained in its own bag. A description of the component and assembly instructions accompanied each piece. For this review I of course set the BioBubble up as pico. 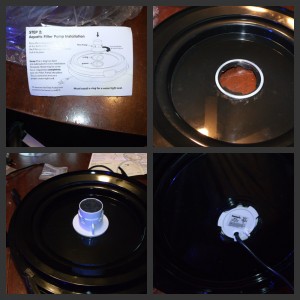 I started with filter first. One of the changes that BioBubble Pets made to the unit is way the filter is assembled into the bottom of the unit. Apparently on the first model the filter had to be in place no matter what type of animal was being kept. On the Gen 2 a removable plate covers the opening where the filter locks onto the base. I regret not getting any photos of the base with the plate in place. Installation of the O-ring (which comes pre-greased with food safe grade silicone grease) was simply done by pushing it into the groove it seats with in. The cord is fed through the hole and the filter simply twists to lock in place.  As you can plainly see, the filter is powered separately from the air system. Any review that you may have read claiming these units are filtered by an air driven filter are bogus and untrue.

The air pump and assembly

Assembly of the air pump should be an easy task but this time it was a lesson in patience and frustration. The instructions show a valve to control air flow from the tiny pump. (This pump should appear in Too Cute by the way, it’s so small, compact and well, cute) I must have torn through the box and pile of waste packaging a hundred times looking for a valve that was not there. I finally gave up looking and grabbed one of the TLF micro valves I keep on hand. During my conversation with Brad I asked if the valve was supposed to come included in the packaging. He said it was with the Gen 2 but did not with the first. He also said that some of the first Gen 2 packages put together did not get the valve due to an over sight on packaging. He was apologetic and said that if a kit missing the valve is sold, the buyer need only to call the company and a valve will be sent out post haste. Over the hump and in the clear for pump installation. Wrong. The next frustration came from my oversized fingers trying to get an undersized, not-so-pliable airline over the barbs on the connections. At first I thought it was an exercise in futility and almost grabbed a few feet of standard air line. But then I figured out that by holding the air line steady with one hand and rotating the pump with the other, the line slipped right onto the barb. Of course to do this with the filter side I’d have to disassemble the filter from the base but at that point doing so was a must. 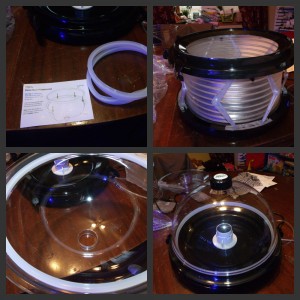 The last bit of assembly need to make this habitat into a cool saltwater pico was to install the dome gasket. This was simply done by removing the dome per instructions and pushing the groove in the silicone gasket onto the lip around the domes seat. Once that was finished all that was left was to add the sand and rock, fill it with water and add some live stock.

Because I was rushed to get this set up and in use I decided to add 3 pounds of rock that came from an existing, mature 90 gallon macro tank. I also took 2 pounds of sand from the same system. Since there would be livestock in the tank, I need to ensure sufficient nitrifying bacteria were present. In addition to the live rock I also added 3 more pounds of dry rock. The theory is that having 6 pounds of porous rock in a pico will give it a bio filter that will handle almost any load thrust upon it. Because this little aquarium is set up within 4 feet of the 90 gallon, I used water from the 90 to fill it. This will make water changes a breeze. 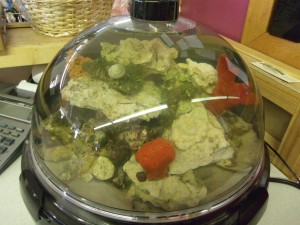 Because there is no light source I was limited to setting this up as an NPS or fish only pico. I love fish but to me just looking at a fish would be extremely boring. This a fun product and the tiny environment created needs to be equally as exciting. I gathered all of the livestock and put them into a temporary tank, filled the BioBubble with about 2.5 gallons of water from the 90. I followed the directions to a tee and filled the raised column to just under the bezel. Once the dome was re-installed and locked on I pushed the column back down and flooded my desk. With the dome locked down I wasn’t happy with the level of water inside the pico so I got some more from the 90 and added just a bit. I raised the column again and removed the dome so I could check the water level. It was well below the bezel so I slowly began pushing the column back down. This time I put the cap back on and took it easy. Once it was locked back into place the water level seemed appropriate. I tossed a 1/4 cube of frozen mysis in through the opening and left it for a day. I wanted to test for ammonia and nitrites which turned out to be none after 24 and then again 48 hours later. I was convinced it was o.k. to add livestock. I attached the few small sponge frags I had, grabbed the snails, hermits and micro brittle stars, caught the Masked Goby and two Sexy Shrimp. Once everything was in the little tank it didn’t take long for them to get accustomed to their new digs. The little goby was eating within a few hours and everyone was right at home.

As you heard in the video I love this little pico tank. Intentions were to move it out of the store once the review was complete but today I really enjoyed watching the fish and other animals go about their business while I worked on bookkeeping and other mundane and otherwise depressing tasks.

Considering I only used the system as an aquarium I can’t really say how well it would work when keeping other animals. But I can definitely see setting it up as a terrarium using the included riser or with the optional 12″ riser. It would make a great habitat for a child to learn about the stages of a butterfly’s life from grub to adult.  The pros when setting the BioBubble up as a pico or aquarium are:

I’m sure there are those that can and will pick this great product apart. Personally only a few negatives come to mind so far. 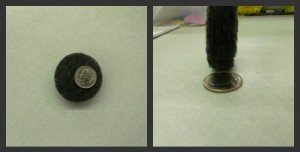 Here’s a video showing what a small amount of sand will do to the sealing capabilities of the gasket.

This tank will have a home on my desk for as long as the business is carrying on. Look for the follow up to this article and the review of the optional 10K LED lighting system BioBubble Pets has created for this system.