The Biogeography and Evolution of Meiacanthus: Part 2

Surprisingly, this primarily marine genus has a single species which specializes in brackish waters. Specimens of M. anema have been found far upstream in pure freshwater, though it is presumed they are incapable of breeding there. They also seem to have a preference for very shallow waters, not more than a meter in depth.

Morphologically, this species is placed in its own subgenus (Holomeiacanthus), which lies basally in the Meiacanthus phylogeny. This is the only species in the genus which has more than 6 dorsal fin spines (modally 8), which would seem to indicate a similarity with the rest of the Nemophini, all of which have 10+ spines. The unusual ecological niche perhaps indicative of an ancient lineage which has survived by occupying a marginal habitat.

I’m not aware of this species having ever been exported for the aquarium trade (though other freshwater blennies have been). In all likelihood, were it to ever be collected, it would be made available to freshwater aquarists. The common name of Threadless Blenny has been applied, which is a literal translation of the specific epithet and alludes to the rounded caudal fin.

The two species comprising this isolated lineage of fangblenny (Allomeiacanthus) present behavioral and morphological characteristics which help to differentiate them from their congeners. Most noteworthy is the ventral (vs. dorsolateral) placement of the venom gland, leaving this structure fully encapsulated by the dentary bone. Additionally, there is a reduction in the number of pores associated with the mandibular and posttemporal sensory canals of the head, as well as a completely absent lateral line (present to some degree in all other taxa). 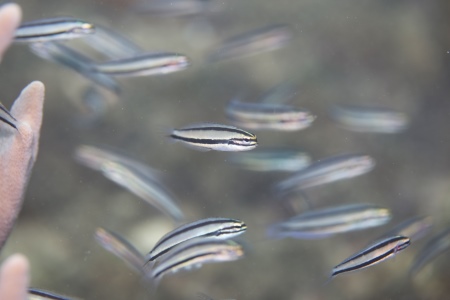 A large school of M. ditrema at Okinawa. Credit: OceanBlue

Behaviorally, these two species are reported to form moderately-sized shoals which hover several meters off the reef feeding on zooplankton. This is in sharp contrast to the many species seen elsewhere in the genus which live far closer to the substrate, typically feeding on benthic invertebrates.

M. ditrema is by far the more widespread of these two, occupying a range which includes nearly all of the West Pacific. Specimens from Fiji are reported to differ in the relative thickness of the dorsal fin stripes of males, though photographic evidence to confirm this is wanting. The species is sexually dichromatic, with males having a more heavily pigmented dorsal fin. 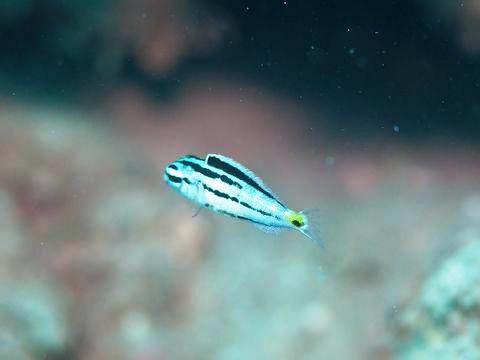 A juvenile M. urostigma from Bali. This represents a range extension. Credit: mdx2

M. urostigma is a poorly known species documented from the Eastern Indian Ocean. Groups as large as 100 specimens are reported, occurring in shallow waters of less than 10 meters. The piscivorous cardinalfish Cheilodipterus quinquelineatus has been suggested as an apparent mimic, though the similarities are weaker here than in many other examples from these two genera. The cardinalfishes stand to gain doubly with their faux-fangblenny subterfuge, as they are less-likely to be predated on while also being able to more easily sneak up on their intended prey. A more devious fish, there is not.