This quintumvirate of West Pacific fishes is easily recognized by the single (or double) stripe running along the length of the body and the short pelvic fins (which are elongated in the males of most other striped taxa). Some of the least-known species occur here, with photographs of live individuals being almost non-existent for most. And, unlike with other fangblenny groups, we see a highly diverse and complex speciation centered within Indonesia—a similar pattern of speciation as that seen in fishes like Chrysiptera, Pictichromis and Paracheilinus.

M. vittatus, found in New Guinea, is a griseous fish with a black stripe passing through the eye and extending from tip to tail. A similar form occurs around Sulawesi, but in this phenotype (described as M. vicinus) there is also a dorsal stripe present. To the west, a nearly identical form (M. geminatus) can be found in the Philippines and Borneo and south to Java, which differs in the ochreous color beneath the medial stripe and a less well-defined dorsal stripe. Heading south we find M. abruptus at Komodo and Bali, a species which combines the distinct stripes of the Sulawesi vicinus with the ochreous ventral half of the nearby geminatus. And, lastly, Australia has a double-striped form in M. luteus which is uniquely pigmented in yellow. 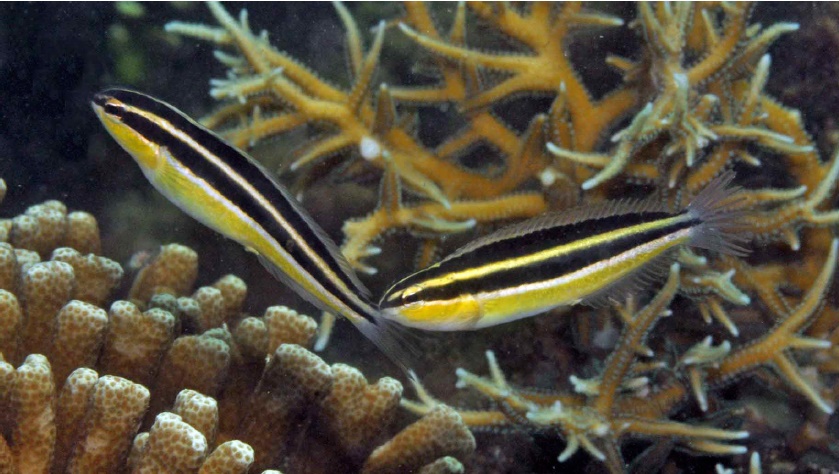 This whirlwind tour through the vittatus group is indicative of how little we know of these fishes. Given the tight distribution limits, there are undoubtedly areas of overlap and potential hybridization, though none has been reported yet. And, given the highly endemic nature of these taxa, we have to question whether the Western and Eastern Australian populations are truly conspecific. There are surely many more discoveries to be made in regards to these little known blennies, but a great deal more documentation is needed beforehand.

As aquarium subjects, I’m not familiar with any of these having been exported. Judging from in situ photographs, these fishes seem to have a preference for silty reefs dominated by soft corals—the type of habitat seldom frequented by fish collectors. Combined with their chromatic subtleties, it’s no wonder these have been virtually ignored in the aquarium industry. To wit, there are more Personatus Angelfishes circulating around than there are Meiacanthus vicinus!

The Sulu Fangblenny (M. abditus) introduces us to a diverse lineage of taxa which share two key traits: 1) The pelvic fins of males are greatly elongated. 2) There are three stripes running the length of the body. This latter character is shared with M. grammistes, but numerous differences in coloration and fin shape suggest their relationship is more distant. This diverse group of species includes some of the least-known and enigmatic taxa in the genus, and the phylogeny proposed here is only tenuously supported. As the morphology is quite consistent across the group, color patterns, ecological preferences and biogeography are key to understanding their evolutionary history.

M. abditus was originally described from specimens collected in the early 1900’s from the Sulu Islands between Borneo and the Philippines. Three juveniles were dynamited form a shallow reef, while a larger specimen was trawled at around 35 meters. Since then, photographs of similar specimens have been taken at Flores, Nusa Tenggara, Sabah, the Solomon Islands and the D’Entrecasteaux Islands off the eastern tip of New Guinea. The latter pair of records are previously unreported range extensions, indicating this is a widespread species in the Coral Triangle. 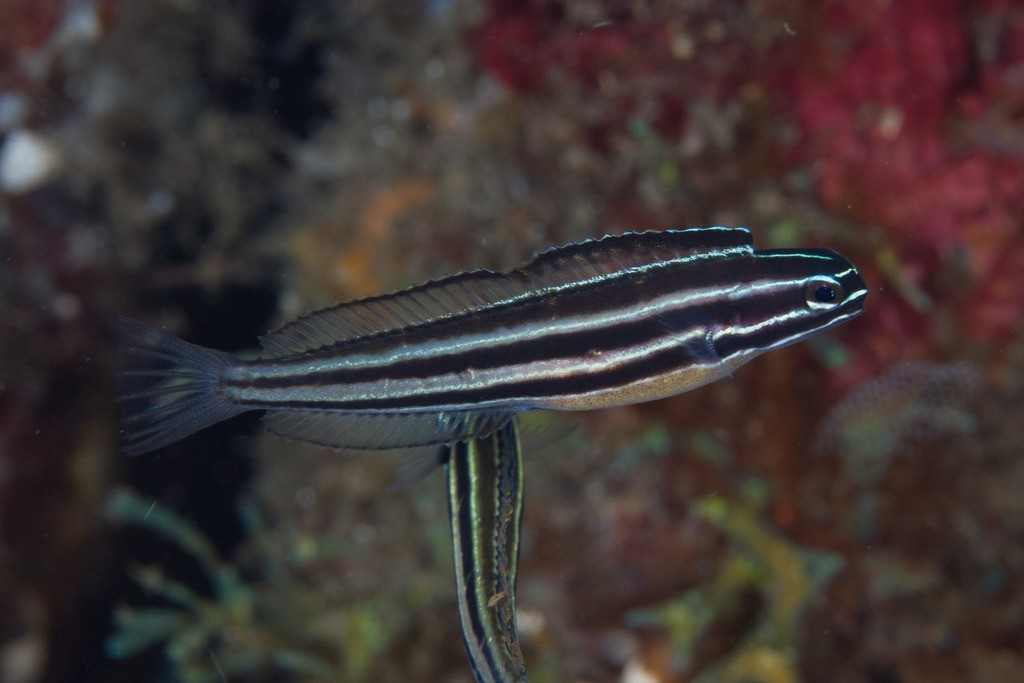 To date, I’m unaware of this species having ever been collected for the aquarium trade, though, if it has been, it is unlikely it would have been properly identified. Keep an eye out for any unusual striped fangblennies, as this shallow-water, widespread species is likely to pop up eventually. It is a small wonder that this species remains as poorly known as it does. Only with the discovery of more specimens will we begin to understand the behavioral and ecological factors which explain its elusiveness.