These three species share much in common with M. abditus, including a propensity for shallow-water coastal reefs. Were it not for their common presence in Melanesia, it would be easy to presume these two formed a single group. But in light of their broad sympatry, as well as the distinct white crossmarks of abditus, I have chosen to treat these as separate clades. Specimens are rarely available in the aquarium hobby, making these some of the rarest fishes to be had. 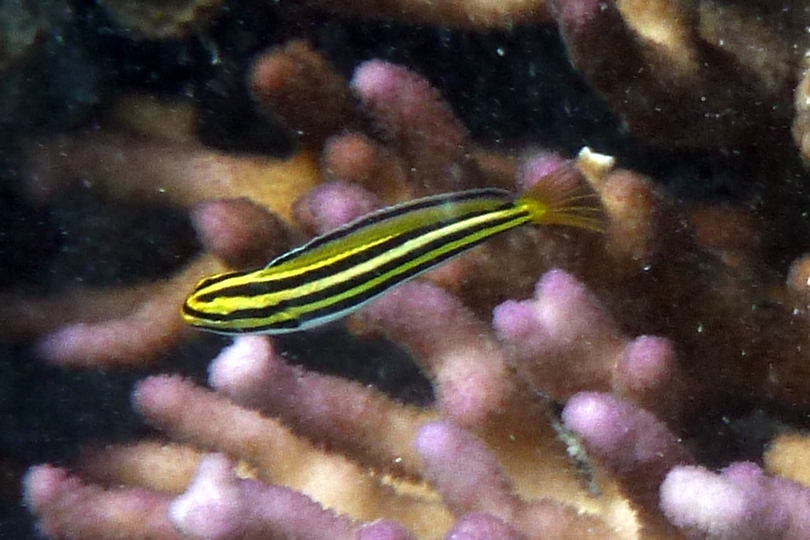 The most distinctive member is the Australian M. lineatus, which differs in the alternating black and yellow stripes, as well as the black stripe running along the dorsal fin. It is only known from the Great Barrier Reef, though it seems likely it would occur in regions like New Caledonia and Vanuatu. For such a colorful fish from such a well-dived location, there are shockingly few photographs depicting it. The species is reported from lagoons and seaward reefs to a depth of 18 meters, which makes it all the more puzzling that so little documentation exists. This is also the only species in its group which has been collected for aquarists, but even this has occurred only rarely. Information regarding such aquarium specimens is essentially non-existent outside of some Japanese magazines. 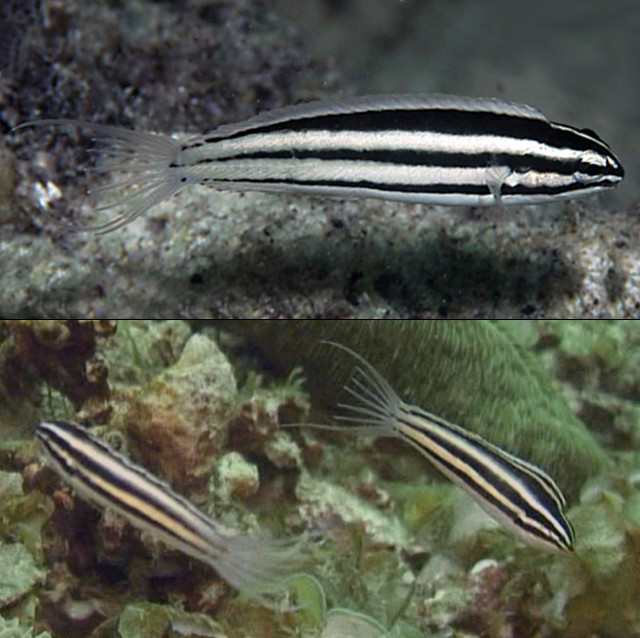 Moving north into New Guinea and the Solomon Islands, we find M. crinitus, which differs most noticeably in its black and white striping. Known photographs of live specimens show variation in the presence of a stripe in the dorsal fin. The species description discussed large males possessing abditus-like exaggeration to the caudal fin, though existing photographs show little evidence of this. Clearly, there is a great deal of ontogenetic variation which takes place in crinitus. Perhaps the most salient identifying trait is the thinning of the stripes in the caudal peduncle. The lowermost stripe becomes broken, leaving a small black dot posteriorly, like a piscine exclamation point.

Holotype (and only) specimen of M. naevius. Note the pattern of the caudal peduncle. Credit: Smith-Vaniz, 1987

Finally, a single specimen collected at Western Australia in a shallow-water (3-6 meter) fish trap was described as M. naevius. It is still the only known specimen, and no record of its coloration in life exists. It’s only distinguishing feature, other than its range, is a relatively unmarked caudal peduncle, with the middle stripe having a remnant present posteriorly. This is alluded to in the scientific name, which translates as “birthmark”. Given the similarities seen in populations of Australian M. cf atrodorsalis, it’s possible naevius will be found to be a primarily yellow species, like its presumed sister M. lineatus.

Easily the least known species in the genus are these deepwater fangblennies. There is no clear unifying characteristic for these four, other than their general rarity and an apparent preference for steep seaward reef walls below 35 meters. 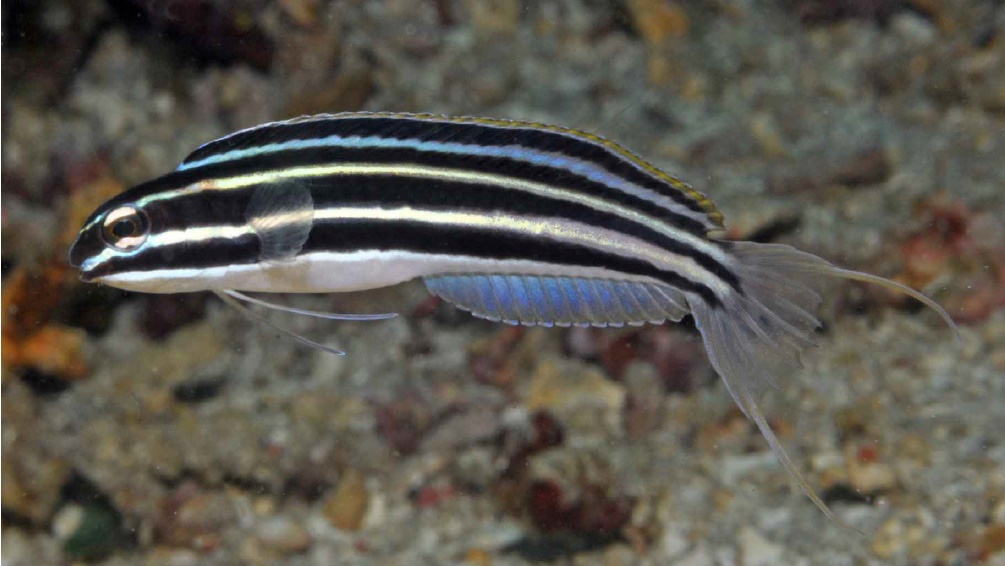 M. limbatus was originally described from a single female collected in the Bismarck Archipelago off Northeastern New Guinea. The only specimens which have been recorded since were found at Helen Reef, a miniscule speck of sand and palm trees located near Palau. These specimens were seen at a relatively shallow 22-34 meters. It is unusual in having a yellow caudal fin and an aberrant black “chin”. 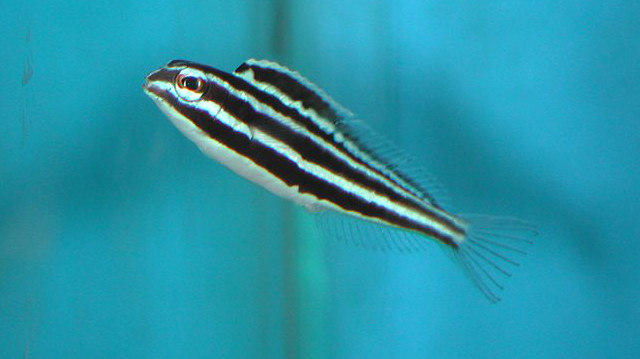 Lastly, a specimen collected in the Marshall Islands appears to represent yet another distinct species. The relatively deep waters (100+ meters) it was found in would suggest it belongs with some of these other deeper-water taxa, but, without morphological and genetic study, this is just a guess. The same can be said for the relationships of all the other taxa in the trilineated groups. Our understanding of these obscure fishes is still in a very nascent state, and the arrangement used here is mostly guesswork based on the apparent biogeography and ecological preferences rather than any obvious morphological characteristics. Given this weak foundation, it would be no great surprise if these eight taxa have another arrangement entirely. 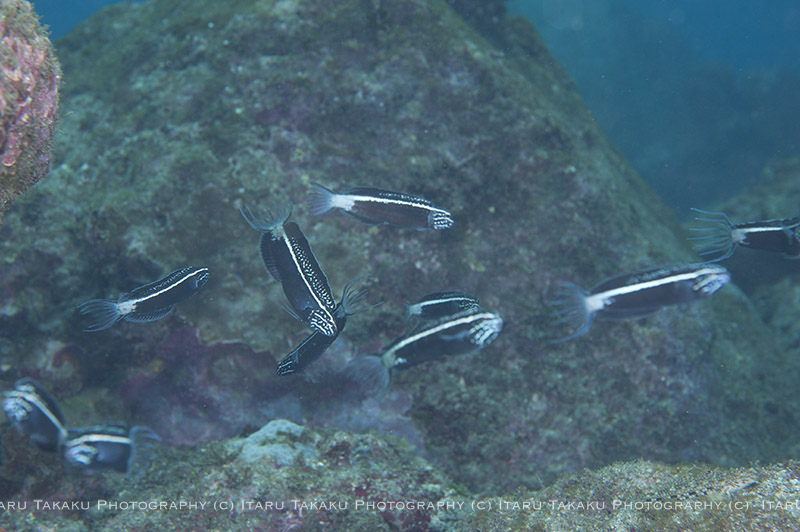 My thanks to Dr. Gerry Allen, Rudie Kuiter and Dr. Mark Erdmann for sharing their photographs. LemonTYK provided a wealth of information on the availability of fangblennies in the aquarium trade. And a tip of the hat to Dr. William Smith-Vaniz, whose efforts to unravel this group laid the groundwork for this study.