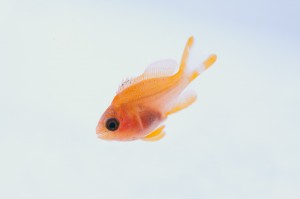 Happy New Year! I hope you all had a wonderful holiday and are looking forward to the year to come. My name is Noel Heinsohn, and I am an aquarist at the Long Island Aquarium. I have been working here as the aqua culturist for the last year and a half after Todd Gardner left. I don’t know about you but my year has been off to a great start! I made myself a promise at the beginning of last year to raise at least one pelagic species in 2014. Little did I know, that not only would I accomplish it, but it would be a species first!

Back in October, I collected eggs out of Joe Yaiullo’s 20,000 gallon broodstock tank. (He says it’s a reef tank but I think it’s a nice broodstock tank with some pretty coral in the background.) At first I started with hundreds of larvae, which eventually dwindled down to just two. A few weeks into rearing, Todd stopped in to take a look at my “mystery larvae”, and suggested they were anthias. At first I didn’t buy it because it would’ve be too good to be true. The last time I raised a larvae from the reef tank and thought it was anthias it turned out to be Neoglyphidodon melas( Bowtie damsel). 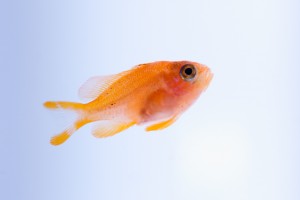 To my astonishment, after 80 days post hatch (dph), I could tell that it was a 100% captive-bred anthias. Raising these anthias has been no easy task. The largest of the larvae developed an orange coloration around 70dph and settled at 80dph.  As of right now (94 dph), I am not sure which exact species it is, but I am certain I will find out in the weeks to come. The second larvae, however, has yet to gain any coloration, is about half the size of its tank-mate, and has yet to settle. It still spends its time at the surface, having nothing to do with PVC structures that are on the bottom. I am unsure if it’s a runt or something else entirely. Only time will tell, but once I have more information, I will let everyone know.

I am hoping to replicate this rearing process in the near future to better understand anthias development. Just  last week we collected more eggs out of Joe’s reef tank, and I am hoping for a second chance with anthias to see if I can not only repeat my success, but also to see if I can boost the quantity. 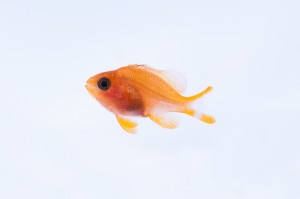 I want to thank Joe for providing me with this awesome broodstock and encouraging my need to breed; Todd Gardner for his enduring support and his willingness to advise me; and the entire aquarist team at the Long Island Aquarium for covering my days off. This is the product of their hard work just as much as mine!

More information about the rearing process to follow soon!