Bizarre Sofa Shark Found Off The Coast Of Scotland 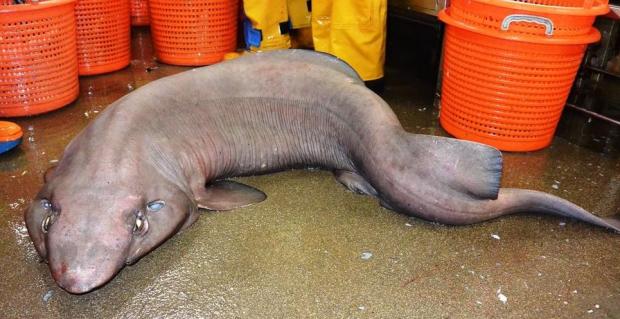 Lets get this straight, the Pseudotriakis Microdon, commonly known as the ‘sofa shark’ or ‘false catshark’, does not conjure up the typical image people think of when ‘shark’ comes to mind. And it usually isn’t found in Scotland. This strange looking ground shark has a very soft and flabby appearance. It typically resides at depths of over 1400 feet off the continental and insular slopes. The largest Sofa shark found was noted at 10 feet in length and 275 pounds in weight. Even more interesting is the large, oily liver, which accounts for twenty-five percent of the sharks weight. It has over 200 teeth that it uses to prey on bottom feeding bony fishes and shrimp. I can imagine that it gets the name sofa shark, based on its resemblance to a discarded old sofa. It also has an unusual form of reproduction, using intrauterine oophagy. Oophagy essentially is “egg eating”, or the practice of embryos feeding on eggs produced by the ovary while still inside the mother’s uterus. The sofa shark only produces two embryos at a time, and it takes a long time for the young to mature, which can also account for why these sharks are so rare. This most recent sighting in Scotland is only the second time a sofa shark has been seen in Scotland, the last time being more than 15 years ago. MORE