Most people probably don’t realize the extent horseshoe crabs have effected their lives and medical research. Every year, over half a million horseshoe crabs are bled for their blood. The blood, which happens to be blue, is sought after by pharmaceutical companies. The firms are interested in the blood cells of horseshoe crabs which contain special chemicals found only in their amoebocytes called coagulogen. 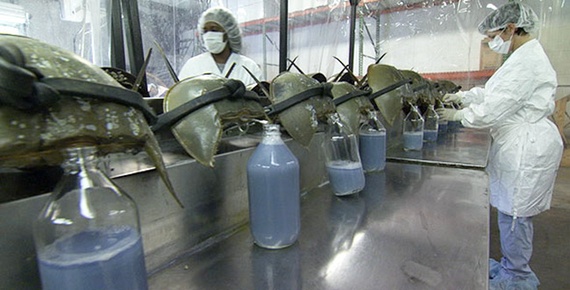 These chemicals are important because of what they do for the horseshoe crab which is to detect bacteria and trap them in clots. The pharmaceutical companies harvest the coagulogen, which they use to detect any bacteria which comes in contact with the blood. Scientists are able to see whether or not a solution has any bacteria by using the coagulogen. If bacteria is present, the coagulogen forms a clot, if no clot, the solution can be considered free of bacteria. This test process is known as LAL which stands for Limulus amebocyte lysate test (after the species name of the crab, Limulus polyphemus). According to PBS’s Nature documentary, “Every drug certified by the FDA must be tested using LAL, as do surgical implants such as pacemakers and prosthetic devices.” This kind of testing requires large supplies of large horseshoe crabs. The pharmaceutical collectors bring the crabs to the lab, where 30 percent of their blood is taken. They are then returned to the ocean far away from where they were collected, so that the crabs are not taken for blood more than once.This process takes between 24 to 72 hours, and it is estimated 10 to 30 percent of the animals die in the process. As for the crabs who make it after being released back into the ocean, studies have been done to see what effect the bleeding has on them. Researchers at the University of New Hampshire and Plymouth State University decided to study crabs who had been bled by attaching accelerometers to female horseshoe crabs.   They reported their results in a new paper in The Biological Bulletin, “Sublethal Behavioral and Physiological Effects of the Biomedical Bleeding Process on the American Horseshoe Crab, Limulus polyphemus.” The study found that the process seems to make the crabs lethargic and less likely to mate.   MORE