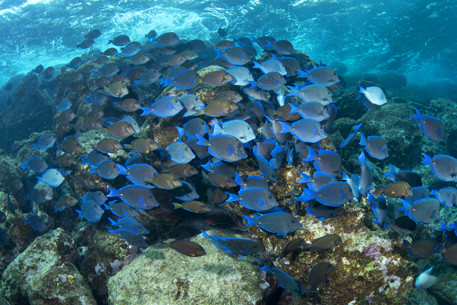 Good morning friends, what a busy week!!! Yesterday, I ran into a beautiful blue wall of Blue Tangs and ended up following them until I ran low on air. This is called a Blue Tang Aggregation and it’s one of the greatest underwater shows on the planet.  We see these large groups called aggregations on the reef here every single day and I still never get tired of it – they are just so beautiful. Adult blue tangs have three social modes: territorial, wandering, and schooling.. Territorial adults defend their home rage from other members of the species. Schooling adults are not aggressive. Wanderer adults are not aggressive nor do they interact with other individuals like schooling fish do. Wanderers are mostly chased by other fish including Ocean surgeonfish and damselfishes. Occasionally, Blue Tangs form large multi-species aggregations with other surgeonfishes as seen above.

Blue tangs may benefit from forming schools for two reasons. First, individuals may experience lower rates of predation when feeding in large groups. Second, by feeding in groups, fish might be able to work together to overcome the territorial defenses of other fishes. For example, a single blue tang is easily chased away by an aggressive damselfish defending its territory. However, when a large school of blue tangs and their schoolmates try to feed on algae in a damselfish’s territory, there is little that the damselfish can do. When this occurs, the damselfish frantically, but ultimately fruitlessly, attempts to chase away their more numerous attackers while the school consumes all of the algae in their territories. MORE