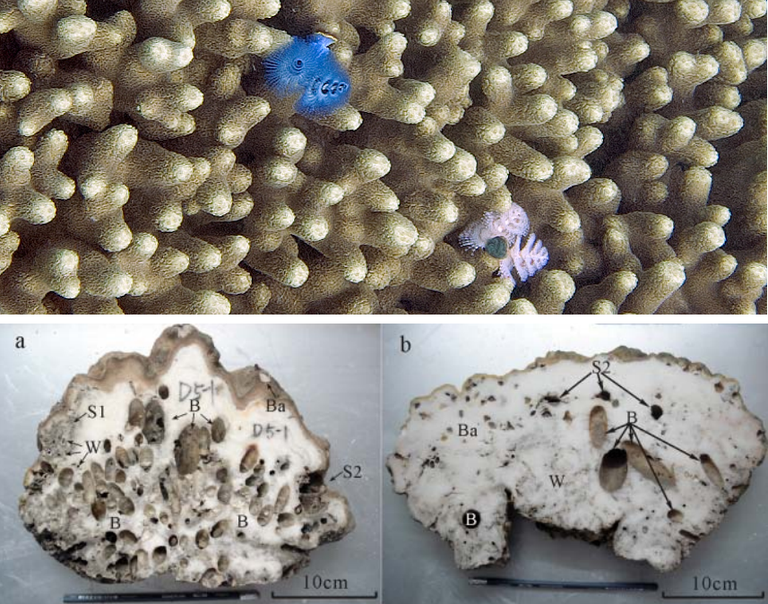 
Urban development and agricultural activities increase nutrient levels in local waters. This becomes especially problematic around reefs as higher nutrient levels not only bring on eutrophication but also favor increased filter feeding activity.  Organisms like bivalves, sponges, polychaete worms, and barnacles are filter feeders and many are also bioeroders as they can tunnel into the reef structure.  Why would boring organisms cause problems? Because reef building corals like Porites can become damaged due to their activity.

Researchers Tianran Chen, Shu Li and Kefu Yu published their article about the problem in the latest issue of the journal Coral Reefs (pdf).

What they did was evaluate bioeroder populations on Porites corals in northern South China Sea and compare these populations to where the coral was found: either in areas close to urban / agricultural areas or far away from these areas.

Their research indicated that the primary bioeroders were bivalves (Lithophaga spp.) and the sponges (Cliona spp. and Cliothosa spp.) and they accounted for 80% of the bioeroder population on Porites corals. The remaining 20% was made up of polychaete worms and barnacles.

They also found that bioerosion was worst close to urban / agricultural areas (10.34–27.55 %) whereas corals from relatively unpolluted areas were least affected (2.18–6.76 %). According to Chen:

High levels of bioerosion, especially boring bivalve infestation, significantly weaken the corals and increase their susceptibility to dislodgement and fragmentation in typhoons, limiting accumulation of limestone framework. This study implies that carbonate accretion and reef development for high-latitude coral communities may be limited in future high-CO2 and eutrophication-stressed environments.