Box jellyfish fish for their food 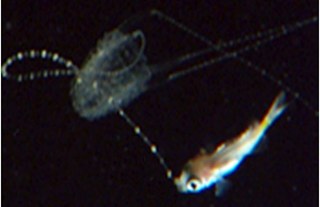 It’s an impressive feat by any standards, but particularly so for an animal that doesn’t have a defined brain.

The laboratory-based study of Carukia barnesi, the tiny but deadly Irukandji jellyfish, was conducted at James Cook University’s Australian Institute of Tropical Health and Medicine in Cairns.

The research has recently been published in the online journal PLOS One.

“This species is small, less than two centimetres across the bell, they’re 96% water, they lack a defined brain or central nervous system, and yet they’re using their tentacles and nematocyst clusters like experienced fishers use their lines and lures,” lead author Robert Courtney said.

“They’re not opportunistically grazing – they’re deliberately fishing. They’re targeting and catching fish that are at times as big as they are, and are far more complex animals. This is a really neat animal that is displaying a surprisingly complex prey capture strategy.

The researchers were able to catch Carukia barnesi in the act by filming them through a full day and night cycle, using infrared-sensitive equipment to record behaviour in times of complete darkness.

“We already knew what they ate, because gut contents analysis is pretty straightforward with an animal that’s transparent, but the fishing techniques we observed were a surprise,” senior researcher Associate Professor Jamie Seymour said.

“During the night we saw they were less active and not fishing. They contract their tentacles down to four to five centimetres long, with the nematocyst clusters all bunched up. We believe they may do this to conserve energy when visually oriented prey (larval fish) may also be less active.”

In daylight, the tiny jellyfish went fishing – stretching their tentacles out as long as 1.2 metres with the nematocyst clusters evenly spaced along each almost-invisible thread, like a fishing line.

“The nematocyst clusters look like a series of bright pearls, which the jellyfish twitches to attract the attention of its prey, like a series of fishing lures,” Mr Courtney said. “It’s a very deliberate and selective form of prey capture.”

Once a fish makes contact with the nematocyst clusters it is quickly paralysed by Carukia barnesi’s powerful venom.

“It’s a highly successful fishing strategy, and the only account of a box jellyfish using aggressive mimicry to capture prey,” Mr Courtney said.

Being able to capture, transport, and house jellyfish specimens in a pristine state was essential to the research, Associate Professor Seymour said.

“Observing this species’ feeding behaviour in the ocean would be close to impossible, because they’re so small and almost invisible,” he said.

Carukia barnesi are attracted to light. By submerging high-powered lights in the waters off Double Island, just north of Cairns, the researchers were able to trap the jellyfish as they approached the lights.

The Carukia barnesi were then observed in a large, temperature-controlled tank in which the water rotates vertically, simulating local oceanic conditions. They were filmed through a complete night-day cycle, using infrared-sensitive equipment to record behaviour during times of complete darkness.

Carukia barnesi’s potentially fatal venom was extracted from each specimen for toxicology research by Associate Professor Seymour and others at JCU’s Australian Institute of Tropical Health and Medicine.

The researchers also share details of the time and place of each capture with Surf Life Saving Queensland.

Robert Courtney’s research is supported by the Australian Lions Foundation.

‘Prey Capture Ecology of the Cubozoan Carukia barnesi’ is published in PLOS One at http://journals.plos.org/plosone/article?id=10.1371/journal.pone.0124256