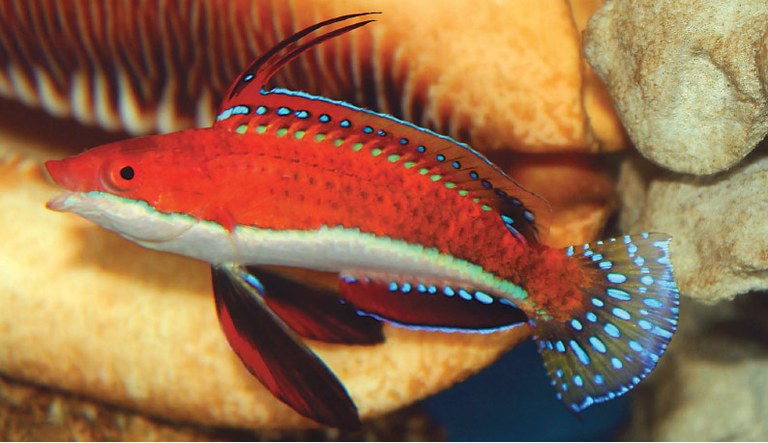 
Advances in technology have allowed taxonomists to more accurately define organisms as distinct species.  Such is the case with the spike-fin fairy wrasses, which includes Cirrhilabrus joanallenae (2000), C. naokoae (2009), C. humanni (2012), C. hygroxerus (2016), and C. rubriventralis (1974).  The date of their description is listed in parentheses; note how all but C. rubriventralis were only fairly recently described.

Now Cirrhilabrus rubriventralis is also being further broken up into two other new species: C. africanus and C. rubeus.  The split is based on mtDNA gene sequences, which show that spiked-finned fairy wrasses from different geographic locations were different enough to warrant being classified as distinct species (what biologists refer to as allopatric speciation).

C. africanus, is currently known from the Eastern coast of Africa, while C. rubeus is known from Sri Lanka and the Maldives.  The map below shows the geological distribution of all the spiked-finned fairy wrasses that are currently described.  You can clearly see how geography has defined speciation in this Cirrhilabrus complex.

The two new fairy wrasse species are described in the Journal of the Ocean Science Foundation.