Brittle stars are covered with thousands of light sensors 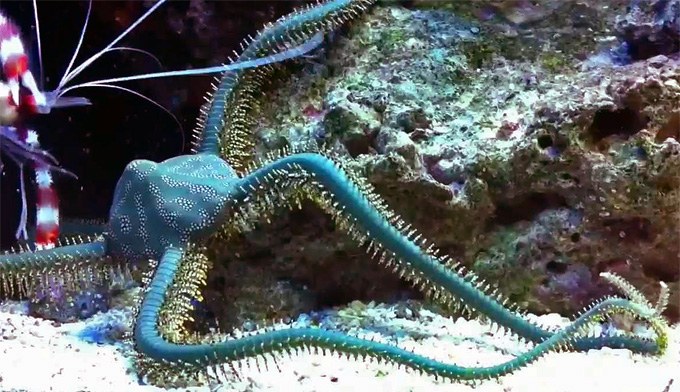 This green brittle star knows how to hide by “seeing” with its skin.


To learn more about brittle stars and their captive care, read James Fatheree’s article: “A Look at the Ophiuroids: Brittle, Serpent, and Basket Stars”

Brittle stars may ‘see’ with their skin

by University of Oxford

Scientists have discovered the first evidence that brittle stars living in vibrant coral reefs use thousands of light sensors to navigate their way through their complex environments.

The international team, led by researchers at Oxford University Museum of Natural History, investigated the brittle star Ophiocoma wendtii, a relative to sea stars and sea urchins, which lives in the bright and colourful reefs of the Caribbean Sea. Their findings are published in the Proceedings of the Royal Society B today.

This particular brittle star first captured scientific attention more than 30 years ago thanks to striking light-responsive behaviours such as dramatic colour changes between day and night, a very strong aversion to light, and rapid shelter-seeking when exposed — all achieved without any eyes.

An enormous number of microscopic crystal bumps were discovered over the tops of the animal’s arms, and for decades it has been suggested that these bumps might act as ‘microlenses’ in a visual system. These microlenses could be responsible for O. wendtii‘s incredible abilities, but no actual sensors had ever been found.

Lauren Sumner-Rooney, a research fellow at Oxford University Museum of Natural History and a sensory biologist, was intrigued by the unsolved mysteries of O. wendtii. Working with the Smithsonian Tropical Research Institute in Panama, the Museum für Naturkunde in Berlin, and Queen’s University Belfast, Sumner-Rooney and colleagues were able to test the brittle star’s ‘eyesight’ using new molecular tools. Using specially-designed fluorescent antibodies, they identified light-sensitive cells in O. wendtii for the first time.

Contrary to the prevailing theory, Sumner-Rooney and co-authors found that there were thousands of light-sensitive cells in the arms of the brittle stars, and that they were in fact embedded in the skin across the entire body.

“We were very surprised to find these photoreceptors in such huge numbers and all over the animals,” says Sumner-Rooney. “They really do cover every inch, top and bottom, and they’re very much dotted around at the surface in between what we previously thought were lenses, not underneath them. They certainly wouldn’t receive any focussed light.”

Even without any optical help from the lenses, behavioural experiments demonstrate for the first time that the brittle stars are able to detect shadows from a distance.

“This was really exciting,” adds Sumner-Rooney. “We’ve got the first evidence that these animals could be using their huge light-sensing network to ‘see’ distant patches of shade that might offer shelter from predators.”

If the animals do form an image, it’s likely to be very coarse, but on the crowded tropical reefs, disturbed brittle stars never have to look too far to make a dash for the nearest cover.

Although the team is the first to find the light sensors responsible, it remains a mystery how the brittle stars might use all the information they gather to see with their skins.

“It’s amazing that we’ve had this lens-based hypothesis for several decades, yet it seems that the actual mechanism behind Ophiocoma wendtii‘s incredible behaviour is even stranger than we thought,” says Sumner-Rooney.