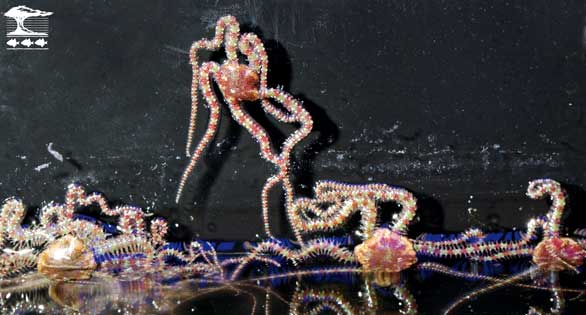 Spider-like, they emerged from all cracks and crevices. It looked almost like an alien invasion in a science fiction movie. Countless arms waved through the water, probed the environment, and attached themselves to rocks to pull themselves up. Each individual wanted to be first, to find the best place. The urge of a brittle star to climb—from the rock structure, up the aquarium glass, to the surface—is so powerful that some specimens came out of the water, standing on the bodies of their fellows. With almost blind zeal, half a hundred of these echinoderms assembled, as if following a secret command. However, it was not blind obedience or fear that drove them, but the irrepressible wish to MORE: Brittle Stars: White Wedding