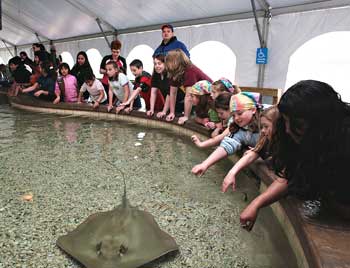 The Brookfield Zoo, in Brookfield, Illinois,. has sadly closed it’s Stingray Bay Exhibit for this season, after 54 Stingrays died in the tank on this past Friday. Oxygen levels in the water  tank suddenly plummeted. The malfunction affected the heating and cooling systems of the 16,000 gallon pool which held the rays. The rays were inside of a popular shallow tank, which allowed visitors to touch and interact the rays.The aquarium officials noticed the rays were acting strange and the monitor which keeps track of oxygen levels went off on Friday around 1:45 pm. The aquarium staff got to work immediately to try and figure out what was wrong, but time was not on their side. Sadly, all of the rays died.This is not the first time a malfunction has occurred in this aquarium. In 2008, many rays died due to a heater unit malfunctioning. The Aquarium is still investigating the cause of Friday’s tragic event. The Aquarium has stated it is devastated by the loss of these majestic animals and the investigation is underway to try and understand what occurred, and prevent it from ever happening again. The exhibit will remain closed the rest of this summer.  MORE