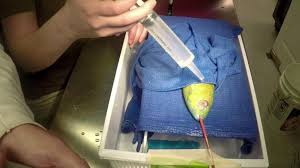 While some people view aquarium fish and tanks as beautiful pieces of art to be appreciated, there are many others who view their fish as part of the family. Julie Morgan is one of them. Morgan noticed that her seven year old saltwater fish named ‘Kiwi’ was getting bullied by other members of the tank, as the fish was going blind in one eye due to a cataract. “They figured out which eye was not working,” Morgan said. “They’d go up behind him, biting his tail. He had chunks of his tail taken out.” Morgan brought her one-eyed fish to her veterinarian, Dr. Megan Baebler. Dr. Baebler performed surgery on the fish, placing Kiwi under anesthesia, and removing the cataract, but also the eye. The surgery took thirty minutes. In an attempt to stop Kiwi from getting bullied, Dr. Baebler created a prosthetic eye. “I actually hand-painted the eye myself,” she said. “I used a mixture of some nail polish and some eye shadow pigments, actually, to give it some iridescence.” Morgan plans to eventually place Kiwi back with his other tank mates once he recovers: “A lot of other people would say, ‘Yes, put him down. Go ahead, it’s just a fish.’ Well, my opinion is nothing is just a something. And if I could give him quality of life, why not?” MORE