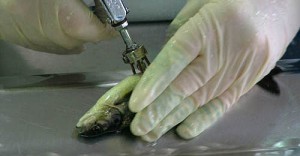 Could ich free fish be the wave of the future? Imagine if you were shopping for a new addition to your marine aquarium, and in addition to choosing between captive bred and wild caught, you could also choose between ich vaccinated and non-ich vaccinated. Vaccination of companion animals is common, and most of us protect our pets from fatal diseases like rabies and distemper, simply by getting them a common vaccine. So why hasn’t this taken place for marine fish?

Recently scientists decided to see if marine fish could really become immune to Cryptocaryon irritans, the infamous marine ich. In a control group of mullet, it was found that after initial exposure to the parasite and treatment, the fish didn’t become infected again in excess of six months. This led researchers to believe the fish had developed an immunity to the parasite. 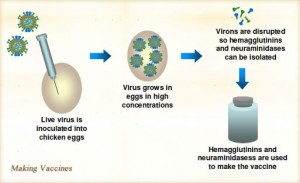 Normally around late September or October, signs start popping up in pharmacy windows advertising that the flu vaccine is in stock. Most health insurance providers encourage us to get the vaccine, simply by paying the full cost for it. Let’s stay out of the all the vaccine hoopla that surrounds reports of autism and mercury, and simply focus on the process by which vaccines prevent disease.

The goal with a vaccine is to stimulate the immune system to produce anti-bodies (substances used to fight disease), without actually infecting an animal with the disease. It’s sort of getting all the fringe benefits of getting sick, without actually having to suffer the symptoms, or worse, die. 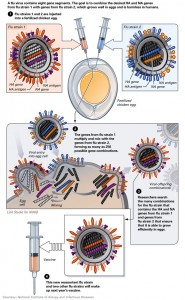 In labs pathogens of both bacteria and viruses are grown, by infecting tissue and harvesting live disease. To prevent the risk that a vaccine will actually infect something, the disease is often weakened, grown under a series of stress that make it less dangerous. In other cases the part of the pathogen that causes an immune response is taken out, and used to create a vaccine. For vaccines such as the tetanus vaccine, the toxin the pathogen makes is deactivated, then conditioned so the body can recognize it. In all cases, vaccines make a body automatically identify a pathogen and automatically know exactly what antibodies to administer to destroy it. It doesn’t prevent something from contracting a pathogen, it just makes sure that if they do, instantly the body is able to cripple it and prevent illness. This is why even if your pet is vaccinated against rabies, if they are exposed to a potentially rabid animal and you are exposed to their saliva, it is recommended you too become vaccinated against the virus, since there is still a chance the virus is alive in your pet’s saliva.

In the case of fish: 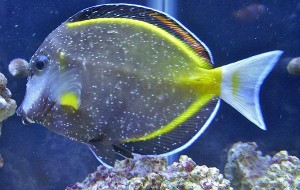 Once researchers were confident that fish were becoming temporarily immune to marine ich, they decided to see if they could stimulate an immune response that could at will, create that temporary immunity. First, a test group of groupers (no pun intended) were given an injection of formalin killed C.irritans theronts. This would hopefully signal an immune response in the fish, allowing their bodies to identify the parasite and “remember” an antibody that can kill it. Other fish were exposed to a low level of C.irritans tomonts, with the hope that instead of catching full blown ich, their bodies would produce an antibody, identify the parasitic threat and nullify it.

In the test group of immunized groupers, no mortality was experienced when they were exposed to a full blown marine ich infested system. A culture of mucous and tissue showed a very low level of under-developed ich cysts and a high presence of a defensive mucous. 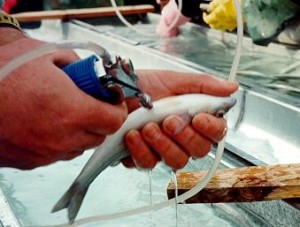 The group of fish exposed to low levels of tomonts, then exposed to an ich infested system, produced a mortality rate of 40%. When looking at tissue and mucous secretions, there was a mix of developed cysts and defensive mucous. This leads scientists to believe that when exposed to ich, some fish will develop an immunity, while others will simply succumb to the parasite and perish. 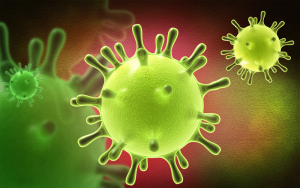 This string of research has unlocked two important details. One, it’s now been tested and proven that fish can become immune to ich. The groupers who were given an immunization consisting of formalin killed theronts were able to prevent adhesion of the parasite, and under-development of cysts by producing a mucous antibody. Considering that 100% of the immunized fish survived exposure to ich, preventing it from properly adhering or developing is exciting.

This research also shows that not all fish exposed to ich will develop the same immunity, even when exposed to low levels. 60% of the control group did, while the other 40% ended up perishing from the parasite. At the very least, it’s now proven that the ich “immunity” reported by aquarists is not a fairy tale, but a proven reality.

Since the control group consisted entirely of one grouper species, does this mean that immunization and immunity only occurs in groupers, or select species of groupers? Also, what makes it possible for some fish species, when exposed to ich, to generate an immunity? Perhaps most importantly, how long does the vaccination induced immunity last, and how often would fish need re-vaccinated? Since most of us don’t have the skill or means to remove fish from our tanks and inject them, would it be possible to use a food or liquid to vaccinate fish against parasites?

Exciting, but not revolutionary: 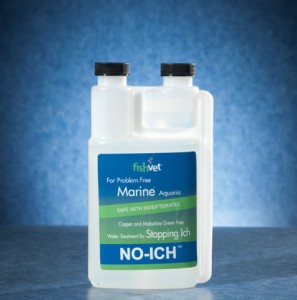 Even if a long-term, proven, ich vaccine existed and even if we could purchase fish that were vaccinated, I cannot see ich vaccination taking the place of rigorous quarantine. Ich is one of many marine fish parasites which produces a set of symptoms commonly seen in aquarium fish. This includes salt or sugar like spots, excessive mucous, cloudy eyes, listlessness and rapid respiration. It’s possible that many aquarists diagnose fish with ich, but are actually dealing with marine velvet, or another type of parasite. Even if you had an ich vaccinated fish, it would be entirely possible that upon exposure to another parasite in your system, they would simply get sick.

The most exciting part of the research to me, exists in the form of knowing that on immune fish, under-developed parasitic cysts were found. This means that even if a fish survived a parasitic outbreak and appeared healthy, it could still harbor the parasite which could theoretically infect other fish. While one could jump to the conclusion that an ich vaccine would make life easier for aquarists, by reducing the need for quarantine, in fact the research already done just strengthens the case for it.