Cal State Long Beach’s Shark Lab has been helping the world better understand Great White Sharks for the past 50 years. The research has been featured on tv networks and journals. Director Christopher Lowe has appeared on the Discovery Channel’s “Live From the Shark Cage” and “Great White Invasion,” as well as a half-dozen shows each for National Geographic and BBC/NOVA. The lab’s research on juvenile white sharks is featured in a new 3D IMAX film now playing around the world. 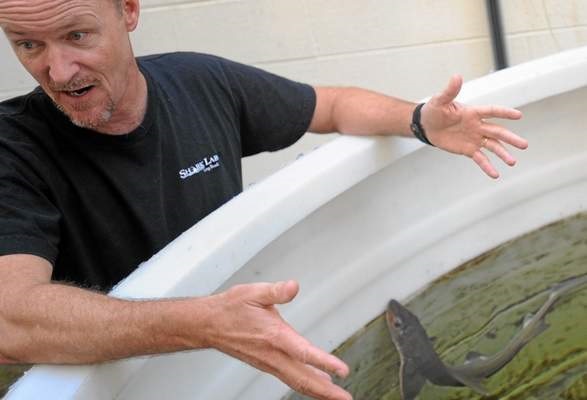 Director Christopher Lowe checks out a grey smooth hound shark at the CSULB Shark Lab, which is dedicated to the study of the physiological and behavioral ecology of sharks, rays, and other economically important gamefish in Long Beach, CA.

The Shark Lab’s success starts with it’s constantly improving technology in the classroom. Among a variety of research tools, the Shark Lab boasts recirculating seawater tanks for sharks and fish, a seawater table for rays, an electronics lab to test equipment and make transmitters, and respirometers for measuring metabolic rates of game fish off the coast.

The Shark Lab’s latest development is robotic equipment that travels with sharks as they move through the ocean, sending back environmental data related to light, salinity, depth and other factors that impact the creature.

“This is the wave of the future,” Director Christopher Lowe said. “Development of autonomous underwater vehicles that can map the seafloor, sample the water, track a shark, count schools of fishes and then bring all that data back to us at the lab will change how we study the ocean and the organisms in it.”  More