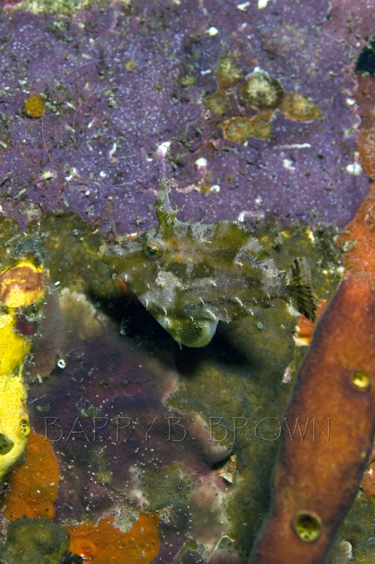 Hi all, I have a super camouflaged, very hidden, Fringed Filefish for you all today that we found hiding on the side of a giant pillar that was holding up a monster sized pier.

These little two inch fish are masters of camouflage and have the ability to change colors in a split second mimicking almost any underwater background color, it’s one of those things I just can’t explain you have to see it to believe it. Appearing very much like their close relatives the triggerfish, filefish are rhomboid-shaped fish that have beautifully elaborate cryptic patterns. Deeply keeled bodies give a false impression of size when these fish are viewed facing the flanks. Filefish have soft, simple fins with comparatively small pectoral fins and truncated, fan-shaped tail fins; a slender, retractable spine crowns the head.

Although there are usually two of these spines, the second spine is greatly reduced, being used only to lock the first spine in the erect position; this explains the family name Monacanthidae, from the Greek monos meaning “one” and akantha meaning “thorn”. Some species also have recurved spines on the base of the tail (caudal peduncle). The small terminal mouths of filefish have specialized incisor teeth on the upper and lower jaw; in the upper jaw there are four teeth in the inner series and six in the outer series; in the lower jaw, there are 4-6 in an outer series only. MORE