Recent findings from a 16 year international study about coral spawning has created a link between the spectacular event, and the ongoing increase in sea-surface temperature. Co-author Jeff Maynard from the research institute CRIOBE, in French Polynesia, explains how the seasons can cause spawning events, both on a small and large-scale:  “Sea temperature increases are greatest in the periods just before summer. Our ongoing research using climate models suggests summer in many reef areas will come earlier and last longer in the future. The effect this might have on coral reef ecosystems is an important area for further research. 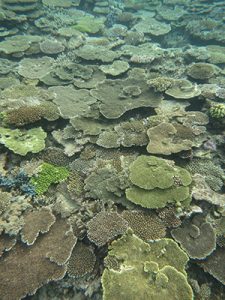 ” On the Great Barrier Reef corals species of all types are found spawning throughout a long duration of warmer seasonal months, from September to March, yet mass spawning events only happen a couple times a year. Assistant Professor Sally Keith from the Center for Macroecology, Evolution and Climate in Copenhagen explains how the temperatures can vary between locations, and how some species are triggered at the same time with different temperatures: “There would appear to be no optimum temperature for spawning, at least beyond the scale of the local coral population. We found corals on Lord Howe Island, off the eastern coast of Australia, spawn when the sea water is 22 degrees Celsius, whereas in the Persian Gulf the same species spawn when the temperature is 32 degrees Celsius. So the most important thing seems to be for corals to spawn together to maximise fertilization success.” The idea that we might be able to predict these spawning events has both scientific and economic benefits, whereas the tourism industry might see a spike during predicted spawning months, and scientist can better advise coastal development projects, such as dredging. Certainly reducing risk of damaging reefs, and increasing local revenue will be an ecological benefit to the animals and people as a whole. Read more here!