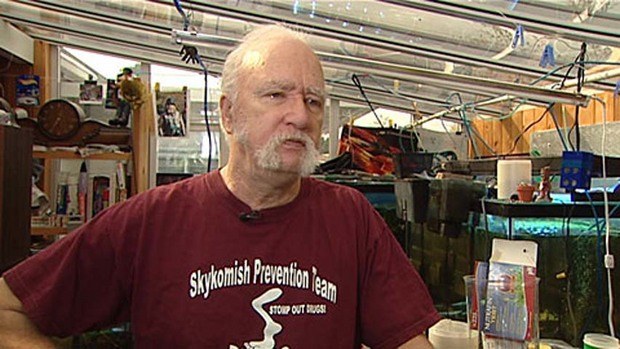 
Mike Baynes, 67, is an avid aquarist living in Surrey, BC.  Due to his $450/month electrical bill, his home was flagged and searched by a team of electrical and fire inspectors (with Royal Canadian Mounted Police escort) but was found in good legal standing.  Nevertheless, the inspectors forced Byanes to pay for electrical inspections and perform electrical upgrades to his aquariums with a total cost of $800.

Says Baynes: “I feel violated.  I think that is an invasion of privacy. I don’t think that the City of Surrey has anything to do with my hydro consumption. […] When you don’t find anything — and you still look for a reason [to issue an order] — I call that harassment. And I’m paying for that. I pay taxes here.”

British Columbia is notorious for its marijuana grow operations.  Local officials in this Canadian province have taken actions to curb illegal activities, raising concerns about civil liberties and government overreach.  Seven BC cities are registered with BC Hydro (BC’s chief electrical provider) to monitor electrical usage of their citizens as permitted by provincial bylaws.  Any household with over three times average usage is flagged.  Local officials may then order searches on these houses, with warrants issued for non-compliant home owners.

Since the inspection program began in 2005, the city of Surrey has inspected over 2,200 homes, roughly half of which were confirmed marijuana grow-ops.  Of the other law-abiding half, over 400 homes were forced to complete similar electrical work orders as Baynes.